Obama allies warn McCain camp to back off attacks

ASHEVILLE, N.C. - Barack Obama’s allies warn that John McCain’s attacks on the Democrat’s character will lead to the political equivalent of mutual assured destruction: fire your big weapon at your own peril.

Several Obama surrogates said his supporters may start reminding voters of McCain’s ties to Charles Keating, a convicted savings and loan owner whose actions two decades ago triggered a Senate ethics investigation that involved McCain as one of the “Keating Five.”

The warnings of massive retaliation came as McCain’s running mate, Alaska Gov. Sarah Palin, took on the role of attacker and said that Obama sees America as so imperfect “that he’s palling around with terrorists who would target their own country.”

She was referring to an early Obama supporter, 1960s radical Bill Ayers, a founder of the Weather Underground whose members were blamed for several bombings when Obama was a child.

Obama has denounced Ayer’s radical views and activities. But he’s not above questioning McCain’s character with loaded words.

On Sunday Obama unveiled a TV ad on the economy that paints McCain was “erratic in a crisis.” Some see that as a reminder of McCain’s age, 72.

Democrats were well-synchronized Sunday, using the word “erratic” and Keating’s name in nearly-matching sentences across the talk show circuit.

“This is going to be a month, I think, of character assassination,” Sen. Dianne Feinstein, D-Calif., an Obama supporter, said on CBS’s “Face the Nation.”

“We are looking forward to turning a page on this financial crisis and getting back to discussing Mr. Obama’s aggressively liberal record and how he will be too risky for Americans,” he said in a recent conference call with reporters.

Obama, too, alluded to harsher tactics in a speech Sunday to thousands of people in Asheville, N.C.

McCain and his aides, Obama said, “are gambling that he can distract you with smears rather than talk to you about substance. They’d rather try to tear our campaign down than lift this country up. It’s what you do when you’re out of touch, out of ideas, and running out of time.”

Noting the nation’s serious economic problems, Obama said: “Yet instead of addressing these crises, Senator McCain’s campaign has announced that they plan to turn the page on the discussion about our economy and spend the final weeks of this campaign launching Swiftboat-style attacks on me.”

Obama has denounced Ayers’ radical views and activities. However, Ayers hosted a small gathering for Obama in 1995, early in his political career. Obama and Ayers live in the same Chicago neighborhood and served on a charity board together, but there is no evidence they have palled around.

“If we are going to go down this road, you know, Barack Obama was eight years old, somehow responsible for Bill Ayers,” he said. “At 58, John McCain was associating with Charles Keating.”

“If we really want to talk who is associating with who, we will,” Emanuel said. “The American people will lose in that transaction.”

Just months into his Senate career, in the late 1980s, McCain made what he has called “the worst mistake of my life.” He participated in two meetings with banking regulators on behalf of Keating, a friend, campaign contributor and S&L financier who was later convicted of securities fraud.

The Senate ethics committee investigated five senators’ relationships with Keating. It cited McCain for a lesser role than the others, but faulted his “poor judgment.”

In the new Obama ad, an announcer says: “Our financial system in turmoil. And John McCain? Erratic in a crisis. Out of touch on the economy.”

The ad, slated to start running Monday on national cable, alludes to McCain’s response to the nation’s financial crisis. He briefly suspended his campaign, called for a White House summit meeting that ended chaotically, and showed varying degrees of support for the massive rescue bill Congress passed Friday.

“In the midst of it all, I think you saw Sen. McCain, unlike Sen. Obama, come off the campaign trail, because that’s John McCain in the middle of a crisis,” said Sen. Joseph Lieberman of Connecticut, an independent-Democrat who backs McCain.

Obama has no character to be assassinated.

This “election” is degrading rapidly to shit. Both sides are abandoning any issues in favor of slandering each other.

McCain: You hung around with a radical from the 60’s.

Obama: You hung around with an embezzler and a thief.

McCain: You went to a radical black church.

Obama: Your VP went to a witch doctor.

Obama: You cheated on your wife and abandoned her.

McCain: Your black and I’m not.

This would almost be funny, except that on Nov. 5th one of these clowns will be president.

sounds like they are scerred. Keating…good one. He was already investigated and and cleared of any wrong doing.

I think this needs to be reiterated.

Beat me to it. He’s a Chicago insider. I don’t know whose running things since Mooney Giancana caught a bullet but you can bet the Outfit runs the guy, along with Mayor Daley. He’s a fucking puppet with so much criminal connections they probably chose him because he’d HAVE to be a puppet.

That was only an example of the fun to come. We all know he gave back the 100k and his dismissal as well as John Glenns had nothing to do with their past. Anything else would be political favors and we know Obama never recieved those from anyone.

Just ask him or anyone else. If this were to be true it proves he not ready lead in DC, lies and dirty tricks are business as usual.

“Sarah Barracuda” is on the stump doing the very thing, Mick.

Good find FightingIrish. I hadn’t been paying much attention to this because all I heard on the news was old 60’s radicals blah blah blah.

I didn’t realize it was The Weathermen they were talking about. They were like a domestic Maoist Shining Path/Al Qaeda. They even declared war on the US like Osama did. They did a bunch of attacks and killed quite a few people. Their last attack was the Brinks robbery back in the 80’s.

Obama really is a radical leftist if he is rolling with that crew.

[quote]Mick28 wrote:
But, if McCain or someone doesn’t start talking about these things to the undecideds we are all going to be saying “President obama” real soon. [/quote]

Are you saying that McCain can’t win on his experience and the issues? I would hate think that anyone could win by being the better liar. This is a gross insult by both of them to the people, the process and the election. I think they are both making a very large and terrible mistake.

McCain has many ghosts in his closet, the same as anyone who has been in Washington for 26 years. Mrs. Palin is already inviting the sludge machine to her direction.

Some much for the theory of protecting her. Her current investigation, her affair will all become cannon fodder. Ever voter will be subjected to a massive debate on his age.

How will this affect Obama? He bring out the same line used forever. This is just another attack on the black community with the same old tired racist lies. Is this fair? All cards, race, age, sex, and anything else will be on the table.

First the bailout and now this. Wonder how many people will be voting for Nader? After the bailout I will be.

My point was to show that this is what it has devolved to, and it’s McCain’s campaign grasping at whatever they can to try and right the sinking ship.

As RJ might say, you might want to get used to it- calling Obama “Mr. President” will be in all of your futures.

[quote]Sifu wrote:
Good find FightingIrish. I hadn’t been paying much attention to this because all I heard on the news was old 60’s radicals blah blah blah.

I didn’t realize it was The Weathermen they were talking about. They were like a domestic Maoist Shining Path/Al Qaeda. They even declared war on the US like Osama did. They did a bunch of attacks and killed quite a few people. Their last attack was the Brinks robbery back in the 80’s.

Obama really is a radical leftist if he is rolling with that crew.

That went right over your head, huh?

I’ve been reading a lot about it- there’s no evidence that he’s “rolling” with any crew of terrorists. It’s just a guy he knew- very different than McCain and his Keating Five.

Upon learning that Barack Obama had clinched the Democratic presidential nomination over Hillary Clinton, Sarah Palin exclaimed “so Sambo beat the bitch!”

I found this story quite touching. 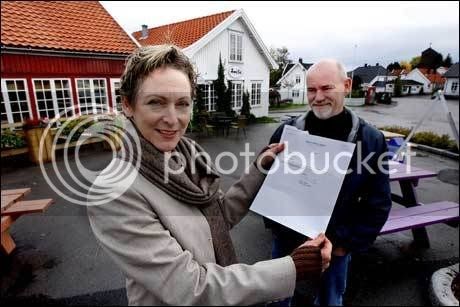 Or does it? This is a story from the Norwegian newspaper VG , the biggest newspaper in the country, from today's edition. Not that these th...

I think in the current environment, trading an Ayers for a Keating ad is a bad deal for McCain. Unfortunately for him though, with the way his numbers have been falling in the last few weeks he will have no choice but to take bigger and bigger gambles in hopes of upsetting the status quo. I think we should expect a messy finish here. It should be fun (to watch).

My point was to show that this is what it has devolved to, and it’s McCain’s campaign grasping at whatever they can to try and right the sinking ship.

As RJ might say, you might want to get used to it- calling Obama “Mr. President” will be in all of your futures.

Obabma has baggage. Lots and lots of baggage for someone so young.

How is it “devolving” to something for McCain to point this out?

Its not like Opie is going to tell the truth about his relationship with a terrorist, or his love for a racist church, or how many dicks he (or his fugly-assed wife) had to suck to become one of the top dogs in the Chicago political machine.

The press, for all the crying they are doing about the “vetting process” for Plain, have never made an honest attempt at vetting Opie.

If he wins, you should get real comfortable saying “President Biden”. Opie will not last 2 years in office. He raises taxes, and he will be replaced much sooner than 2 years.