Just hit 35 and due to an acute injury over a year ago, and years of heavy training, I’ve got 3 discs bulged in my neck and the one at 5/6 is possibly herniated. My left arm is weak, hurts like hell and my entire upper body seems “turned down” neurologically.

Bad timing as well, just came off a cycle and this happened. Lost 22lbs in 8 weeks!! Seeing a C-Spine Ortho doc next Wed.

Anyone here overcome a similar injury WITHOUT surgery? Thanks in advance.

I had C5-C7 diskectomy and fusion, and I’m glad I did.

Not without surgery man.

I’ve had it twice. Once in 1999, again in 2004. In 99 there was one herniated and one bulging. The neurosurgeon removed and fused the herniated disk, and left the bulging disk alone because “it was asymptomatic” as he put it. In 04 it herniated and became “symptomatic” and had to go as well. I never had pain, just twitching, numbness and weakness.

I have fusions at c4-5 and c5-6. So essentially 3 disks are now one big one. Since they are low down on the cervical chain, I have negligible side to side limitation of movement, but I can’t touch my chin to my chest anymore. I’ll take that any day over an arm that dangles limp from my shoulder. I have fully recovered, and since the last surgery, I have been in some of the best shape of my life. I just don’t lift heavy over head anymore.

Glad to hear you guys are doing better, but I’m going to hold off on surgery for as long as possible.
My pain right now is not that bad, and I’m not completely shut down on the left. I still work out fairly hard, but with pussy weights.
Hope to hear some NONsurgical success stories!
I’ve also heard they can do endoscopic discectomies now?

Hey, I have a herniation at C4/C5. I had some weakness in the right shoulder/arm, but mainly it was the radiating pain down the arm into the hand that was worse. ART and trigger point work eventually solved the problem. I’m no doctor but that may be something to check out just in case.

I am 46 and had the same problem 15 months ago with a left C6 herniation. I had all the typical symptoms…neck pain, left arm pain, numbness in my left index finger and thumb. After the MRI and CT w/contrast the neurosurgeon recommended fusion. I balked only because my work schedule would not allow me to miss 2-3 weeks. I stayed on pain meds and muscle relaxants for three months before the pain began to subside.

During that time I used a home cervical traction device nearly every day and my brother (an upper cervical chiropractor) did some work on my atlas. I am convinced that both helped me recover quicker and postpone surgery.

Once the pain decreased I started lifting again to regain my strength after several years of inactivity. It took several months to work through the arm pain but 11 months later I am almost as strong as I was 20 years ago and I can now lift heavy (for me) without any problems. I only have some residual neck pain and mild numbness in my left index finger.

I am not naive enough to think I won’t have this problem again in the future but I want to postpone the inevitable as long as possible for two reasons.

Consider carefully how long you put off surgery. Most likely the pain you feel in your shoulder/arm is due to the bulging disc pinching a nerve. Waiting too long can result in nerve damage (i.e. the pain never goes away even after surgery).

I had discetomy/fusion surgery in May for a herniation at C6. The initial pain was not significant and lasted only a couple of weeks. The weakness in my left tricep however was profound. I could not perform a tricep extension with a 5 lb dumbell. The MRI showed that the herniation was displacing my spinal cord. The weakness persisted and we were quite sure of nerve damage. The surgery was successful and I was training with light weights after 7 weeks. Today, I am training as hard as ever. My left tricep is at about 70%. I still have occasional numbness/tingling in my left arm and fingers. I am glad I had the surgery nad would agree with the previous poster’s comments about nerve damage concerns. I’m 50 years old.

I had exactly the same levels done and I’m glad too.

By 23 I had horrible bilateral hand numbness Headaches. Terrible shoulder problems. I got Diagnosed with a torn rotator cuff hey it was the 80’s.

My brother was a Crazy Chiropractor, Hey adjusted me and I got such improvement, I quit my medical school and decided to go to Chiro college.

Find a Chiropractor that knows how to Correct posture.

Strengthen your Posterior Chain, Get a copy of precision nutrition from John Berardi.

You will be amazed at the results.

I’m 46. Two years ago (Dec 28th,will be two years) I had C5-C6 ,C6-C7 removed and fused with a titanium plate a six screws. I was experiencing numbness and tingling in my right arm and hand, pain down my right arm, pain that felt like it was right under my right scapula,and almost no range of motion in my neck.

I first noticed the symptoms while skiing, I would lose feeling in my right hand.Then when I was running I would experience the tingling. I went to see a Spinal Surgeon and was told I had spinal stenosis between C5-C6 and would one day require surgery, but my surgeon was in no rush, especially after

I told him my experience with shoulder impingement surgery that resulted in a frozen shoulder, despite dilligent adherence to PT (only ART helped, HIGHLY recommend it). Anyway my surgeon said let’s just monitor irt and if the symptoms get worse, we’ll operate.

I was running in Central Park and a guy on a mountain bike ran me over at full speed. Soon after the sypmtoms got real bad, it was very difficult to even sleep. My right arm had shrivelled pretty badly. I went for my EMG tests and was told the nerves weren’t firing near capacity and they said surgery was needed iimmediately.

I had the surgery and all the neck pain ,shoulder, scapula and arm pain went away. Almost immediately. The only symptom I’m left with is numbness in my right thumb, no big deal. I started hitting the weights right after surgery and and now, two years later, am where I was before everything turned south. Make sure you get second,third opinions, find a good doctor ( I was in Manhattan and was frotunate to find a great spine guy). Good luck!

Thanks again for all the replies. Saw a C-spine orthopaedic surgeon yesterday. Looked at my MRI’s and he and his PA performed several manual tests. Most embarrasing was holding both arms up, bent at elbow with palms facing me. They tried to pull down my right arm–no dice. Left arm, they could pull down easily! So today I’m getting a selective CT-guided neuralforaminal injection near the root of 5/6. Surgeon remarkably did not recommend surgery.
I would like to know more about what some of you guys did in terms of nonsurgical treatments such as chiro (how could that help?), maybe accupuncture? What is ART? Thanks again for the replies and advice.

I don’t suffer from a cervical disc herniation, but rather simply a degenerative disc. The space between C5 and C6 is narrowing, and occasionally the spinal cord will get irritated. When that happens, both my neck and traps will get stiff/knotted. My cervical orthopedist here in the DC area prescribed Celebrex and physical therapy. The PT was useless for alleviating the symptoms, so I tried deep tissue massage. Worked much better. Since then, I’ve been taking Glucosamine & Chondroitin with MSM, along with salmon oil. The pain is down dramatically, but is still there. Someday I expect I’ll need to have the disc removed and the vertebra fused, but not yet.

Perhaps this might be of interest to the folks reading this thread: 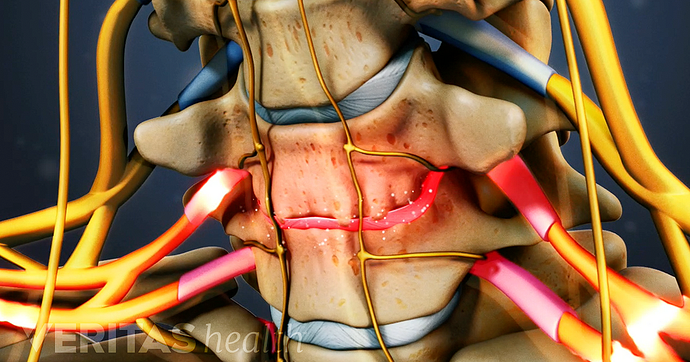 These are the key points to consider when deciding who makes a good candidate for cervical artificial disc replacement surgery.

It doesn’t appear that cervical disc replacement is widespread just yet, and isn’t available outside of medical trials in the U.S. (but is in Europe and other areas). The procedure looks very promising, and I’ll likely undergo it in another 5-10 years if things get that bad.

Well Chiro will only help if you find someone that will re establish the lordosis of the cervical spine.

Disc herniate due to abnormal load and shear forces applied to them.

If you cervical spine does not have the normal alignment you end up with compressive force on the front of the disc and traction forces at the back this leads to tears in the disc fibers. Which leads to bulging and eventual Herniation.

Restoring the curve will allow the forces acting on the disc to normalize. Thus actually allowing healing.

It has been demonstrated through medical research that discs do heal.

Not just any Chiropractor will work although all will say they can help.

It takes special training to know how to do this.

But it does work.