The largest tax increase in history to fix a problem that doesn’t exist.

Not only that they wanted it passed by Friday so that nobody has a chance to read it. 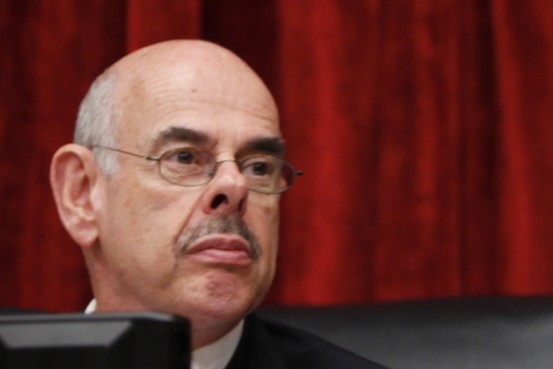 The Cap and Tax Fiction

In a way I hope the Democrats get this. It will be an absolute gift for the Republicans in 2012.

We will need to live under this tax for the next few years and let it hit hard enough for it to make a difference in Obama lovers minds.

It’s the greatest scam, aside from the election of Obama, to ever happen in the US.

This is in response to Warren Buffet restating his criticism of cap and trade:

Warren Buffett to CNBC: U.S. Economy In "Shambles" .. No Signs of Recovery Yet

In a live interview on CNBC today, Warren Buffett said there has been little progress over the past few months in the "economic war" being fought by the country.  "We haven't got the economy moving yet."

Now the democrooks want to fist fuck this bill through as quickly as they can before anyone can see it really is, a huge regressive tax. Truly pathetic bunch of losers they all are.

Of course we won’t hear a peep of this from the media. The great messiah commander hope’n’change has all of our best interests in mind.

These first few months have been everything I feared they would be.

But but but Hope change YES WE CAN!!!. You mean he isn’t going to magically fix everything while at the same time not raise my taxes!!! I thought he would only steal it from those evil rich people.

The thought process some of these people must have went through is truly mindbogglingly. Lets hope 2010 we can get the house and senate back to delay the destruction this messiah so desperately wants.

If we don’t get a grip on this shit fast folks, and cap and trade is just one slimy arm on this monstrous octopus, we are really really in trouble.

[quote]Tiribulus wrote:
If we don’t get a grip on this shit fast folks, and cap and trade is just one slimy arm on this monstrous octopus, we are really really in trouble. [/quote]

Yep, I can’t believe fools actually thought only the rich would get whacked. I guess the rich are those who actually pay in taxes.

Thats a good one.

Can someone who DOES believe in human-caused, EPIC DOOM, global warming comment on cap-and-trade?

I’m saying this because it is quite obvious those who don’t believe in the above will obviously not support cap-and-trade. I’m interested if anyone who DOES believe the above dissents from the cap-and-trade support-orgy.

Backlash’s are always enormous. Between Health Care, Cap and Trade and poor economic decisions you will see a sweep in 2012. Throw in the naive lack of direction on national security and it becomes a foregone conclusion.

I’d rather the dems keep control of congress in 2010, so in 2012, Obama can’t blame congressional GOP for the problems he is causing. They will really impact in the 2011/2012 time frame, IMHO. His sycophants are excellent spinners and with the MSM in the bag, it’s predictable.

The scary part is, even the idiots who will vote for this will not be allowed to read it before voting on it.

Fiscal Policy: The House of Representatives is preparing to vote on an anti-stimulus package that in the name of saving the earth will destroy the American economy. Smoot-Hawley will seem like a speed bump.

The 1,000-plus-page American Clean Energy and Security Act (H.R. 2454) is being rushed to a vote by House Speaker Nancy Pelosi before anyone can seriously object to this economic suicide pact.

It’s what Janet Napolitano, secretary of Homeland Security, might call a “man-caused disaster,” a phrase she coined to replace the politically incorrect “terrorist attack.” But no terrorist could ever dream of inflicting as much damage as this bill.

Its centerpiece is a “cap and trade” provision that has been rightfully derided as “cap and tax.” It is in fact a tax on energy everywhere it is consumed on everything it is used to make or provide.

It is the largest tax increase in American history â?? a tax on all Americans â?? even the 95% that President Obama pledged would never see a tax increase.

It’s a political bill that could come to a vote now that a deal was struck with farm-state legislators concerned about the taxation of even bovine flatulence.

As part of the agreement reached Tuesday night and announced by Rep. Henry Waxman, D-Beverly Hills, agricultural oversight for cap-and-trade was transferred from the Environmental Protection Agency to the U.S. Department of Agriculture.

Farmers hope the USDA will be less intrusive. The EPA has been tasked by a Supreme Court ruling to regulate greenhouse gas emissions from your nostrils to your lawn mower. This even covers the emissions of barnyard animals, including the methane from cows.

The American Farm Bureau warns that cap and trade would cost the average farmer $175 on every dairy cow and $80 for beef cattle. So farm-state politics trumped climate change.

We all know about farmers paid not to grow food. But now, American taxpayers apparently will be paying companies not to chop down trees. The Washington Times reports that as part of the legislation, the House will also be voting Friday on a plan to pay domestic and international companies around the world not to cut down trees.

Such offsets “would be a transfer of wealth overseas,” said William Kovacs, vice president for environmental affairs at the U.S. Chamber of Commerce. So if a tree falls in a Brazilian forest, does a U.S. taxpayer make a sound?

As we’ve said before, capping emissions is capping economic growth. An analysis of Waxman-Markey by the Heritage Foundation projects that by 2035 it would reduce aggregate gross domestic product by $7.4 trillion. In an average year, 844,000 jobs would be destroyed, with peak years seeing unemployment rise by almost 2 million (see charts below).

Consumers would pay through the nose as electricity rates would necessarily skyrocket, as President Obama once put it, by 90% adjusted for inflation. Inflation-adjusted gasoline prices would rise 74%, residential natural gas prices by 55% and the average family’s annual energy bill by $1,500.

Hit hardest by all this would be the “95% of working families” Obama keeps mentioning as being protected from increased taxation. They are protected, that is, unless they use energy. Then they’ll be hit by this draconian energy tax.

And what would we get for all this pain? According to an analysis by Chip Knappenberger, administrator of the World Climate Report, the reduction of U.S. CO2 emissions to 83% below 2005 levels by 2050 â?? the goal of the Waxman-Markey bill â?? would reduce global temperature in 2050 by a mere 0.05 degree Celsius.

President Obama has called on the U.S. to “lead by example” on global warming. During the campaign, he said: “We can’t drive our SUVs and eat as much as we want and keep our homes on 72 degrees at all times . . . and then just expect that other countries are going to say OK.”

Soon we may not be able to. Other countries can just sit back and watch us destroy ourselves. Where will you be when the lights go out?

This is turning into a big shit sandwich. And we’re all gonna have to take a bite. But I have extra Mentos if anyone wants some. At least I can sleep at night knowing I have no part in this fiasco. I think Obama’s strategy is, “The bigger the lie the more people believe it.” and we all know who said that first back in the 1940s…

[quote]Rockscar wrote:
We will need to live under this tax for the next few years and let it hit hard enough for it to make a difference in Obama lovers minds.

It’s the greatest scam, aside from the election of Obama, to ever happen in the US.[/quote]

What are you talking about?! 95% of Americans are going to get a tax cut. Jeebus, you conservatives are such a bunch of paranoid fear mongering liars.

The Dems own this thing 100%. What a gift for the 2010 mid terms. Hopefully it can get dismantled before it really gets going.

The Dems own this thing 100%. What a gift for the 2010 mid terms. Hopefully it can get dismantled before it really gets going.[/quote]

I’m becoming increasingly convinced that the GOP is almost completely lost. They’ve already shown us what they’ll do if given the reigns. Although it’s hard to imagine anything they could do being worse than the systematic dismantling of what’s left of the United States were witnessing now.

After this the GOP is guaranteed a revival, If not I’m taking up necromancy to bring back Reagan.

I find it funny that Alex Jones continues to predict all these things (9/11, Obama’s real agenda to destroy America, flu epidemic) and yet he is still considered a nut job.

[quote]nik133 wrote:
I find it funny that Alex Jones continues to predict all these things (9/11, Obama’s real agenda to destroy America, flu epidemic) and yet he is still considered a nut job.[/quote]