not sure if this belongs in pharma but this was the closest category. question is there any long term cannabis users here that have seen (or felt for that matter) cannabis usage affecting their hormones in a negative manner? and if so is this shown in your bloods? I have recently begun using cannabis frequently(almost daily more as needed now), in the form of a tincture or edible. I generally use 50mg.

Studies are conflicting; some say it hurts TT and others say it helps, both with varying methods of testing.

I’d imagine the stress reduction and better sleep associated with cannabis would increase TT about as much as if you’d reduced your stress and improved your sleep naturally though.

this was kindof what i was wondering. i wasn’t sure if the studies claiming it lowers tt or lh had a distinct chemical reason for it doing such or if its more a lifestyle issue.

From what I have read, it seems to lower TT/FT in short term users. I think it could be that they are more “messed” up, and sleep is impacted. I think long term users are statistically the same for TT/FT as non-users (based on an article I read that was about a study done).

some say it hurts TT and others say it helps

From what I’ve seen, smoking occasionally can lower stress and raise TT short term, but chronic use eventually lowers TT over time. Maybe one of those things where a little is ok but too much is bad

i’m ideally going to be a short term user, and even though I feel good using it and think it could be helping, your body can lie and how you feel always isn’t the bodily reality

From what I’ve seen, smoking occasionally can lower stress and raise TT short term, but chronic use eventually lowers TT over time.

This contradicts what I have seen. They looked at Jamaican men that smoked at least daily for their long term users. They weren’t different than non-smokers in a statistically significant way.

There could be something about Jamaican men, that they have higher numbers than average, and they are experiencing a lowering effect, it just isn’t seen because they are inline with other users.

I’ll say I doubt it has anywhere near the impact of booze.

Marijuana use and serum testosterone concentrations among U.S. males

Marijuana has been reported to have several effects on the male reproductive system. Marijuana has previously been linked to reduced adult testosterone, however, a study in Denmark reported increased testosterone concentrations among marijuana users....

The biologic mechanism by which marijuana exerts an effect on hormone production likely involves the response of cannabinoid receptors, CB1 and CB2, to THC. These receptors are functional in male reproductive organs, including the Leydig cells of the testis, the principle producer of testosterone in men. Leydig cell testosterone production decreases with age, but changes in testosterone production also occur as a result of alteration of the intracellular redox environment (Beattie et al., 2015), which can lead to oxidative stress and damage to cellular components. Environmental factors like marijuana use could play a role in this alteration. Further, Leydig cell aging may explain the more pronounced effect of marijuana among men aged 18 – 29 years compared to men ≥ 30 years. As Leydig cells age, they may be less resistant to the detrimental effects of oxidative stress.

A particular strength of our study is the use of a large population-based sample representative of the U.S. population with sufficient information on demographic and lifestyle factors. The use of a self-administered computer-assisted interview provided an ideal environment for collection of sensitive information, such as use of marijuana. Perhaps as a result of the confidential setting, 66.2% of the weighted study population reported ever using marijuana. The drug use questionnaire examined marijuana use in great detail, allowing differentiation of frequency, duration, and recency of marijuana use. Also, information on testosterone levels was determined using a standardized central assay with rigorous quality control measures (Botelho et al., 2013).

A limitation of this study is the cross-sectional nature of data collection in NHANES. Although there is likely a minimal effect of response bias given the frequency at which marijuana use was reported, questions about the timing and frequency of past marijuana use may be difficult to recall. Also, forms of marijuana consumption other than smoking were not captured. Factors such as the amount of sleep the previous night (Auyeung et al., 2015) and physical activity immediately before blood draw (Hakkinen & Pakarinen, 1995; Kraemer et al., 1998) may affect testosterone levels. Adjustment for these variables could not be conducted as NHANES did not collect this information. In addition, NHANES has not measured serum concentrations of other sex steroid hormones thus it was not possible to examine whether they were associated with marijuana use.

Do you think this:

Could have to do with the user group having a higher baseline than the non-users? Higher TT is correlated to taking risks, which drug use would probably fall under. 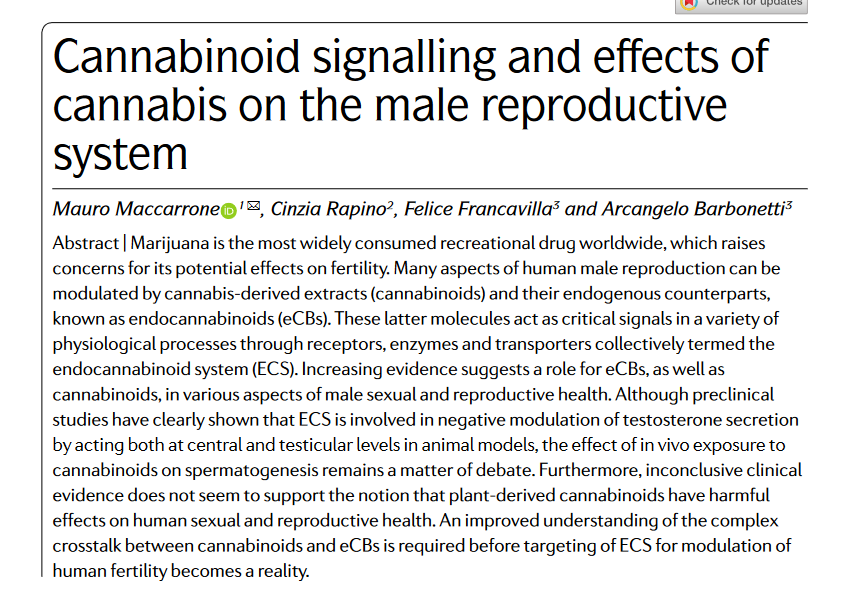 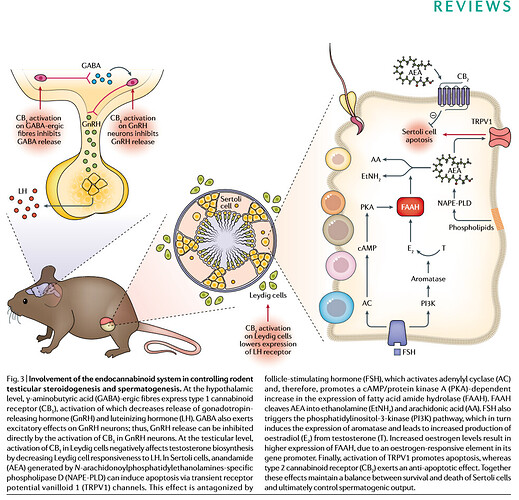 thank you for taking the time to find the snippets and diagrams that answer all the questions. i appreciate it.

Anecdotally, I feel no obvious negative hormonal effects (I have no quantitative way to assess this) while using at low dosages (usually 5-10mg) and relatively high frequency (not quite every day) over a 5ish year span.

if you don’t mind me asking, do you get high from 5-10mg ingested??

Yea, I’m not like Snoop Dogg high but it definitely takes the edge off. I use stuff from dispensaries, which makes a significant difference. I bought some stuff from a sticker store (they’re trying to sell in a grey space by giving you weed and selling you stickers) in NY recently, they were allegedly selling 500mg of gummies, 50mg per gummy, those had about an equivalent effect as the normal 5mg edible I take from a regulated dispensary.

They looked at Jamaican men that smoked at least daily

I meant to mention earlier…
When I went to my primary to discuss low T symptoms, she mentioned a few of her other younger patients and talked about why they were low T.

One admitted to abusing AAS, which caused his hypogonadism
The other was a heavy marijuana smoker, which she said caused his chronically low testosterone.

Though my primary doesn’t know too much about testosterone (what primaries ever do?), I think she’s likely right about weed induced hypogonadism. Still, hard to find studies to support this.

lol I quit kratom due to fear of kratom induced hypogonadism. didn’t know cannabis could do the same.