I want to buy three bars. One for cleans that spins (bearing?), one specialized deadlift bar, and one for squats and bench presses that will hold up for decade (1500 lb capacity as well as 1500 on the DL bar). can spend at least a $2000, maybe more if they are going to last and be worth it.

Can someone give me specifics as to which bars to buy? 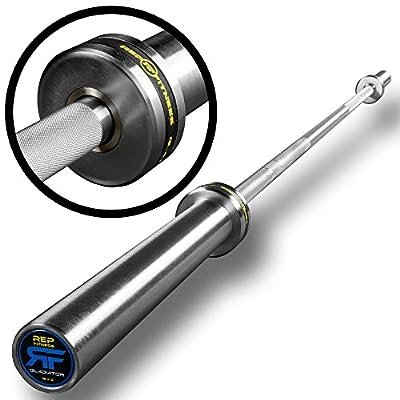 A true Olympic bar at 28mm diameter (25mm for 15 kg bar) for easy grip, and at 230k tensile strength with a 1500 lb rating, bending this bar will not be an issue. Hard chrome coating has the most rust ...


this one is 1500, and I’ve heard good things.
otherwise id check these out.

don’t take my word as gospel, but I was disappointed with my early purchase of a bar. the ones above are what I’m entertaining for my next

I’d suggest trying a few bars out and finding out what features you prefer and need. Think about how sharp of a knurling you prefer on a deadlift bar, whether you care for center knurling for cleans, and if you care for or need whip for cleans. Also, keep in mind your preferences may change with time and experience so dropping a load on your first bars may not be the best use of funds. I’m quite happy with my Rogue Ohio Power bar for squats and bench, and a very cheap 1500 rated Cap for deads because the light knurling doesn’t rip my thumbs up when using a hook grip.

Rogue oly bar, power bar and deadlift bar will be a solid investment. If you are happy to spend upwards of 2000 bucks then any reputable brand really.

So, if you are at $2000, are you at $650/ bar? You can generally get top of the line for that. I think I gave about $800 for my eleiko training bar. The competition bars are $1000, just sharper and worked for balance… certified for competition. Do you have bumper plates?

But, you don’t need the spin so much in the clean as you do in the snatch. You can pretty much clean with an old beater.

You don’t however want to clean with a specialized power bar. The stiffness in the bar makes catching the wight like Wylie coyote catching a piano from the road runner.

Give me an example of your Olympic use of the bar, and I can probably point you in the right direction.

Cleans, hang cleans, power cleans and high pulls. I use bumpers so I don’t have to lower to the ground. Main problem is my bars have developed bend over the years.

I also have small hands. It’s hard to get a good hook grip.

Main problem is my bars have developed bend over the years.

I’m going to guess that you had some shitty bars before; looks like you’re trying to remedy that by throwing some real cash at the problem.

If you’ve got $2000 to spend, you’ll be able to go near top-of-the-line for all three, although I kinda question the need for a specialized deadlift bar unless you’re a high-level powerlifter; from what I’ve read a DL bar can be quite frustrating to squat or bench with because of the extra whip, so you’re really limited to using it for deadlift-only; but hey, if you have the cash, why not?

I’ve been training at a CrossFit box for the last several months and have been able to use the Rogue Bar 2.0 and the Rogue Ohio Bar for most of my workouts there. Both seem like good general-purpose bars and have held up fine with deadlifting 500+ pounds and squatting 400+ pounds (on top of whatever other abuse they take during the CF workouts). I haven’t seen or used the Rogue Ohio Power Bar (which is different from the Ohio Bar), but from what I have read it is a little stiffer, has a little more aggressive knurling, and functions quite well for just about anything except the Olympic lifts. Honestly, I’m pretty sure you could just get a top-of-the-line Olympic bearing bar from the maker of your choice for your Oly needs, then get an Ohio Power Bar from Rogue, and you’d be all set, even without the specialized deadlift bar.

If you’re just trying to get a handle on some of the defining characteristics of barbells, I would watch Rogue’s video (features Matt Chan talking through six of Rogue’s barbells, just a nice general overview) and also Mark Rippetoe’s video on barbell basics. They provide a decent layperson’s understanding of what defines a barbell.

For the record… I have a rogue Ohio 2.0, and it might have a slight bend. My Ohio original was replaced, it bent significantly. I pretty much only squat and bench press with them. It’s a 28.5mm but man that 1/2 mm seems like a lot.

Spin will not be that big a deal. No reason to buy a Ferrari when a mustang will out run all the corsicas on the street. Put the money to other gear.

You could get an eleiko sport bar for the mid 5s. You could also get a York elite for the same money. If you want IWF spec’d bars, eleiko, uesaka, werk-San will all be the same price and everyone has their favorite. DHS & ZKC will be a bit cheaper, but I’m not sure where you get one. Rogues is supposed to get certified, I think the national events will start using them, but their “euro” bars start approaching the same prices as the IWF cert bars.

Welcome to Eleiko Shop where you can shop for the World's Most Famous Bar!

Spin will not be that big a deal. No reason to buy a Ferrari when a mustang will out run all the corsicas on the street. Put the money to other gear.

I agree for general-purpose use…I want the thing to spin fairly freely, but don’t care if it spins clean as a whistle - just as long as it doesn’t have any funky spots where it gets stuck.

Thanks for the heads-up on your prior experience with some of the Rogue bars. My wife & I are closing on our house in about 4 weeks, and I’ve got (tentative) plans for our home gym starter kit, but I’m still open to new information.

What is you clean, bench, squat and dead max or max triple? If I had two grand to spend I’d probably get an all purpose bar, MAYBE a bar to clean with (if it’s really important to you), go buy some galvanized pipe and make an axle bar, and then pocket the rest. But if you want to spend two grand on bars, that’s you I guess.

I’m not sure if you’ve looked at CT’s “Ballistic Olympic Barbell” that he sells over at Thib Army. I can’t comment on it other than it is reasonably priced.

I hear good things about the Rogue bars and have used one, however the long term track record is not there, yet.

I have a 37 y/o Eleiko bar that is as good as new. For a while, it was being dropped from overhead with over 400lbs on it about three times a week. Granted, it has been treated well, not used on a rack or spiked on some crazy miss.

You would likely do fine with a lesser bar (Uesaka, York and WerkSan are fine bars, perhaps equal to Eleiko, but different), but that one will last you forever.

So I realize that I don’t need a specialized bar for cleans at all.

The main issue is that I want a heavy duty bar that is not going to bend over the next 10 years, and that a heavy duty power bar might not be best for cleans because it is so rigid, and I want to be able to do cleans and drop the weight without possibly breaking something (I have bumper plates but I have heard that people have broken off parts of regular bars by dropping them. SO I need a long term power bar that won’t bend, and a bar that is good for clean and high pull variations.

SO I need a long term power bar that won’t bend, and a bar that is good for clean and high pull variations.

I stand by my original advice:

Of your original list, the deadlift bar is probably the least necessary.

If you can spend $2000, you might as well get one really high-end Olympic bearing bar for your clean and high pull variations, and one good-quality power bar (Ohio Power Bar from Rogue, Texas Power Bar, something like that).

Deadlift Bar - Buddy Capps Texas Deadlift Bar. $50Longer, but thinner and easy to grab with more flex. Same sharp knurling, but no center knurling, so it slides up your thighs nice. Not neccesary, but an awesome luxury. Great for PRs and really getting hype/getting mentally excited for Deadlifting. Pretty much worthless for anything else.

For Cleans- Pendlay Oly Barbell.
The cross fit types at my gym race eachother to get this bar first. Slightly thinner to grab. More flex than a power bar. Great collar spin. No center knurling so it slides up your body nicely. Good for pulls, really bad for squatting.

I’m not sure if they even still make this bar, but Rogue’s Training Bar looks like a copy.

Muscledriver went out of business - to my knowledge pendlay bars no longer exist for purchase. You could of course ask @glennpendlay

They weren’t my favorite. The lack of center knurl being the primary factor. I also caught a bar one time that didn’t flex like the bars I normally trained on… (eleiko/York) I was out for 3-4 months. I guess that’s personal though. Haha.

All Olympic bars should be 28mm for men and 25mm for women.

guys, Pendlay bars are being sold again, by me. if anyone wants to check on it my email is glennpendlay@gmail.com