I think I shall be in line Thursday to see their new Summer Menu, and to try the bacon sundea 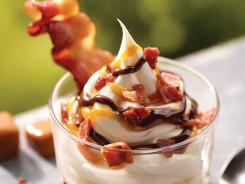 And for a sweet ending, the company is offering a bacon sundae â?? vanilla soft serve with fudge, caramel, bacon crumbles and a piece of bacon â?? that started in Nashville, Tenn. earlier this year.

The salty-sweet dessert clocks in at 510 calories, 18 grams of fat and 61 grams of sugar, and joins a kitchen-sink of other weird ice-cream combos.

The items will be available through the summer, or while supplies last.

The limited-time items are Burger King’s latest push to win back customers and reverse sliding market share, an effort that started soon after the company was taken private by the private equity firm 3G Capital in late 2010.

Earlier this year, Burger King launched its biggest-ever menu expansion, including fruit smoothies, snack wraps and new salads. The items were intended to go after a broader audience of moms and families, a shift from the chain’s previous strategy of courting young men with calorie bombs.

Core menu items, such as French fries and the Whopper, have also been tweaked as part of the effort to improve food quality.

Burger King is trying to underscore its focus on ingredients with a new tag line, “Taste Is King,” which replaces “Have It Your Way.”

A new ad has been celebrating summer barbecues to highlight the chain’s emphasis on fire-grilling burgers. The new summer items will be featured in ads starting Thursday.

Wendy’s is also revamping its menu to improve ingredients and recast itself as a higher-end burger chain. The makeovers by the hamburger giants come at a time when the traditional fast-food chains are seeing more competition from smaller players such as Five Guys Burgers and Smashburger that offer higher-quality food, and from burger alternatives such as Subway.

Burger King isn’t the only fast-food chain trying to draw attention with unusual offerings. Taco Bell earlier this year introduced its tacos with Doritos shells and a “nacho burrito” that includes corn chips.

Copyright 2012 The Associated Press. All rights reserved. This material may not be published, broadcast, rewritten or redistributed.

I had a bacon shake once and it made me gag and puke out my window.

That shit looks nasty. But hey gfy if you can handle it.

Thats right up there with a Schlitz & strawberry ice cream float.

The way it’s talked about you’d think it was invented 5 years ago.

^ Bacon is always breaking headlines because it’s so awesome…

But on a sundae? Awwww hellllllllllll no

[quote]Cuso wrote:
Thats right up there with a Schlitz & strawberry ice cream float.

Not in New York. ZING!

[quote]Cuso wrote:
Thats right up there with a Schlitz & strawberry ice cream float.

Not in New York. ZING!

Milkshakes, ice cream, coffee drinks, and pretty much anything containing milk is exempt from the stupid proposed law. Makes tons of sense, right?

THIS IS WHY THEY HATE US.

(and by they I mean our Arteries)

I tried the bacon sundae back when Dennys did it.