I have posted before on my issues so I won’t go into detail but in general can a 40 year old guy with a low t of 184-200 build any real muscle,I lift hard four-five time a weeks and the weight is coming on slow,along with the belly fat as well,I haven’t got on trt yet and am just a little apprehensive.I really think I work hard and my nutrition is spot on,I weigh 173 and eat 3200 cal,40/30/30
Am I pissing in the wind ?

For most guys, I don’t think that you would gain much. But you can improve muscle tone. When you get on TRT, you will be better prepared to make gains.

If I get on test shots will it affect my erections,I have no issues with that,my labido was kind of bad when I lost all that weight but is back and doing good,mainly fatigue,mood and lack of being able to put on muscle without all the lowers belly fat.
Also I have three kids,plan in no more,any reason for hcg or any other meds.
I have been on the fence for over a year and it’s dicourageing to see progress,just bone of it mine.

I had t in low 300’s for many years. had several state powelifting records. but it was hard. it can be done. now on T i expect to break my records from many years ago at 48

My experience is that you CAN build muscle, but I could only gain muscle if I gained twice as much fat. When I cut, all the muscle was lost.

Get your T levels fixed. Now I can basically touch iron and gain muscle. I worked far too hard for the meager gains I got when I was low T.

You have no reason to be apprehensive. Your quality of life will improve tremendously.

Yes you can build muscle. You will likely hold a higher percentage of fat than you other wise would as gonad said. You will also no gain like you would with higher t levels, but you will gain plenty especially the first 6 months. 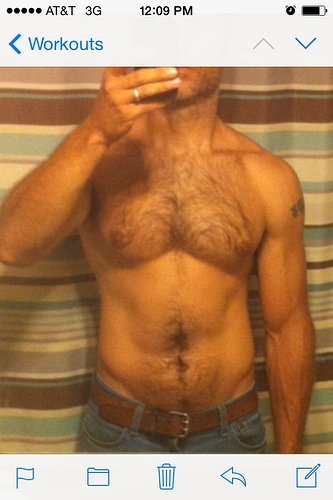 I worked far too hard for the meager gains

2 years lifting/dieting with low T… I managed to maintain my meager lean mass while cutting, and busting my ass… always struggling to recover by the time my next workout came around… running myself into the ground. Started shots 9 wks ago, and I’m already up 5lbs in quality muscle… now, I’m eternally anxious for my next date with the barbell.

My once sex starved little lady is getting worked over so frequently that she’s asking me for night’s off.

Listen to gonad… get your T fixed.

You’re already way more muscular than the average guy so yes clearly you can build muscle. You would just be making more gains with proper T.

For low T, you are kicking ass.

We are about at the same weight, I think I’m some inches taller than you and we carry fat differently. I could have never reached your level on low T, I assume you kept some of it before and/or low T is a recent development for you.

You will still do far better when your levels are fixed.

I’m 54 and still putting on muscle since starting TRT. I lift pretty hard, but only 3 days per week. TRT has allowed me to go harder and heavier in the gym. I haven’t looked this good in a t shirt in 25 years!

You are doing good with low T. My levels are higher but enough to give every symptom associated with it. I found it extremely hard to retain muscle and hard to gain it as well but to a lesser extent. When i tried to lose fat, i lost muscle and looked like a twig. When i tried to gain, i gain too much fat, not enough to make me look fat in a T shirt but lose all definition. My fat patterns are also consitent with low T and i hardly lose any fat from abdominals and buttocks. I have been lifting 5 years but have only seen my abs for a period of 2-3 weeks.

I have been fighting this for years,I think by watching people I work hard and don’t miss many,if any workouts,I struggle thru them a lot though.I watch my food intake(weigh food etc)and watch macros and have it now at 3150 cal,40/30/30.Its not much work now that I’ve done it so long.I seem to be tired a lot and can’t sleep very well,maybe 6 hrs a night at best.I have checked my temp for thyroid issues but don’t think the junk digital thermostats are right,I orderd a old mercury thermostat so I can get that figured out,I’m supposed to go back to gp doctor for some blood work in the next week.I called all the pharmacys around my area and none have hcg,including compounding pharmacys.
I would like to put on about 10-15 qulity pounds in the next 18 months or so.

10-15 quality pounds is a lot for a guy your age. Not impossible, but a lot especially in 18 months. Even young guys need to bulk up about 35 lbs then cut to add 15 lbs of muscle. I’m not willing to eat that much. I’ve probably added 5 lbs of muscle and loss 5 lbs of fat and it’s a huge change in the way I look. Of course, I’m much older than you. Keep us updated on your progress.

You could do that with TRT, but it’s aggressive. Shoot for 1lb a month and that’s not ridiculous. However, you may not get there since you are starting from an already trained physique. Beginners would have more luck since their bodies make big gains the first months. T or not, you are plateaued and TRT will help break that but I don’t know to that degree.

Went to doctor and had some blood work redone,he’s on vacation so I’m going back to see what see we can check for the fatigue,his nurse authorized a test and glucose sense my dad’s diabetic,my fasted glucose was 101 on a 70-100 scale and test was 349 on a 241-841 scale.
I know it’s still low but I’m really excited about it being up,6 months ago it was 185 and 1 year ago it was 195.
I don’t know if it’s the strict nutrition or workout consistency but I’m hoping to keep moving up,I was really struggling about the decision and to check all things before committing to trt,I still might have to but it’s looking better. 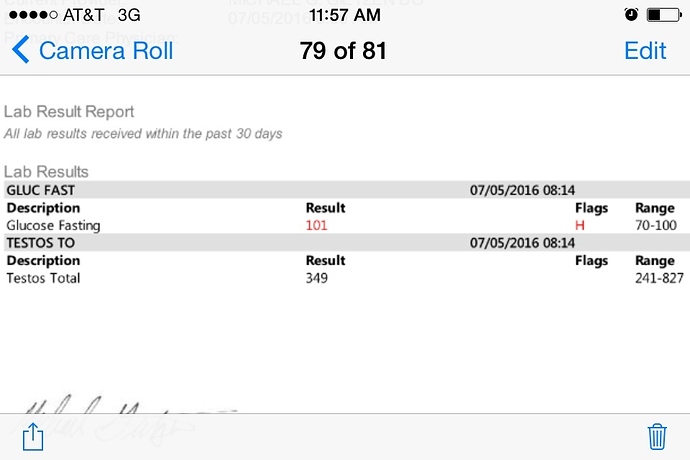 Congrats on the test bump.

Keep an eye on the glucose! I know it’s close, but you do want to try and lower it. Losing weight is the best way to do that. Not saying you’re fat, but it is the most efficient regardless of how lean you are.

Mostly all carbs are whole grain oats,s potatos,lentals,blueberries and raisins in oatmeal,a few bananas a week,the rest is green veggies or carbs from cottage cheese.
I do need to start doing some hiit cardio to lose some belly fat,I will check into fasting.
I’m about 40%carbs at 320 grams,do you think lowering it to 30% at 240 would hurt muscle building capability ,I deffently want to keep it in check,my dad has really had a though time,he had it about 20 years now.

Glucose and cholesterol require AM testing after fasting all night. Water only until labs are done.

When I see young guys getting good results in the gym when T and/or thyroid function is low, I become concerned that the stress of this may lead to adrenal fatigue. Over training is relative to your abilities and limitations. Some young guys just drive on with sheer will power.

I can but I am younger than you.