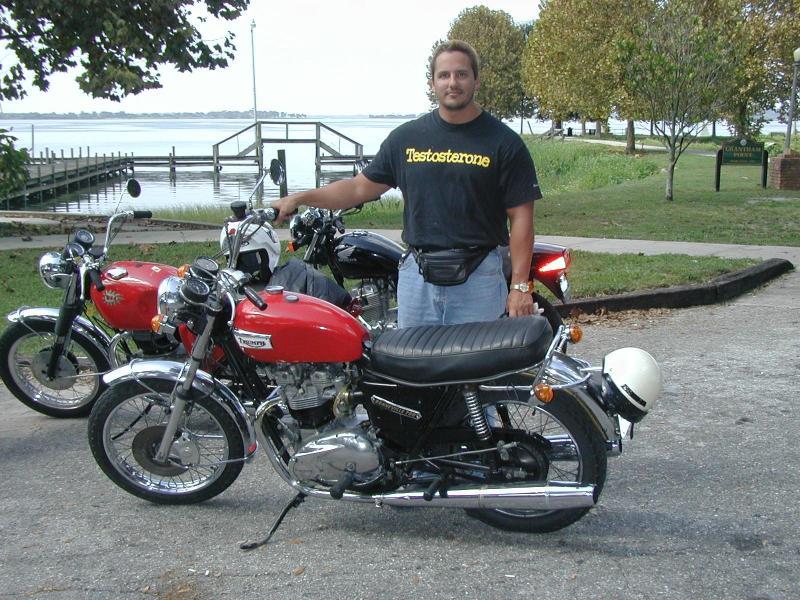 Just wanted to post a picture of myself and my beloved Bonnie. This was a British Motorbike event in Florida as you can see I wore my colors proudly. 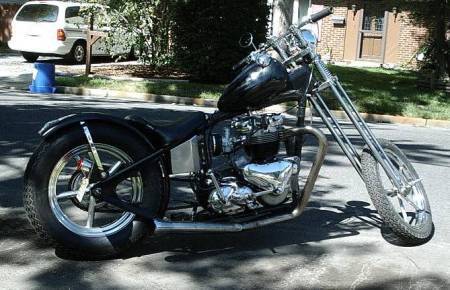 hope your not one of those guys that gets pissed off at us chopper guys,but anyway here is my '57 Pre-unit Triumph…by the way you are jacked!

Nice bike. I used to work at the ad agency that advertised for Triumph. Triumph riders were such a niche group in the US, I rarely saw the bikes on the street. Low and behold a t-magger rides one. Cool.

Hey!! A few T-maggers ride Triumphs!!Anyway I forgot to say i like your bike Ali,what year?Is this your first and only Triumph?Me,and a friend built this chopper and we are now working on building a second for him…

I just have to point out that a fanny pack makes even a Testosterone shirt look dorky. Thanks for that.

He could have a loaded Glock in there, ready to put a burning slug into your writhing torso…

I know a guy who uses his fanny pack as a convenient, easy-to-get-to holster for his revolver.

Are you sh*tting me? “Hold on for a second, while I carefully unzip my fanny pack and whip this thing out…”

There is no way that’s a convenient holster. But yeah, I imagine if you habitually wear a fanny pack, you’d probably better be packin’.

Not that there’s anything wrong with that.

The gun of course doesnt hide under a zipped panel, instead it fits nicely into a fold panel space. the trick is to form the pack correctly so the gun fits well and is quick to draw yet doesnt look like a gun in a bag. Thus they use good leathers/form and conceal it with a covering fabric if needed.

Pricey things though, but obviously there is a market for them…

Queer eye for the gun-toting guy, I guess.

aeliop: Sweet ride brother, what year is the bonnie and where ya from?

I appreciate all the kind words.I live in Orlando, Florida and the bike is a 74. I have since repainted the tank (a little darker red) As far as Choppers go, I love them. As a matter of fact I too have been planning a chopper build. I would appreciate any and all imput. Your right about the fanny pack it’s gone I carry my gun in my left boot now.

Dave that is a great looking chopper. Looking forward to talking to you about it.

Hey,Aeliop thanks for the compliments,any questions you may have ask away, i know every nut and bolt of this bike,have rebuilt,the motor and gear box for example not to mention totally building the bike…looking forward to chatting choppers/triumphs with a fellow iron freak…BTW i have a powder coating set up and will be making some custom parts to sell,so if you have any suggestions let me know,i will have to snap a pic of my new side mount licence plate/tail light set-up its really cool i cut a circular saw blade in quarters and welded in a piece for a gusset,real evil looking…