So i am moving in a couple of weeks down to new orleans, i am hoping to find a good mma gym and what not to train and stuff, i have just gotten into boxing and i have a background of wrestling so i fugure im good for the go.

About a couple of days ago i got my first punching bag, 100lb heavy bag. I went for about 20min…10min for punches, and 10min for kicks, let me tell you my endurance, strength, speed on all of those sucked ass

i tryed to see if i could still stretch my legs out and try to do a split or something, i didnt even come close. Last night i ran for about 3 miles…i had to stop about 5 times to catch my breath and walk off a stabbing pain in my left gut area.

Anyway i was wondering if any of you have a good program that i can use to increase both strength,speed,endurence for mma

this is basically what i came up with for a good routine for a while, unless you guys have something better or anything…this was just stuff that came to mind for building a program.

how long are your mma fights?

i did this until my coach pulled me aside and told me to train smart, to train for my sport.

so instead of training for two hours and running 20plus km a week. i have to train explosive and intensively.

you will get into bad habits by training for long periods when you are tired.

intense skipping is super for conditiong. sets of sprints are great too.

try filling a few rounds with quality speed and strength punches and kicks.

remember fighting is anerobic. so train that way.

check out rossboxing.com he has some really good free tips.

Hmm. Personally I don’t much like running for conditioning. Then again, I suck at running so who knows.

I prefer strength-endurance activities such as calisthenic circuits with striking, or short sprints interspersed with bodyweight exercises for endurance.

Do that as many times as you can stand, say 3.

Then, on the heavy bag:

Do 3 sets of that and you should be pretty tired.

Ditto to much of what has been said here. Running 3 miles 5 days a week isn’t going to help A TON with just a couple 3 or 5 minute rounds, but there isn’t a professional boxer or mixed martial artist I’ve ever heard of who didn’t jog too.

You need a good mix of running, sprinting, and anerobic excercise.

In the past I haven’t focused on sprinting enough. When things were standing up and I was going with the bigger guys I was able to keep my wind, but when I’ve gone with the smaller guys who are moving alot more, or guys trying to take it to the ground I’d start wheezin’.

Work on it all.

You know, I always hear that shorter intervals are better for fighters, etc.

But every great boxer I’ve ever heard of has run miles upon miles everyday.

I read in Mens Health that Mayweather watches however long the other guy runs, then runs two miles more.

“Typical of Mayweather?s training you will see him loosen up for a good 15 minutes and begin his sparring session. He will spar for a good 40 minutes at minimum and if that?s not enough, he then begins with his work out routine which consist of bag work, mitts and exercises. All non-stop? Never Tire!” 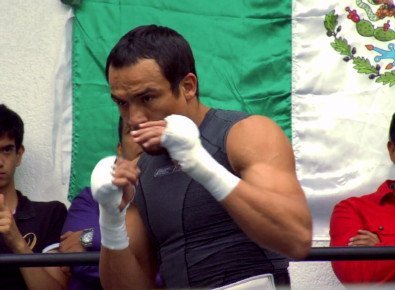 Marquez: I can’t wait to get Pacquiao in the ring to beat him again

By Bill Phanco: Juan Manuel Marquez is really looking forward to getting Manny Pacquiao back in the ring tonight to beat him for a fourth time, although

Marciano liked to run up a hill near his home while training. He?d charge up it at full speed, then run backwards back to the bottom. Then he?d charge up again. Rocky did this over and over to build up his leg muscles and his stamina.

Something else Marciano did to build up his stamina and punching power was to get in a swimming pool to shoulder depth and throw hundreds of punches underwater.

He does it (runs) every morning even if he doesn?t have a fight?five or six miles. Been doing it for six years, every day. Even does six or seven miles on Christmas morning." Charlie Piccento, Rocky’s uncle, to a reporter for Fight Magazine 1953, just before Walcott II.
“You throw a lot of punches, kid. Maybe you?ll have to pace yourself. You could get plenty tired in a ten rounder.” Charlie Goldman to Rocky when he was training for his fight with Johnny Pretzie.

“Don?t worry about that,” Rocky told him. “I?m in better condition than any of them. I can go as many rounds as I have to.”
Rocky spent hours punching the special heavy bag he’d had made for him. It weighed 300 pounds, much heavier than a normal heavy bag, and he had to hit it even harder to move it around. He wanted to be able to move 200+ pound heavyweights around with his body punches.

Ben Bentley, Rocky’s press agent and friend, told me Rocky would normally run at least 5-6 miles a day year round, but when a fight was signed he’d increase the distance to 9-10 miles, and usually the last week up it to 12-15 miles. On top of this, he liked to walk another 5-10 miles in the late afternoon or evening. And he did all this in the hilly country around Grossinger’s, where he trained.

I know everyone scoffs at these guys training regimes, but… maybe they know a little something about it? I wouldn’t knock roadwork… and as much as I love Ross Enamait’s stuff… he ain’t Marciano, and sure as shit ain’t Mayweather.

i agree w/ the short intense bouts of cardio…

Irish ~ i agree that all boxers will run miles to get their endurance up, but you must remember that boxing can be 12x3 minute rounds…unlike mma which for amatuers are usually 3x3 minute rounds…

big difference in terms of duration…the OP said he’d like to get into mma so i believe short intense cardio is best…but if you are going the boxing route deff. some longer distance is in order

Based off your post, it sounds like you’ve got a ways to go before you reach your ideal shape and endurance perameters. With this being the case, I don’t see a problem with you running 3 miles a few times a week, and then doing some shorter, interval style methods a couple of days a week.

Then, once you feel like your endurance is improving, I’d start to tailor it more towards MMA-specific stuff.

Whatever you feel like doing, do it. Plus, if you do sign up for classes, those will also greatly improve your conditioning as well.

Marciano liked to run up a hill near his home while training. He?d charge up it at full speed, then run backwards back to the bottom. Then he?d charge up again. Rocky did this over and over to build up his leg muscles and his stamina.

This is awesome advice. We do this during Fighter’s Training a lot. The hill of death. We do a minimum of 10 sprints up while jogging down, and on each subsequent one, whoever finishes first gets to be done. He goes back to the gym to do bagwork while the rest finish in this fashion. It’s very competitive.

We also do a lot of stair sprinting. We go to a parking garage and then sprint up the stairs to the top, then jog back down the ramp. Hell on the calves.

A typical fighter’s training (just for the fighters, we have regular skill training as well) for us will involve cardio like above, then back in the gym for calisthenics, then finishing out with 30-45 minutes of grappling, or sparring.

running is important… i still run one 10k a week… but that is on the side, it doesnt make up for my training…

i used to run 5k before training train for two hours, four days a week. i thought that the endurance i was conditioning for my body would help…

from experience i can say that i am a better fighter when i train intensely for an hour rather than for 2 1/2 hours.

running is good for keeping your body lean and it will help you get down to weight by getting a really good sweat.

just remember to train for your sport…

a fighter NEEDS to be good on their feet, hence all the road work…

i really think people should pay more attention to skipping. it can be as intense or as endurance style as you like… a good skipping session will make a diff cause it works your arms just as much…

alot of boxers also swim as an alternative to running.

Chad Waterbury wrote a couple of articles related to MMA called Hammer Down Strength and Hammer Down Endurance. I don’t know if this would help you, but here are the links anyways.

[quote]FightinIrish26 wrote:
You know, I always hear that shorter intervals are better for fighters, etc.

But every great boxer I’ve ever heard of has run miles upon miles everyday. [/quote]

And Tito Ortiz and Fedor Emelianenko, two fighters widely regarded for their conditioning, both do long runs.

The “intervals only, bro!” argument gets old. There is some theory behind it. Sure. But too many people have gotten real-world results using old school training methods - like taking longer runs. But, hey, what does Emelianenko know? I’d much rather listen to some guru than the greatest mixed martial artist of all time.

True. Long runs work well for a lot of fighters. You should try some different things, and see what works for you.

because im trying to make weight, im finding that running is helpingme get leaner, so i do that in the mornings and train at night. plenty of rest time in between.