Well, maybe not. But they were Samoan and at least one member could bench over 500. I saw the clip and interview on Mtv a few years back. to me they had a little more street cred than skinny ass corporate wanna bees that probably got a start from daddy.

Samoans are tough and are almost ninjas. Amazon.com has their stuff fro sale FYI.

One time I saw a Samoan flip out and fly throught the air. He was really moving and when he landed, he pulled out a red guitar and wailed away for like an hour. Then he pulled off his Samoan mumu and underneath was a Ninja outfit.

Good thing Ninjas and Samoans are cool with each other, or else they would get SUPER pissed and have a fight. This would blow, because then the pirates would take over.

Samoans also wrestle, when they aren’t being ninjas and flippin out and stuff.

Don’t know what the fuck Demo Dick is talking about?
Go to www.realultimatepower.net and maddox.xmission.com.
Those are some fucking great sites.

While you are at it check out maddox.xmission.com/commujism
Prepare to be aroused.

strong they might be, but great rappers they definitley are not.

Deep thought that was, P-Dog.

All your base are belong to us 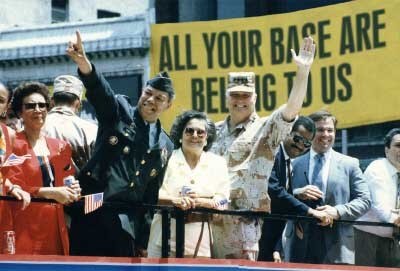 Good reference for All Your Base stuff:

Read the Eminem signed them to his label recently.

Seriously, now i’m happy or confused or whatever. I never liked rap much before. I always was annoyed by the I’m a skinny little bastard tough guy phenomenom. I thought the tribe was pretty hilarious after seeing the one big guy go to town.

I once saw a samoan at a E.U.high school party, in the middle of being busted pick up 2 full kegs and run through a wood fence.lol

They’re like that usually great offensive lineman with bad attitudes. And they save beer!

and maybe Eminem will teach them fat bastards how to rap…