I have been gettin progressively strong for pretty much the whole year, things have been going well. But lately I have been getting this pain in my bones. Its in my ulna, roughly in the middle, it hurts especially when I do curls. Does anyone know why my bone would hurt?? I was thinking of training lighter, focusing more on form and higher reps, what are peoples thoughts?

I too used to get a pain in my elbow, only I don’t curl and I actually got it from poor shoulder flexibility and thus bar position when doing squats.
It’s been described as ‘‘a horrible headace like pain in the elbow that the trainee often thinks occured doing curls’’.

Do you squat and is it a problem then…?

That’s weird recently i’ve been getting all sorts of joint pains which come and go in one of my elbow joints and now I’m getting pain in my hips I expect from poor flexibility and restricting my squats. I also have a pain in the middle of the inside of my fore arm on the bone which gives me considerable pain especially when curling and restricting heavy use of my arm.

no its not a problem in squats, it is in bench to some degree. but in curls its the worst… its not the joint its just halfway down my bone, i have no idea why it would hurt there… sounds a bit like the1andonlys problem too… i cant curl heavy otherwise it get unbearable

I had very similar pains when curling. Not the joints but the bone. My friend suggested I take more calcium. He was right. The pain never came back.

Lots of people here complain about exactly the same thing. There’ve been several thread on that. One of them in T-Cell if I remember well. The problem is, nobody really gave any solution.

I don’t think it originates from the bone. I thougth it was the case, but it’s probably soft tissue thing. The best solution is to not do any further damage. Just change the exercises. My only problem was with BB curls. So I go with DB and it’s fine. Just experiment and stick to exes that are fine. 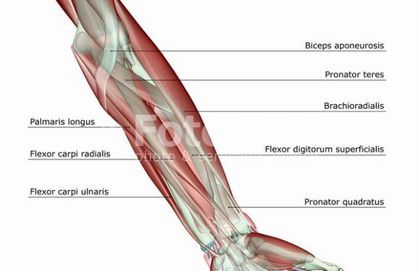 Maybe its muscular? i.e. from one of the deep forearm muscles, or their attachment?

I have the EXACT same issue right now btw, I’ll try some extra calcium as it’s worth a try, but yes, right now I’m just avoiding curls. It seems worse when I do straight bar curls vs. and doesn’t bother at all for DB curls, so that might help some anatomy person diagnose it.

I’m on starting strength so I’m just ignoring them mostly for now.

For me, it was exactly in the point where the black arrow Flexor carpi ulnaris touches the forearm. I even did some research on this small muscle on other sites. And again - many people have the pain right there, but no solution given. I wonder if calcium really works here…