BlueCollar: How Do You Tr8n?

Interested to hear how your training and nutrition have developed over the last 25 years towards becoming Bigger, Stronger and Leaner.

[quote]yolo84 wrote:
Interested to hear how your training and nutrition have developed over the last 25 years towards becoming Bigger, Stronger and Leaner. [/quote]

I’d be curious as well. One of our more experienced members, who’s been a powerlifter, bodybuilder, and all around decent guy, even when he disagrees with you

bluecollar ranks up there with bwhitwell! both awesome posters

When I saw this thread today the first thing I thought about was all the great lifters, workout partners, and friends that have helped me along over the years. It has been a blast and I owe them all a debt of gratitude.

I started training in the spring of 1987 @ 23-1/2 years old. Although there were differences between bodybuilders and powerlifters where contest preparation was concerned, much of the routine training was similar. We often trained together, and I learned a great deal about training and diet during this period. Starting at 160 it became painfully obvious that I wouldn’t have the opportunity to compete as a bodybuilder for many years, if ever. (there were fewer contests to begin with and no tested organizations at all) The problem as I saw it was ‘how does a lifter stay goal directed when the long term goal was many years away’ I knew several bodybuilders that used powerlifting competitions during their ‘offseason’ periods to maintain tangible training goals. I was introduced to ‘periodization’ training and have used it in some form to guide me ever since. I alternated 18-30 month periods were I carried 10-15% over my known lean weight and would usually compete in two or three meets, with 5-14 month periods were I would lean out over the course of several months and spend the summer in ‘beach ready’ condition. There were a couple of occasions when I ran the lean period through the winter and following summer but that was rare. While participating in powerlifting I included more volume and isolation movements than conventional PLs did and during lean periods I often worked a lower rep range than other BBs did. I did manage two small time bodybuilding shows in the early 90s; there were only two weight classes (over and under 175) and I was the only guy over 175 with any wheels. I also road in 50 mile bike rallies, ran an occasional 5k or obstacle race, and other odd events during my lean periods. I build my programs like this…

Warm-Up: I do; and have always done a minimum of 20 minutes on an elliptical, stairmaster, or glider prior to training. I never do more than 30. During surplus periods I substitute a 10-12 minute mile on the treadmill at least once ever other week, during restricted periods I do it weekly. I usually leave a puddle under the station. I follow that with 8-12 minutes of dynamic stretches.
Explosive: In every routine I either jump, do modest power-cleans, or both. I used to do a variety of jumps but I mostly do just do box jumps now.
Training: I’ve never met a split I didn’t like, but Chest & Tricep, Back & Bicep, Leg, and Shoulder is probably my favorite. Over the course of the last decade I have also received good results with Shoulder & Vertical Back, & Bicep, Leg, Chest & Horizontal Back, & Tricep. I have never trained less than four days a week and five is my norm. My weight training usually lasts 90 minutes and I have some Leg days that are two hours. The main movements are usually trained in the 4-6 rep range and I frequently take sets to failure. Secondary or assistance movements are usually trained in the 8-20 range, but I occasionally go well beyond 20. I sprinkle drop sets, peak contraction, super-sets, complexes, rest-pause, window makers, etc. throughout the routines. I usually do a few sets of abs a couple of times of week during surplus, more so when lean. Calves are done on leg day and at least one other day per week.
Conditioning: I like it all…sprints, bell swings, sledge hammer, loaded carries, bag flips, medicine ball work, etc. More while lean or working toward that ends.

I haven’t competed as powerlifter since 2006 so I don’t work the extreme top end much anymore or deadlift from the ground very often. Since I turned 45 I limit my weight gain to 10% over my lean weight. Otherwise I approach each session like it’s the most important one I am ever going to have.

Man it’s really encouraging to hear you didn’t even get started until 23. I’m constantly regretting not discovering powerlifting sooner.

Same here. I didnt get started in PL until about 2 years ago. Before that, my workouts were a joke.

Awesome stuff BlueCollar. Thank you for the info. 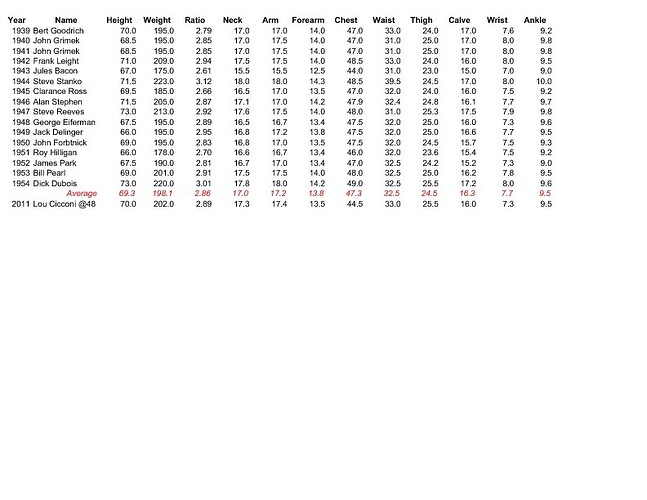 I intended to include this with the post about physique and symmetry goals.

If you are ever in Houston would love to sit over a plate of brisket and bullshit with you.

If you are ever in Houston would love to sit over a plate of brisket and bullshit with you. [/quote]

I don’t get out of the office much, but we have shipped ‘bookoo’ materials to Freeport and Port Arthur recently…it could happen.

He was the first person I read that could explain various approaches to dieting and the advantages / disadvantages of each, without sounding like he was selling something. It was a big turning point for me.