Biggest Lie You've Ever Told Someone?

Lol, hey man, I just figured he self-identified as a cat. Who am I to judge?

When my depression was at its worst and someone asked me how I feel, I always answered “like I always do” without ever stating what that means.
The interesting part is that no one ever asked/ asks what I mean by that or how I always feel.

Rarely do people want a real answer to that question.

True.
What baffles me still is that you can walk around with a crippling mental illness (up until you die from it) without people close to you recognizing it.
I have sadly seen this happen often.

My friends and family one day confronted me, concerned about my mental health. They said it took them a while to speak up because they were worried about intruding or seeming nosey - that it’s hard to break that barrier when someone seems distant, stand offish and can throw biting remarks at you.

I called them a bunch of Mary’s and they should try understand the difference betweem a crankly asshole and mental health issues.

One time I made up a story that I was confronted over a mental heath issue because it made for a funny story… or at least a story.

The absolute worst is when someone actually gives you a real answer.

“Oh well, y’know, I’ve been struggling a bit lately. Haven’t been sleeping well and me and the mrs have been fighting a little bit…”

I mean jesus christ, spare me your tedious life story. I’ve got my own problems, thanks. Don’t think that just because I’m polite enough to exchange pleasantries with you that I actually give a shit.

A: " I’m living like a King!" -dude’s last name was King. Won’t work for everybody, but it’s still Incredible!

I assume Scotland has the same system as down south wherein the only acceptable answer to “alright?” is “alright?” and then everyone just gets on with their lives?

I think its my cat’s favorite thing in the world.

But then again he often falls asleep/ passes out like this, so not even sure he’s a real cat. 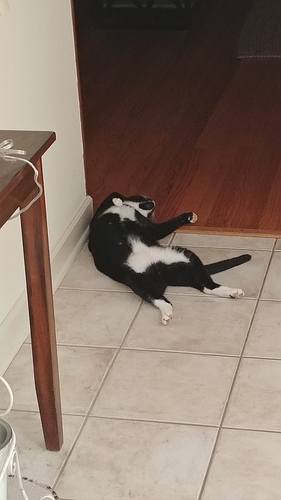 But then again he often falls asleep/ passes out like this, so not even sure he’s a real cat.

My boy cat likes semi suffocating hugs. My girl cat couldn’t care less if you just died right in the middle of the room.

Lol all my boys are at least fine with being picked up. The girl will struggle and start complaining until you put her down. If another cat so much as touches her there’s going to be a screaming match for the next 15 minutes. She’s a tortie so I dunno, maybe there’s some truth to “tortitude”.

My female is too, I second that. The male looks like a finely striped tiger lol. Something about boy cats they’re just way more effectionate.

“I don’t know what happened to the lampshade”

Bit of backstory- I had 2 friends over, and we were dicking around. One of them says -" I bet I can flip you over my shoulder, can I try?" (guy has 20 lbs on me, plays football) I say sure, but tell him to flip me onto the bed. (I don’t exactly trust him to stop my fall). There isn’t much space between the bed and the ceiling (~5’10"). A light hangs much lower then the ceiling. He flips me over his shoulder. My right foot hits something, I hear a pop then I land on the bed. I get up, look around and see glass everywhere. “Oh shit.” At which point, I start gripping my foot because I realize it’s probably cut. It is, and it takes like 15 minutes to stop bleeding, in which my friends take the glass (what they can find, plenty of small shards in the rug), put it in their jackets, run outside and dump it in a neighbor’s garbage can. I manage to limp down to dinner and through the next few days without my parents noticing.
And henceforth, have never walked in my room barefoot

So it was a sunny Saturday afternoon in 1986, and Kung Fu theater was playing Enter The Dragon. Me and my brother are watching intently as my long time buddy Danny shows up. Danny has some weed, so we go up into my room and get baked like potatoes.

We come back down stairs to finish watching the best movie ever and my next favorite thing in the world collides violently with my other favorite things. All smoked up, I forgot that I left my BB gun loaded and sitting on the couch (I liked to shoot stuff) and my brother jokingly picks it up, aims it at the villain who was at that point kicking Bruce Lees ass, and pretends to shoot the bad guy. Unfortunately he actually did shoot the bad guy, and left a quarter sized dimple/shatter in the TV’s safety glass (this is back when a TV was a piece of furniture the size of a yugo)

Thats when the lie began. We undertook a concerted effort to block the shot TV screen any time my dad was in the room. For months we would dodge and block, casually stand in front of it, distract, redirect, what ever we had to do so that Dad didn’t see that BB gun shot in the TV.

It worked for months. Then one day the shit hit the fan. I can’t remember the exact circumstance, but the jig was up. Dad saw the TV. All of the yelling and “what the fuck?”-ing a man can do was done that day.

Till the day the old man died nine years later, me and my brother maintained that we had no idea how that happened.

Haha great stuff (sorry to hear about your dad). The tl;dr; version: Weekend at Bernie’s: Bernie’s a TV

Reminds me of this yt video…