My clavicles are extremely big and protruding as **** which really hate, they even protrude at the shoulders, no injury. Is there any exercises you recommend specifically for my case? And what are my weakpoints? I also think I have drooping shoulders which makes it all worse. Some dude said a strong lateral deltoid would pull the clavicle down but I don’t know. I have been working out for a while and Im currently weighing about 188lbs.

Good lord, your clavicle looks normal. Most people don’t know where the clavicle is.

Your weak point is the lack of mass. Just keep training and eating.

Stop it!!! You are obsessing over something that isn’t even a thang! You look fine! You are not the only person on earth with boney shoulders. We are not all made the same, Thank God. Do the face pulls, rows, and band pull aparts like Yogi told you. It takes 100’s of them, for weeks. Doing them for 3 days ain’t gonna cut it. This is the third thread you have started about this. Everybody has told what to do, but you have to put in the work before it will help. Taking pics and starting different threads is not going to help.

My clavicles are extremely big and protruding as **** which really hate, they even protrude at the shoulders

Those things over your shoulder aren’t your clavicle. People went over that in your two other threads about it.

Your bones are sticking out A) because it’s how you were built, and B) because you’re tall and skinny.

Some dude said a strong lateral deltoid would pull the clavicle down but I don’t know.

That dude’s an idiot.

Thanks for your help guys, Any big boned guy managed to cover theirs up? Do you think I have potential? I guess it’s going to be a long road…

Any big boned guy managed to cover theirs up?

Yes. Larry Scott is one example. He built muscle and “fixed” his legit pointy collarbones over time.

Do you think I have potential?

If you get your head right and focus on stuff that matters - training, nutrition, and patience - instead of worrying about stuff that doesn’t matter - like starting 3 threads in one month all about your bone structure - then for sure you have plenty of potential because you’re a young guy with a decent frame (from what we’ve seen so far).

I guess it’s going to be a long road…

You say that like it’s a bad thing. You’ve got decades of lifting ahead of you no matter what. There is no rush.

The truth is that I’ve been depressed about this and it makes me self conscious so I’ve tried to find a “solution” for quite some time. It’s like I have been scared of other people laughing etc. I shouldn’t even think like this but I guess I had/have unrealistic expectations and some grade of BDD. Thanks for your input guys.

I wouldn’t have noticed if you didn’t point it out. I found myself straining my eyes to try and find what you were talking about in the picture.

I have bony shoulders too. Because I don’t have slabs of muscle to hide it. And I’m perfectly fine with it. I’m more concerned with their strength and mobility.

They are no different to anyone else, you lack muscle that’s all. Look at mine when I started out 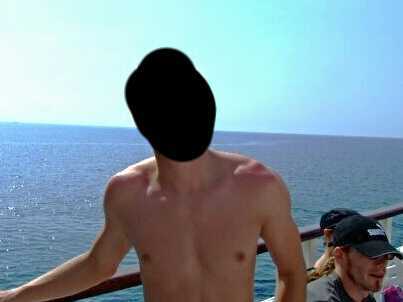 we all have them without muscle covering them! Eat and train smart.

Rather than worrying about your bones, how about you use the help available to look over your training and nutrition

what your training been like over the past year? Routines used? Current split? Exercise? Rep ranges?

what’s your diet like? What did you eat yesterday?

what’s happened to your weight over the past 6 months?

The problem is that it feels like it gets more protruding each year and the asymmetry between the two shoulders worries me. The right clavicle protrudes more at the shoulder and is more drooping right now. Also, Im at about 155-160 lbs LBM at 6’1, what LBM should I aim for?

Thanks for your support again guys.

Sorry kid, you will not get cuddles here. Just the painful truth. Most of us have been there. Either a scrawny kid or an overweight mess.

It takes time to learn to be patient. Eat to grow, get on an intelligent program and don’t sweat the small stuff.

Oh, and people are asking you questions. Answer.

200 lbs lean body mass?? I understand, I just want the truth and I am willing to work to achieve the things I want. I don’t think the bones at the shoulder ever will be covered though, sadly, what do you think?.

I have been using a 5 day split divided by muscle groups, something like this:

I stick to compound exercises with a couple isolation exercises. I use a rep range of 8-10 and often use supersets and dropsets, especially for arms. I noticed my arms grew a lot when I started working them out 2x a week so im thinking about doing the same for the rest of my upper body. Im very happy with my legs and calves actually so im looking to focus on my upper body for the coming year. I always thought my upper body was lacking but my legs were great even at the start from playing soccer, floorball, cycling and tons of running as a kid. I always drink a protein shake after workout with some creatine and dextro mixed in.

I try to eat as healthy as possible with a few cheat meals here and there. No white bread and as much wholegrain as possible. I basically only drink water and im also taking a multi, omega 3 and vitamin D. I When I bulk I try to eat somewhere around 3000-3500 calories. I usually eat around 170-190g of protein a day. A typical meal is 100g of white rice, 200g of chicken breast, some onion, zuccini, bell pepper and some coconut milk and spices.

Last bulk I felt like my weight increased but most of it was fat even though I didn’t eat insane amounts of food, It felt like my muscles didn’t grow as much, except for my arms. Its hard to tell.

At least I think I have a good frame for packing muscle, I am naturally wide and when I was about 10 my swimming coach said I had great potential for becoming a great swimmer. I think my bone structure is done growing as I turn 21 later this year and maybe my problem has been that my muscles havn’t grown as fast as my structure. My goal is the mens physique look.

I turn 21 later this year and maybe my problem has been that my muscles havn’t grown as fast as my structure. My goal is the mens physique look.

Your still in the golden age zone for good growth…so no worries.

what LBM should I aim for?

Whatever LBM you want to have.

That’s an odd question no one can answer, especially since you look normal.

If you added 5 LBM, but it was all in your legs. You would look the same.

Just keep adding weight to the bar and scale. If you don’t like what the mirror shows, fix it.

Anyone ever seen someone with similar clavicles? I also checked my genetic muscle potential and I have about 40 lbs of muscle left which sounds promising.

Aside from the very well known Mr. Larry F*cking Scott, which Chris posted about above, yes. Walk into any Abercrombie, Holister, Gap, CK, etc and look at the posters of the shirtless male modes on the wall. You can’t miss them. They all have bones around the neck and shoulder area with tightly wrapped skin.

So, now that you’ve had your genetic test, carry on with the advice everyone has given: gain size.

Sorry I missed that you answered some of the questions

you obviously haven’t written down your whole routine but just a general split. What’s your actual routine? Have you tried push pull? How are you tracking progression? Are you progressing?

Also you only half answered about nutrition, you put what everybody who lacks size says, oh I eat 3500 calories a day. Run me through a typical day, not a target day that you wish to eat, or one you occasionally. A honest average day.

I think based on what I can see, your not eating enough and your training isn’t optimal. You also seem worried about bit of fat gain. Obviously they are assumptions because you are not giving the full story.

its normally the case though, I was the exact same, I train harder than everyone, I eat 4000 calories a day, i have a high metabolism poor genetics and all that shit. It wasn’t until I was honest with myself that my training was stupid and I barely ate 2000 calories that I finally started to grow. Hard to admit your doing things wrong but worth it with results.