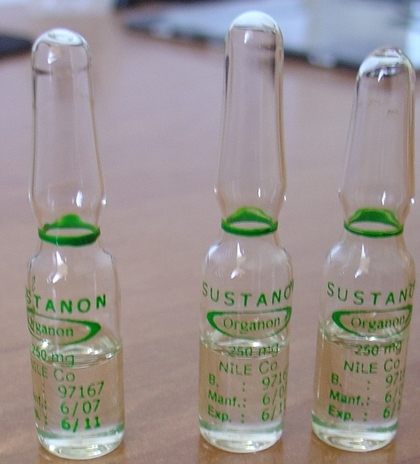 hi, thanx for all responses.

Then they are fake.

you really thing a company such as Organon wouldn’t be a little more accurate in their dosage of said substance??

Might work still though… but it just isn’t an Organon Sustanon.

Let me know where you got those so i can stay far away from.

[quote]bushidobadboy wrote:
Look at the shape of the glasswear too, it’s all over the place.

Try and snap the top off one. It should snap cleanly and easily, without the need for an amp snapper.

But as JJ says, it’s the volumes that give it away.

lol! shit… i didnt even notice that, the one on the end is all short and fat! Like the person who uses the contents of the amps most likely! haha!

obvious fakes for ones that have seen them before.
you didnt pay too much for them did you?

I paid approx 1 USD for one.

So, what is resume? fake or real?

[quote]spextator wrote:
I paid approx 1 USD for one.

So, what is resume? fake or real?[/quote]

you didnt even pay alot for them.
I would assume they are fake and throw them out

want to look for constant,shape,size,color,if its a large company like that one then they will be filled up to where they are supposed to be not under/overdosed.

feel the amps with your fingers is the writing just stuck on or is it etched in the glass.over all how is the quality of the package
that type of thing

I am glad you asked before you used them.
possiblity that they are real is still there but I would not chance it personally.

they are absolutely, categorically not organon sust. 100% not real.

Whether they actually contain test at all is a different matter… is it worth the risk? well for $1 an amp, i wouldnt risk it.

can u explain to me, how u r so sure, it is not real? because level of substance vary?

what is your argument that it is not organon sus please?

I REALLY want to know it please…

As mentioned in a few posts above… Organon is a large, professional, human grade pharmaceutical company.

When they make products they are of a certain standard, and that standard is of the highest caliber… the highest. No matter where the product is made on the planet - no matter which of the multiple (probably franchised) factories they happen to be produced in.

All production processes and design (stamps, engraving, inks, packaging manufacture, all design…) will all be of a particular standard… so if they always use stamps and not engraving then they should never be different

(I am not personally upto date with the production processes of Organon. I could look it up in one of my books but it isnt necessary here IMO.)

Now, yours are not only filled to different volumes(levels), but the amps are mis-shaped!

I know that the ONLY way these could be genuine organon is if they are factory rejects… except i highly doubt that any rejects are destined for anything other than immediate destruction.

THATS how i know.

and how you know too now!

[quote]spextator wrote:
I paid approx 1 USD for one.

So, what is resume? fake or real?[/quote]

Awfully cheap even overseas; final verdict seems to be leaning towards fake but like I said might as well try it

I recently aquired some real omnas for $4 an amp…

i really will never ever need a pharm test cheaper than that, thankyou!