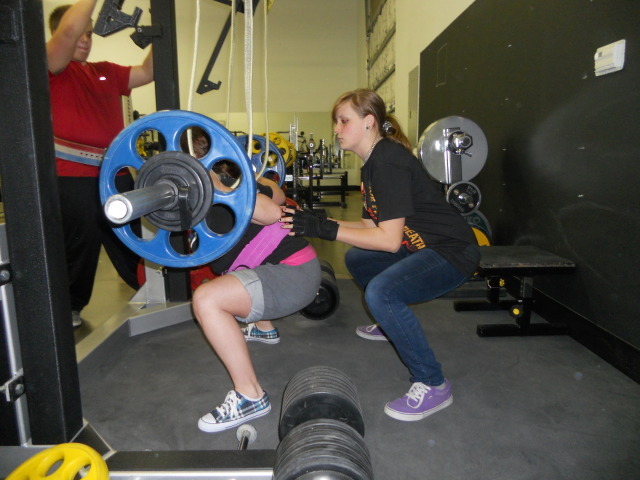 I’m a 40 year old mother of 4 awesome kids, ages 17, 16 (powerlifting), 13 (powerlifting), and 12. The oldest 2 are boys and the younger two, girls. I went through an ugly-ass divorce a little over a year ago…and let that pull me from the gym for a bit. I have been working and a full time student for at least part of the past year.

I had a planned surgery for the end of June, 2011 and due to iron deficiency anemia was told to stay out of the gym since early May, 2011. Had been out of the gym for several months recovering from major surgery, when I went to the O in Vegas in September. I have been around lifters most of my life, but had never been to a comp of any kind. Had an absolute blast.

Went to the expo, watched the pre-judging, and watched some powerlifters for the first time. Now, don’t get me wrong, I’d seen some powerlifting before, but never really watched. The suggestion was made to me to give it a shot, that I’d be good at it.

Once back home, found a powerlifting gym near my home. Met the owner, had a session with him and I have been hooked since. I now train with him and a group of competition powerlifters that train there and I love it. I am still a newb but making strides and setting goals. I also got my son(15 at the time), and my daughter(13) to start.

shooting for a comp here in my local gym (first comp for me) in early April, just to get my feet wet

that’s all I have to cover for now, but will be lurking and learning

Great that you are back in the saddle. Relationship problems throw a wrench into so many aspects of our lives. Especially great news that the kids are interested. My 16 year old daughter learned years ago that girls are not even encouraged to workout hard in PE. She was a gymnast and is now a free-weight lifter.
Girls in her school watch Pilates videos and power walk!

Good luck with the training.

Welcome - you’ve come to the right place. Lot of powerlifting ladies on here. I’m not one of them (at least, I don’t compete, although I do lift as heavy as I can) but I’m sure some of the others will be happy to give advice, if needed.

As for kids and PE, I teach PE to primary age girls. Netball is the main sport at my school but I get them doing gymnastics, football (er, soccer to you Americans) and tennis and rounders in the summer. I’m going to be starting a fit club for them after Easter (when the netball club I run ends) and will make them do circuit training. So hopefully it’ll get them interested in the fitness side of things. I mean to teach them that being strong is pretty cool.

Welcome to the fold.

Welcome Bench Wench! You’ve found a place with a fair number of 40-something women who lift heavy. Like Cal, I lift as heavy as I can but don’t compete. Good for you on setting a PL meet as your goal and being a great role model for your kids!

Right place for you Wench! Oh man I’m gonna like calling you that.

I too lift as heavy as I can but don’t compete and ultimately am sorta mostly physique inspired.

Welcome, so nice to see more women competing in PL. I started at 42 and sure wish I had done it earlier. My 25 y/o son was lifting with until his current gf came into the picture and my 14 y/o said someday she may want to do a push/pull, now if she would train consistently, lol

I did my first powerlifting meet at 43. The sport is truly addictive.

What fed is sponsoring your April meet? Or is it just a gym comp?

thanks to everyone for the welcome. I’ve worked 7 shifts in the last 3 days and am feeling a little worn down. Only one shift today, leaving in a few, then it’s group bench and chest work tonight at 5.

sorry, not gonna quote all the posts, but I am glad to be here that’s for sure

the comp in April is APF and I’m a bit nervous, and my 16 year old son will be in the meet as well

off to work, be back later

Welcome and I hope you are having fun with it! It’s good to get out of your comfort zone once in a while. Makes you feel alive!

There are quite a few of us 40-something chicks around. And you may have a similar build to Lil Power, so she can be your inspiration.

I predict that your bench is going to come along A LOT over the next few months.

followed by 15 minutes of stretching and out the door. I am damn tired tonight and very frustrated that I missed 95.

It will come. And you may have fatigued yourself more than you realize pressing the bar so many times before ramping up. Remember, that’s 45 pounds and you pressed it 30 times just warming up. I wouldn’t do that many if I were trying to PR my bench. Also, make sure you rest sufficiently between sets. I think Snap often rests like 4 minutes if she’s trying to test her 1RM. That’s a long time.

Just a point of reference, when I started logging in Feb of last year I had 90 as my 1RM to start. Now I can press 90x8. I’m similar in height to you, but with a smaller build - the T-rex arms are good for your bench press. LOL! You will progress. If you can press 90 more than once, then maybe try moving up to 95? A friend advised me to OWN it before pushing myself. I think that’s not a bad way to approach it.

Yup long rests and a quicker progression to your max. Plus, you do that when you are tired, it probably won’t happen. Try it when you feel a bit fresher.

I have been using a lot of warm up leading up to my working sets, I know. In all honesty, I know it will come. I just need to get out of the funk and move forward. I’m over the frustration about it. Today is rack pulls and back work.

Just popping in to say hi! Enjoy your rack pull and back work tonight!

[quote]Powerpuff wrote:
And you may have fatigued yourself more than you realize pressing the bar so many times before ramping up. Remember, that’s 45 pounds and you pressed it 30 times just warming up. I wouldn’t do that many if I were trying to PR my bench. Also, make sure you rest sufficiently between sets. I think Snap often rests like 4 minutes if she’s trying to test her 1RM. That’s a long time.

I actually rest longer than that if I’m testing 1 RM. Like 5-6 minutes between singles. That is a tremendous amount of warmup in terms of reps if your goal was a 1 RM test.

Hi everyone! Thanks for the welcome and the support around here.

I am working on a little reconfiguration today. I am adjusting warm up and working sets to accommodate the load I want to lift without tiring early.

This afternoon is Tri’s and Bi’s and tomorrow is heavy squat with all the guys. I love squat day

Today is shopping for new workout pants and bra.