That’s my first post so hello everybody. I’ve been training for a year. Dips are my favorite for triceps, homever I haven’t done CGBP cuz I had only dumbbells and I’m training at home. Only something similar, instead of barbell I pushed decent size plates that laid on each other with a close grip.

So this never worked for me. I got a barbell recently. I hope that CGBARBELLP will work. But still I love dips and I have 5 days till next arm workout. I used to do dips with a dumbbell between my thighs and abs. Knee’s been like 90 degrees or so. But the pressure on the thighs was so big that I developed a side-thigh-skin nerve damage.

That electric shock feeling in the nerve still kept occurring. Until I felt it even during squats and skin numbness showed up. So that was a signal to stop doing dips this way. But that’s another story. But I still had to do dips, so I last time I did it other way. Instead of dumbbell I put few plates that laid on each other. So the pressure was much smaller, cuz the surface that pressed thighs was larger.

But in this way, I could not lock it between thighs and abs, cuz it would slip down and smash my penis. So I did it with legs 180 degrees. And I even increased the weight. I’ve never smashed triceps so bad. The pressure on arms was awesome. But unfortunately so the pressure on the knees. I put 50kg on my legs + I had to temporary hold it with one leg, before putting another. It’s hard for me to describe. It felt like knees were going to rip off.

So shorter: I can’t do dips with high-diameter dumbbell between legs and abs with legs 90 degrees and I can’t do it with plates on with legs straight 180 degrees.
Anyone have an idea how to reduce the pressure on the knees? This is so good exercise and I can’t do that because of injuries risk. How do you do dips for triceps?

Ok First of all if you submit a post about smashing your penis most of us just think your a ratard. I will look past this since it’s your first post. I do bench dips with plates all the time. I use 45 lb plates and did them yesterday in fact. I assume you are talking about to benches parallel to one another and are using plates with a decent circumference. If you start with the plates above said “penis” or on your lap up against your pelvis and on your thighs with the right knee foot positioning you shouldnt have much if any movement with the plates. Honestly you may need to do some youtube searching or something if you cant figure this out. Im thinking you may need a physics lesson or two as well. I keep my knees bent slightly enough to negate the knee pain and extended enough to remove the problem with the weights sliding. I used 4 45lb plates yesterday. The only problem is that as you get more plates you have to start stacking them at an angle away from the body so they dont prevent you from getting decent depth. They start to hit your chest when you get more than a couple.

Ok. Sorry I didn’t know how to write it better. English isn’t my primary language.

do this exercise last so you need the least weight? or find something thats doesnt SMASH YOU PENIS

The point is I need to go as heavy as possible in this exercise. I’ll take the risk and try to do it without ripping knees and smashing penis lol. C’mon what’s wrong with this sentence. How have I had to write this without retardness. If I’ll still feel knee discomfort I’ll give CGBP a try.

You primarily want to avoid injury, for longevity. Do you get someone else to pass you the plates? That could help. Keep your knee slightly bent/quad flexed otherwise you will injure your knee. Maybe put a rolled-up towel near your pelvis as a buffer if you are moving in such a way that causes the plates to slide aboout?

I put the weight on a towel. I had quads flexed. But the problem is it’s a lil hard to prepare this exercise. I had to pull the weight on my quads while keeping the towel and sit. Then one leg goes to the bench (in this case a chair) and second stabilizes. While putting the second leg all the pressure goes to the first put leg and even with quad flexed it’s still a lot for my knee. And unfortunately I don’t have anybody to hand me the weight. I’m training at home. I hope CGBP will be as good. But about the dips I guess I will have to still try figure it myself. 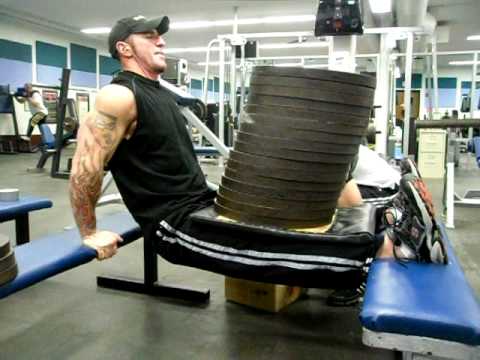 I was just waiting for him to dislocated his knees haha.

“I used to be a Bodybuilder. But then I smashed my Penis.”

I’ve seen this. I wondered why the hell my knees hurt, while he did this shitload with legs straight. I managed to do them with knees a lot more flexed. But I gotta try to do this with legs straight, while keeping the pressure of the knees. Because this way leverage is greater and I feel like my arms, wrists are bout to smash. And much greater force goes against triceps.