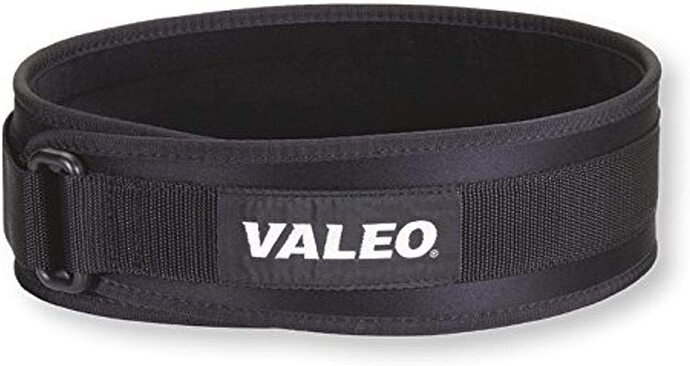 Valeo was founded in 1988 and has been delivering exceptional product solutions for over 30 years with a dedication to keeping users safe and comfortable at the foundation of a consistently evolving product collection. Valeo’s full line of workplace,...

but have no idea if its good or if I should just get a different one. Any suggestions are appreciated.

the lever or prong 10mm are both good. There are other belt makers out there but i’ve only bought from inzer so I won’t mention the others.

I really like the Inzer Lever. I run 13mm, but 10mm will work as well. They are also guaranteed “forever” and if something goes wrong they reportedly just send you a new belt. Some prefer the prong, but I think the lever works really well.

How does one figure out if they should get the 10mm or 13mm, it it based on measurements or just preference?

For what it’s worth, I wouldn’t recommend double prongs, I have a double prong 13mm(elitefts) and wish I had gone single prong or lever 10mm. The 13 is wicked stiff even after breaking it in.

[quote]dreadlocks1221 wrote:
How does one figure out if they should get the 10mm or 13mm, it it based on measurements or just preference? [/quote]

I think just preference. 13 is obviously stiffer but the 10 mm breaks in a little faster. I too went with the inzer lever belt 10mm. I have had no problems with it. and 10mm feels plenty stiff.

Im also a fan of the lever, you can crank the belt pretty tight and more impotantly you can loosen it quickly.

13mm are stiffer. if you compete some feds, i think, dont allow that thickness.

i have a 2 prong belt, i will never by another as its a bitch to get on and off. a single prong wouldnt be that bad IMO.

i also have a spud belt which i will use if i just need a bit more support but its not critical like overhead pressing. i use my lever belt for squats, deadlifts, farmers and other heavy stuff. i will use it in competition for the first time next weekend. it took some getting used to but i prefer it now over any belt if i were only to choose one.

[quote]dreadlocks1221 wrote:
How does one figure out if they should get the 10mm or 13mm, it it based on measurements or just preference? [/quote]

In the words of Dave Tate

I use a lever. Lever is great if you use just one setting on your belt. If you like to use a different setting for different exercises, a prong is better. A lever is time consuming to adjust.

To clarify, a lever takes less time to get on and off once its set, but more time to adjust if you like to rachet it down differently for different lifts or if you want to share your belt with someone of a different girth. Then you have to remove two screws, which takes between 30 seconds and 2 minutes depending on how skilled you are with a screw driver. “More time” but really not a big deal at all, IMO.

Ok well I think I will definitely get an inzer, is there a good reason to go with a PR belt over the other forever belts on that page? What about those tapered belts?

I have a Cardillo belt that I like quite a lot. INZER is obviously fantastic as well. I would say 13mm and NO TAPER. Belt should be the same all the way around. Mine is double prong. People bitch about double prong all the time, and I agree single prong is more convenient. In the face of lifting hundreds of pounds though, I never found the challenge of undoing a second prong to be that bad relatively speaking lol. Lever belts are really cool though.

I went with a belt off of ebay for about $30. I’ve had it for over a year now and I don’t have a single complaint (other than maybe I should have gone single prong instead of double). I don’t think there is much of a science to making these things so I felt fine going that direction.

For instance, this appears to be nearly exactly what I bought:
http://www.ebay.com/itm/WEIGHT-LIFTING-POWER-BELT-GYM-FITNESS-LEATHER-STEEL-BUCKLE-XL-/280864985171?pt=LH_DefaultDomain_0&hash=item4164db9053

I’ve got a lever belt from Inzer, 10mm and have been really happy with it.

I recently bought my wife a belt from bestbelts http://www.bestbelts.net/ and I WILL be buying another belt for myself in the future, from them. They can pre-break in the leather so it’s not a huge pain in the ass, they’re fast, will work with you on the phone/email to customize exactly what your belt should be like. Want extra holes drilled in it? They’ll do it. Very nice people, great to work with, and can’t wait to buy another belt from them. When I do, it’ll be the Prime, in a single prong.

ive been using a Schiek belt for a couple of months and now consider it my best training partner. it broke in super fast too.

[quote]dreadlocks1221 wrote:
Ok well I think I will definitely get an inzer, is there a good reason to go with a PR belt over the other forever belts on that page? What about those tapered belts? [/quote]

I always just go with the standard Inzer forever 10mm, with single prong. Never get the double prong, I used to have one and it’s a huge hassle if you’re trying to crank it tight with gear on, or trying to get it off when really tight. The lever belts are nice if you always use the same setting.

I own an Inzer lever belt (10mm) and I don’t consider using anything different ever again. The only con is that if you want to share it with someone or if you use different settings for different lifts you need to unscrew and screw it again. Other than that it’s way more comfortable to use than prong belts, and cooler too XD.

My Inzer single prong 10mm belt is the best lifting belt I have ever had and I have tried many. The Inzer belt, from day one, seemed to feel natural and conform to my body. Though this is a subjective opinion, I believe that there is no better belt out there and it’s worth every penny.