Hey guys.
Beginner here! Would like to get some tips from experienced powerlifters.
Just started strength training and i fell in love with squat and deadlifts( 1,5/1,8xbw) but i hate benching, and recently started to have pain in my lower back everytime i deadlift(coach says form is ok but i will stop deadlifting for some time) so i am focused on squats for a while as is the only one i can do pain free and is my favorite lift.
I have read that the GPC will allow single lift meets for the squat and i decided it will become my priority.
What do you guys think?
I have seen many lifters who compet in bench only meets or push pull, but no squat only lifters.
And how will you program a squat only routine?
I am squatting 3 times a week light day, medium day, heavy day based on 1rm.

Thanks for those who will answer

Not an experienced powerlifter here but I thought I’d chime in anyways.

First off, that’s a horrible idea. You’re a beginner, work everything. Hell, if anything, work your bench more. A lot of newer lifters I know(me included, only my third year lifting) tend to have weaker upper bodies and they work all 3(or 4, including OHP) lifts equally.

As for the squat only meets, it’s too early for you to make it your ‘priority’. Pay your dues first.

As for programming, just get on a program designed by a coach.

First, make bench your priority because it’s lagging. Bench every time you train, once heavy per week, the other times moderate to practice technique (don’t do anything other than comp bench for about 12 weeks). Build your bench by building your upper and middle back too. You should probably row at least as often as you bench.

Your back likely hurts because it’s weak compared to your legs, so do what you need to strengthen it. Back raises and barbell rows will help, as will heavy dumbbell rows. Front squats too. Keep deadlifting, but don’t go beyond 80% until your back feels better.

Lastly, check how much your butt tucks under you when you’re in the hole. If it tucks a lot that is a very possible contributor to your back pain. I’d drop squats to twice a week, and only once heavy.

Thanks both for the tips i will start to bench three times a week and i will join a powerlifting club once i will be in Dublin… about deadlifting i guess i just strained my back i will deadlift light until it is completely healed.
Thanks again!

Benching 3 times a week may be a bit much. I had similar issues with back pain from squatting and deadlifting too often. You may need to focus more on your nutrition and rest. Sleep more, eat more and do some foam/barbell rolling on your back.

Benching 3 times a week may be a bit much

I can tell you from my own experience that it isn’t. Possibly if you’re a very strong bencher it may be counterproductive, but otherwise frequent benching is one of the more reliable means to add weight to the bar.

My personal experience:
I used to hate bench.I did ohp only,incline,dips and everything else in it’s place.Finally I realized that there was nothing I wanted more than a bigger bench,so I got serious,trained my ass off,didn’t cared where I was at the time cause I knew I’d improve and now there’s nothing I love more than pressing a bar off my chest

Would you like to compete one day and even win a metal,a national title or something?
If so train all three.There are way more competitions,more titles to be won,more fun to be had

Are you just a recreational lifter that just wants a bar to bend on his back one day?
Great.Focus on building the squat and do bodybuilding work for everything else.But for fks sake DON’T NEGLECT THE REST OF YOUR BODY.You take the time to go at the gym,you might as well look like you lift

Thanks for the reply.
Thats true i hate benching so much that i replaced it some months with ohp. It is strange because my coach told me i have a nice arch and the ROM is little so he said i could easily add kilos with no problems but i just dont enjoy it. I am starting to bench again because i want to compete, i will train it but squats and deads are my favorite.
Maybe with time ill start to like benching too

Maybe with time ill start to like benching too

Chances are you will.

Move enough weight and you will. This applies to pretty much any lift as far as I know.

My problem with benching too often is a combination of injury risk and bench contributing so little to a total when compared to squat and deadlift. I have hurt my shoulders in the past and it can take a toll on the other lifts.

Maybe with time ill start to like benching too

Remember to thank me when you’ll press 315

my last three cycles were 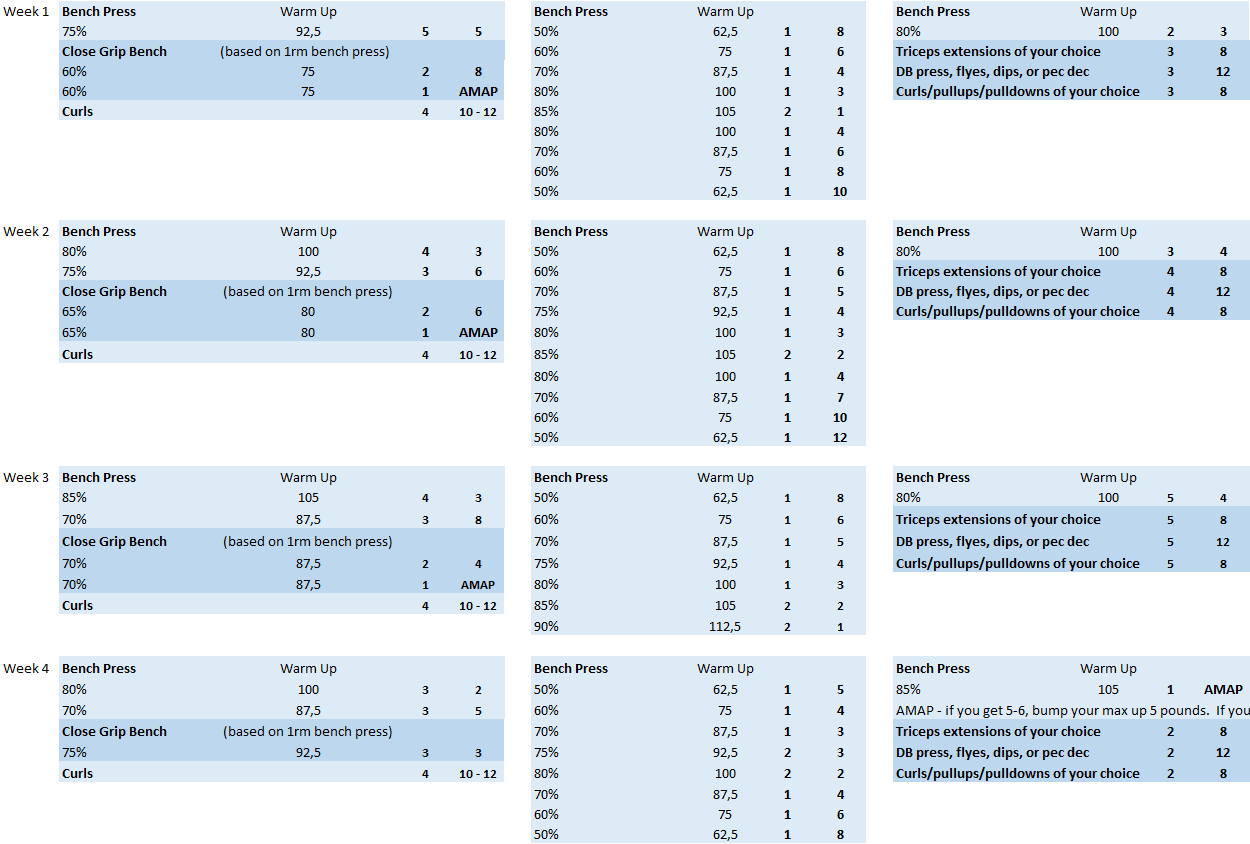 don’t mind the number, look at the %

This + some accessory and voala lol

Injury risk can be heavily mitigated by using lighter loads for most of the bench sets (you don’t need much weight to practice technique); and while I’m partially with you in relation to the total, when you’re a sub-par bencher like I am you have a lot of room to move up before shit gets heavy.

For example, I squat a bit over 500 lbs and DL close to 600 but I’ve never gone beyond 302 lbs on the bench (and that was once only on a great day). At the moment, while everything is moving nicely it is looking like my bench is probably going to be a very equal contributor to increases in my total as I’m beyond the stage where squat and DL increase easily by more than 5-10 lbs. Realistically, I can expect 5ish lbs on each lift every three months. Time was my squat and DL were going up by 10 lbs a month.