Barbell Lifts Question for Those with 20+ Years Experience

I wanted to get some feedback on an assumption I would like verified or corrected.

Are compound barbell exercises (bench, DL, OHP, and squat) something that should be minimized or at least cycled away from as one gets older in training years? Will the wear and tear lead to joint problems that could have been avoided if one relied more on dumb bells, cables, and body weight exercises?

I am mid 40’s and have had my share of shoulder impingement issues over the years. But, in reality, it could also have been from sports (lots of throwing) or genetics (my dad has had shoulder issues).

So, to sum up, is it smart to just run programs like 531 in perpetuity, or is it better to rotate out compound barbell lifts for long term success and health?

Are compound barbell exercises (bench, DL, OHP, and squat) something that should be minimized or at least cycled away from as one gets older in training years? Will the wear and tear lead to joint problems that could have been avoided if one relied more on dumb bells, cables, and body weight exercises?

I’ve only got near 19 years of lifting, but I feel like the only way someone can answer this question by experience is if they lived 2 full lives, and in 1, they used barbell compounds the whole way through, and in the other they cycled away from them as they got older, and then they compared notes.

True words. I tend to always think I need to take some time away from BB lifts after a cycle or two of 531 or other program, and anecdotally I think of strong, older lifters who are inflexible and stiff and always have a nagging injury. While I think of older folks who focused on bodyweight moves, sports, and yoga as being not as strong, but more limber and healthier. But, I may just be noticing things that reinforce my preconceived beliefs.

I think your going on the notion that " isolation " exercises somehow doesn’t put stress on ones joints. Am I correct?

I’ve been hitting it for over 50 years , and the last 2 I’ve been using mostly machines for speed . For me this does not work as well as free weights unfortunately, back to doing squats, bench , dumbbells, barbells mixed with machines . My knees are shot but that was from doing super heavy hack squats. I’m 72 and I don’t believe you get to this age without wear and tear, if I had it to do over again, wouldn’t change a thing .

I think your going on the notion that " isolation " exercises somehow doesn’t put stress on ones joints. Am I correct?

No, actually I don’t do or like isolation exercises. I also don’t use machines at all (no judgement, just don’t like them). I’m speaking more of things like: dips, chin ups, inverted rows, ring exercises (chins, dips, ab fall outs), muscle ups, KB snatches, farmer’s walks, modified Oly lifts, pistol squats, etc… Things that can be very challenging, but don’t use heavy barbell pressing. My theory has been that doing mostly these things, and avoiding sustained barbell pressing, you’d be better off. I want to know if I’ve been wrong.

Honestly some of the exercises you mention are no less demanding than the barbell movements you mention.

Yeah, after a few years of strongman, I’ve grown to consider the barbell pretty tame. The barbell is what I use when I want to give my joints a break from pressing kegs and logs.

T3hPwnisher is walking around upright and without a cane, so you should trust his advice fully.

His workouts are probably the most demanding on here.

T3hPwnisher is walking around upright and without a cane, so you should trust his advice fully.

His workouts are probably the most demanding on here.

I appreciate that, but I’m not a great example of longevity. I walk with a permanent limp unless I REALLY focus on what I’m doing, and my right shoulder is hamburger after many dislocations, subluxations, etc. My left IT band is pretty shot, and every doctor says I’m definitely getting arthritis in my left knee, just a question of when rather than if.

You’re not crazy. Chasing weight on the powerlifts isn’t the only way to train. Check out Dan John and his approach based around movement patterns instead of specific lifts.

Also, its the future now. There are tons of barbells like the Saftey Squat Bar, trap bar, swiss bar, Cambered bar, giant ez bar, etc etc designed to help you minimize wear and tear and abusing your joints.

Maybe reconsider using machines. Some of them are really good. You can easily, directly target areas like rear delts or pecs or hamstrings that big lifts may miss. Sometimes these hard to hit areas are part of the problem people have with barbells.

I think you’re onto something @antiquity. I find my joints feel more beat up when I only use barbells or only lift free weights instead of mixing in cables, machines, and calisthenics.

Studies and anecdotes agree that the bench press and other pronated-grip movements like pullups don’t ideally affect the shoulders when performed for ongoing periods. When I look at each joint’s design, it’s clear that ball-and-socket joints are designed to move through many planes of motion. Limiting the shoulders, for instance, to primarily military presses for year after year of training shortchanges muscle and movement development while forcing the joint to repeatedly move weight through a less-than-ideal range of motion. The same holds true for every barbell exercise.

The more I exercise, analyze physical training, and observe fitness activities, the more I value using cables, calisthenics, and non-strength-specific exercises like agility sprints and swimming.

I don’t have 20 years, only 11 or so but I started in my 40’s and am now in my 50’s. I still train three times a week with a barbell as well as compete. I haven’t had many issues or injuries. I think that may be due to starting a bit older and having a better appreciation of my own mortality and, therefore, less likely to push more than I should.

Additionally, over the summer I joined a local gym that has a climbing area. It’s been a lot of fun and an awesome workout but I get more aggravation in my elbows and shoulders from that than lifting.

I’ve been lifting regular for 51 years, still love the heavy BB lifts, have never suffered a LIFTING injury. I do know lots of people who have. I’m a big believer in letting your body tell you what to do. You’ve had shoulder problems, find lifts, be they db, cable, whatever that don’t aggravate the problem. What kinda of throwing have you done?

Of course, he also admits to having trained pretty recklessly for a long time, and acknowledges he may not have needed that in the first place if he’d been willing to back off a little here & there.

I went through a period in my 30’s where I really focused on achieving tough bodyweight moves: muscle ups, one arm push ups, hand stand push ups, pistol squats, L-sits, front levers. My workouts were designed around these moves, and I was very much into the belief that this was superior than those who did barbell-centric routines.

The takeaways?
-Working out that way is probably more CNS draining than heavy barbell lifting, as it’s simply tough to mentally get yourself up for performing these moves each workout.
-You can get very strong (at least relative strength but also total strength) from doing these moves. It takes a lot of strength to superset 1 arm push ups with muscle ups. That said, my barbell numbers never came close to some members on this forum.
-You still put quite a bit of strain on your joints. I would say I worked around nagging injuries about the same amount of time as when I did more traditional lifting.
-It’s great for natural “weight control” and aesthetics, as you simply won’t be bulking up much if you’re progressing on moves that involve moving your own body.

My longer term plan is to keep with a 531 program most of the time (these fit me well), but also rotate out each big barbell lift every couple of months. For me, this seems more important with the upper body pressing, where if I bench or OHP too long I tend to get impingement. I have found using weighted dips works well as a BP substitute, and for shoulders sometimes I just focus on plate raises and rear delt raises if I feel impingement.

Interesting to hear others’ experiences!

I train 531. I use specialty bars or DBs for all my upper body supplemental lifts , bands or cable for assistance.
SSB or trap bar in the same manner for lower supplemental. Bands or machines for assistance work.
5 pros for most of the time with some heavier cycles occasionally.
I don’t attempt a lift I can’t make, except an occasional DL every few years that doesn’t get off the floor.
I have found fat bar behind the neck press to be a GREAT lift fo keeping my shoulders healthy. I use it mostly as a supplemental after press. 3-5 sets of 8-10, starting light and adding a little weight every set. The fat bar makes all the difference due how it’s gripped.
Also band face pulls or pull aparts. I do a set of 10-20 between each set of squats and DL. That’s my break between sets. It helps me loosen up to get under the bar. I squat with a fairly narrow grip ( 6’, 240)
Enjoy your training

I’m not a huge fan of BW movements. I had my fill of push-ups , sit up, dips,and chins in my teens and 20s to last this and several more lifetimes.

Greetings Antiqity. I have been training one way or another for 64 years, currently nearing 78.
i believe that as you age you CRITICALLY need strength training AKA compound barbell exercises.
i believe that if you push for PR’s with never a break you WILL injure yourself and curtail your health and lifestyle.
So while constantly doing compound heavy stuff, you need regular light periods before going full bore again. And you need to incorporate stretching and flexing exercises in your workout routines.
My sport is Olympic Weightlifting & i impress the young ones at my non-lifting gym with my flexibility. The only thing i don’t do is Bench Press because it hurt my shoulder. i do press on back now.

Have been in the gym for 20 years and I have had many, many older clients.

The shoulders are certainly one of the most common complaints from the longterm barbell lifters. What most have a history of doing is squat, bench, dead, but not overhead pressing.

What happens then is the squat, bench, dead get the person’s shoulders very good at being pulled back and down.

Anybody who has been doing this kind of work for a while and it’s pretty much a sure thing one or both of their shoulders are going to be drooping like this: 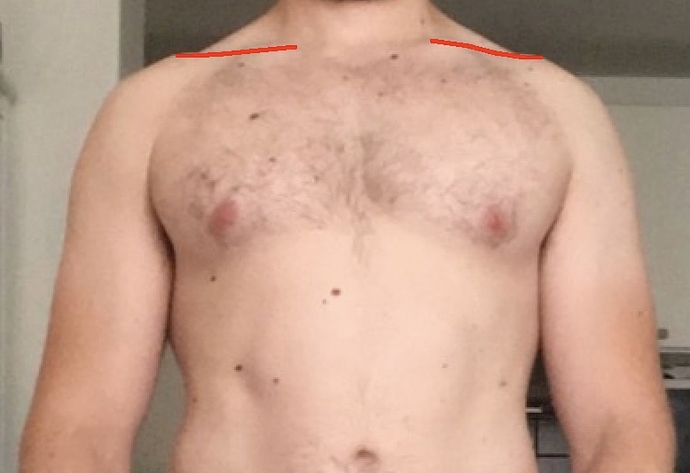 Where the clavicle(s) are sloping downwards rather than upwards.

Impingement invariably follows longterm programming of this nature. After all, if your programming is heavily training your shoulders to be down and back, they tend to get poor at moving up and forward i.e. overhead motion => impingement.

Rotating the lifts out is a good move, as is mixing it up.