I hav got a query that there is a video Arthur Jones training Boyer Coe. It doesnt look HIT at all. Why so? Locking elbows, no continuous TUT, no slow reps at all, lot of momemtum etc…it makes confusions about whatever I learned till today about HIT. I thought you are one of the most appropriate guys to ans this. 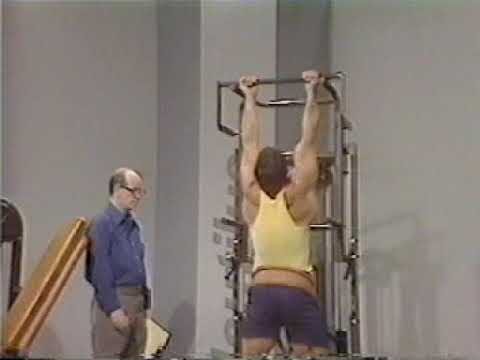 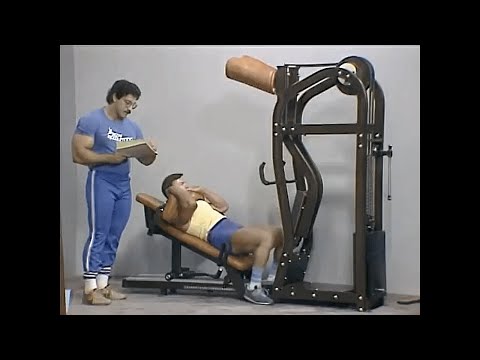 When this was recorded (40ish years ago) the published advice was 2 seconds to raise a weight and 4 seconds to lower. Consequently when this type of material finds its way onto the internet it’s often suprising to a lot of people that it doesn’t seem to fit those guidelines. However, having communicated extensively with Dr. Darden for many years he taught me - and I have come to realise much better - that this cadence was very generalised and “of its time.” With that in mind, it’s then not too surprising to see Boyer doing something different.

Some of the HIT guru’s who became popular later on (after the early days of Jones) were real form nazi’s, wanting not just controlled movement, but precise cadence, uniformity of tension, slow turnarounds, no grimacing or grunting, etc. So it is interesting to see these HIT legends not following many those rules. Some of those reps were almost explosive, trying to use momentum to get a full range of motion.

its his way or its wrong…very close minded individual

he has indicated how wrong Jones, Darden, Mentzer is when its comes to different styles of training

rest pause, heavy duty, 30-10-30, negatives…are all wrong according to Baye

if its not superslow then its incorrect way of training…laughable

If everybody and everything is wrong then what is HIT and from whom should we take its principles? If HIT is same as conventional regular way of training with 3 to 4 sets calling the initial 1 to 3 as warm up and cadence also is 2 to 3 seconds, and momentum also then its same as Arnold or Jay. I havr seen Dorian Yates claiming HIT but it looks same as conventional method.

What makes HIT different and who is or was the guru?

A few Non-HIT people have asked me privately, “What’s all this talk about failure in Darden’s forums?” To them, it looks weird. They know the basics of HIT and understand the concept of failure, but they don’t see the value of all of the discussion about it. In other words, they don’t fully understand HIT. So, we propose we properly define the current HIT so everyone will have a reference point, and we can move on to the effective employment of HIT workouts. NOTE: We’re updating this informatio…

It seems there are almost as many definitions of HIT as there are HIT gurus. They tend to share common elements: roughly one work set to failure per exercise, limited number of exercises (1 to 3) per body part. Training frequency of 3x a week or less, if doing full body. Emphasis is on intensity of effort & training to failure, rather than on accumulating volume, or chasing PR’s in hallowed lifts. But that broad definition leaves quite a lot of room for variation.

You shouldn’t let the absence of hard boundaries or rigid definitions bother you too much. The body responds positively to a wide variety of physical stimulation. There is no right or wrong way to train (though some schemes may be better than others, depending on one’s objectives).

As wiser and more experienced folks have observed: “Everything works, at least for awhile, and especially for beginners.”

Speaking cynically, if someone is overly invested in imposing rigid definitions and hard boundaries when it comes to a discussion of training, they probably have a program they are trying to sell. In other words, a lot of this comes down to marketing and promotion.

Intensity:
Train as hard as is safe to do so
A rep or two shy of momentary failure is likely to yield more consistent results (this can be found in all the early Nautilus books but somehow got lost over the years)

Form:
As precise as possible
When in doubt about rep speed slow down
Emphasise the negative

Duration:
The stronger and bigger you get the less efficiently you can train, so train briefly and infrequently

It’s the application that varies and has caused so much debate. Boyer is clearly not training either as precisely as possible or emphasising the negative. Yates used a lot of momentum. Others are adament that there should be zero momentum - so what!!

Dr. Darden’s current approach is revisiting those principles. They may be permanently amended. That’s life. After all, 3 years before the first flight one of the Wright brothers said man would not fly for at least another 50 years

HIT is different because there is “applied common sense” behind it.

My advice (FWIW), Train a way you enjoy.

I’ve never seen this published, but if you have a link or quote. Thanks.

As @average_al already pointed out, there are several subgroups/developments of HIT - which is natural considering how you put the HIT theory into practice.

Obviously, the Jones/Darden HIT is the modern foundation. I believe the term HIT was Dr Darden’s original idea. Mentzer chose to develop this into a even higher intensity/lower frequency approach (Heavy Duty) which later progressed into the Yates routine, which proceeded even further into higher intensity/overload.

Then you have the appearance of SuperSlow which was popularized by Ken Hutchins in the 80ties (though first thought out by bodybuilders in the 1940ties). SuperSlow have later had a resurrection by Doug McGuff (“Body by science”). Drew Baye seem to have held on to the older ideas of HIT incl. SuperSlow.

As time has passed, Dr Darden have further developed and refined the concept over the years, featured in his many books, which in turn have led to his latest M3 muscle program available for free here on Tnation.

Then you have the later inventors/developers of HIT incl. Brian Johnston (Jreps/Zone Training, High Density Training), Scott Stevenson (Fortitude Training) which widened the concept into more of hybridization routines (with the choice of more volume).

I am certain I have forgotten a dozen important people re HIT history (please add any vital influencers below) - but I’m just trying to make a point about the diversity in HIT theory. As far as I’m concerned Dr Darden is in the center of all these developments, having implemented all of the above concepts over time in his programs, more or less.

This is a great topic going here. I like reading about, listening about, the various versions of HIT. Some things of course make more sense to me and get incorporated into my workouts and some of it doesn’t. Even some of the stuff that falls out the HIT realm makes sense to me.

I was also wondering who said this, and where it was published.

Given how Arthur Jones liked to talk about how brutally hard his trainees worked, was fond of using pre-exhaust to thoroughly exhaust muscles, and seemed to enjoy making his subjects nauseous in demonstration workouts, it doesn’t seem consistent.

It is simply impossible to build muscular size or strength by performing that which you are already capable of easily doing; you must constantly attempt the momentarily impossible, and such attempts should involve maximum possible efforts – but only after the muscles have been properly “warmed-up”, and only after they have been worked to the point of momentary exhaustion immediately before the maximum possible effort leading to a failure is attempted.

12 years later, in the Nautilus Bodybuilding Book, Darden was still putting forth that same message:

It should be evident that intensity is related neither to the amount of work nor to the production of power. Instead, intensity is a relative term. It is directly related to the percentage of momentary ability you are actually using.

Arthur Jones believes that an intensity of effort of 100% will produce the fastest rate of strength increases. His opinion is based strictly on experience.

Is it so that Dr Darden does not recommend training to complete failure now a days?

The earliest mention I can recall was in a 1971 (ish) version of the Nautilus Book. This is from a an interview published in 2008 with Baye. I’ve just read the comments that go along with the interview. It originally took place in 2004 and was re-published in 2008. So… it’s been spoken about since the 70’s and re-iterated by Dr. Darden for around-about the last twenty years.

In this interview the author of the best-selling Nautilus book series retraces his early training days with Arthur Jones and Casey Viator and talks about some of the golden-age bodybuilders who inspired him. Then, he discusses how he merged his... 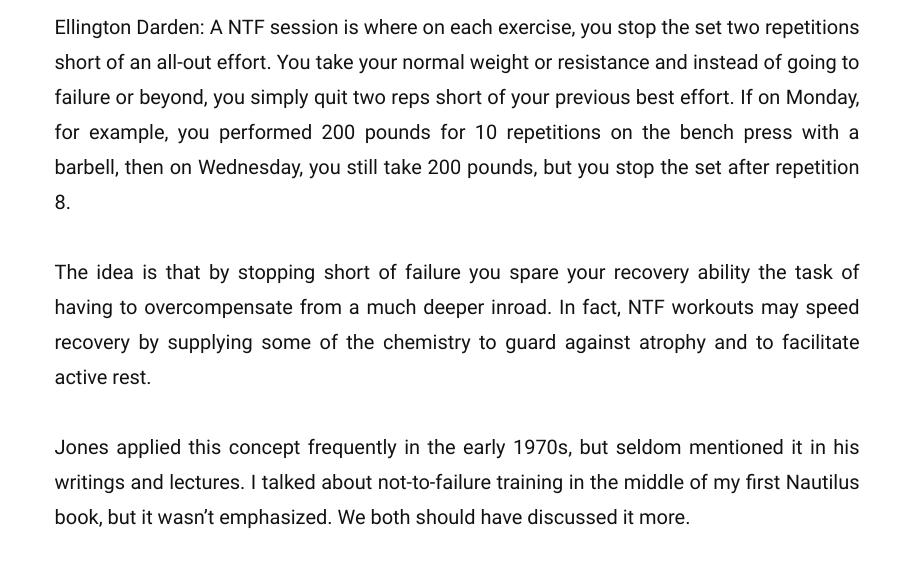 Those NTF workouts were introduced as a recovery option, to be done between TF workouts. This was suggested as an alternative to reducing frequency from 3 times per week to 2 time a week (both TF).

Using a NTF workout as a form of active recovery is different than advising people to stop going to failure altogether because it excessively taxes recovery relative to the amount of extra stimulus that might be provided.

I think I depends on which of his programs you are following.

If you are doing the new M3 program with multiple “layers” of exercise, and training 3 to 4 days per week, then you are instructed to avoid failure (while chasing deeper inroad). I think the same applies to 30-10-30.

If you were following older programs with a single set, standard cadence, and less frequent sessions, going to failure could still be appropriate. Might want to rethink set intensifiers (extended holds, drop sets, forced reps, etc).

Those NTF workouts were introduced as a recovery option, to be done between TF workouts. This was suggested as an alternative to reducing frequency from 3 times per week to 2 time a week (both TF).

Yes right on, was just going to say the same