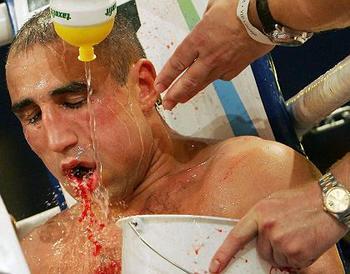 Miranda, fighting relatively dirty, managed to break Arthur’s jaw in round four. But the maniac refused to quit the fight, and somehow the promoter convinced the ring doc to let the bout be continue!

So Abraham actually fought with a goddamn broken jaw!
He couldn’t even close his mouth, which was bleeding the whole time and was mercilessly attacked by Miranda. The bastich even headbutted his unlucky opponent’s swollen yap multiple times.
So the fight went the distance and… Abraham won unanimously!

As remarkable as this was, I still can’t believe how they managed to ignore the risks, putting Artur’s health on the line. He is lucky to that he only has to stop boxing for half a year.
Still, pretty badass.