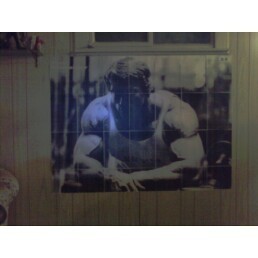 This has more to do with decorating a home gym, but I’ll stick it here anyways.

There is this program online called a rasterbator, funky name but cool program. I thought I would use it on an Arnold pic for my home gym. You know, whenever things aren’t going my way I can look into Arnolds eyes and say, “Lift More, All the Time.”

Anyways this picture screams intensity. You can blow up any picture as big as you want, cover whole walls and such. No need to spend your gym money on posters. This one was 28 pages and its going to take some ink though.

I thought I’d share. Sorry for the darkness and poor quality on the camera phone. Now my gym seems a little more hardcore with Arnold overseeing my training! 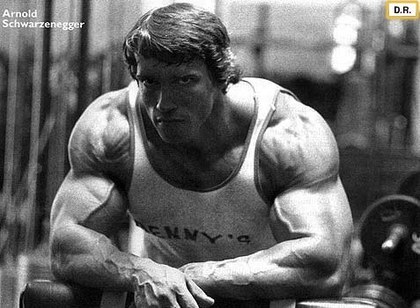 haha thats fucking awesome. Good choice of photo too. I don’t have a printer but I should be getting one soon and god knows the gray walls of my gym need some decoration.

they have this poster of Arnold at my barbershop when he was at the airport, he looks rediculous cant find the pic on google tho.

I’ve seen this on TV before. It also looks great with each individual picture framed and some space in between; though I am sure it also depends on the picture.

I wonder why he’s wearing a Denny’s shirt? Is it Denny’s the restaurant? Seems odd…Awesome picture though, I used to have it as my PC background…

Big thanks to the OP–I’ve been looking for that photo for a while now!