Ok Arnold Schwarzenegger has always admitted using gear back in the day. BUUUTTT…in a recent article he claims he only used a whole 15mg a week under a doctors care. (of what have no idea). I have a hard time myself believing that considering how small of a dosage that really is. Not that it really matters in the first place since I have no issue with the fact he used one bit …just dont buy the amount he claims.

Sorry @bulldog9899, but I need to call a foul ball on you on this one.

I don’t think there are hard and fast rules on gear but he can ad lib because he’s Arnie.

I haven’t worked hard in the gym to have my future exaggeration taken off me now!!!

in a recent article he claims he only used a whole 25mg a week under a doctors care.

there isn’t anything that would make sense at that number per week. I feel this HAS to be taken out of context, or he mispoke or something. I’d want to see the interview.

Dont take it the wrong way Im a huge Arnold fan one of my idols… I just got a chuckle out of this when I seen this quote in a interview in Men’s Health. Correction he claims guy were only taking 15 mg/week

there isn’t anything that would make sense at that number per week. I feel this HAS to be taken out of context, or he mispoke or something. I’d want to see the interview.

Yeah I think it was taken out of context by the interviewer or something along that line. It was in my sons newest Men’s Health 30th anniversary issue. I will try and scan it. 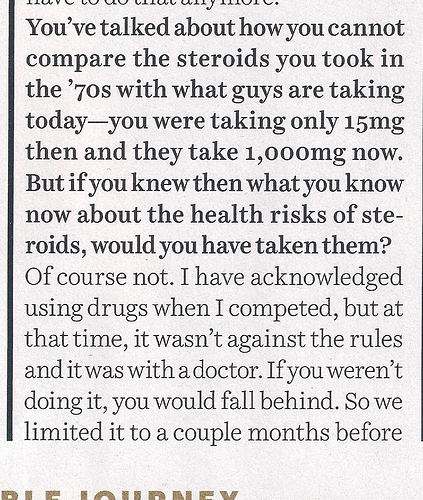 Ok for the record after rereading it is the interview throws out the 15mg… claiming Arnold threw the number out. Either way someone is full of it.

I will try and scan it.

Just take a grainy picture of it with your flip phone, you dinosaur.

Just take a grainy picture of it with your flip phone, you dinosaur.

LOL I actually do use a flip phone!! Now the wife and kids all have apple 8s

At least back in Arnie’s day the gear was pharma grade and accurately dosed. These days, a lot of the UGL gear is under dosed. Even so 15mg /day(of Dianabol I presume) is laughable for achieving the results Arnie got. We all know they took Deca or Primo as well as copious amounts of orals.

The quote from the interviewer about “1000mg (per week)” that bodybuilders take these days is just as laughable. Many non competing gym bros take at least that amount and still don’t come close to looking as developed as Arnold. We know the current pro’s can take around 4000mg/week, before hgh, insulin, or peptides are factored in.

Here’s my interpretation of the interview:

I think the Muscle and Fitness interviewer simply doesn’t know anything about steroids, and he just threw out numbers that he thought made sense. Arnold has no incentive to correct him, so he didn’t. I don’t expect Arnold to EVER talk specifics in terms of numbers and specific drugs at this point. There’s no upside there. He knows that young people listen to him, he knows the impact of his words. He knows that if he says ‘I took 750 test per week and 50 dbol per day’ (or whatever) that thousands of 17 year old kids out there are going to read it and copy it. That would be enormously irresponsible for Arnold to say. So instead, he’s always going to say ‘I wouldn’t do it over that way, and we barely used the stuff anyway.’ He’s intentionally vague here.

Yeah after thinking about it after I posted the scan… I would say your probably spot on.