I’d get blood drawn if your noticing all this. Especially the urge to go to the restroom often.

They say low t is a cause for this but your on t.

The only other reasons I found are prostate and low estrogen. I guess you didn’t have this before trt.

No, I never experienced this prior to trt. Yes, I agree, I’ll pull blood tomorrow and will report back.

Yah good deal. Interesting to see what is found to be the cause. If anything.

Ok, guys I got blood drawn yesterday afternoon and had the results in my inbox this AM!

A few things off that I could use some advice/insight on.

And I know I lacked many tests but did my best within my budget during this time. So please excuse limited testing. It’s clearly not optimal but better than completely guessing…

The blood test was the “HORMONE PANEL FOR FEMALES” through private Md labs.

***also I’ll mention my legs were super sore from some tough training and I had gone to hot yoga the day before and sweat gallons, which is normal
for most in that type of class. In addition, I’m fighting off a cold. Not sure how this could affect specific parameters but wanted to put that out there.
BTW, arm pit stink is not a major concern for me. I was simply trying to see if there was a known correlation to that and urges to pee.

What is of concern to me, is the Creatinine and Chloride being out of range. 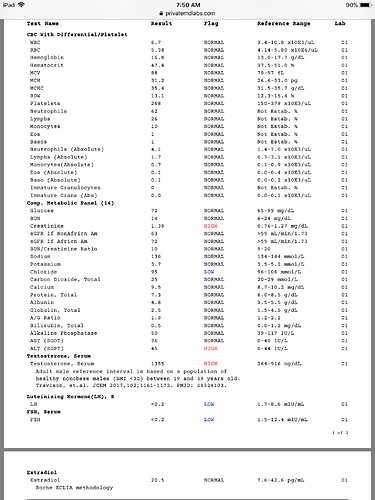 There’s no need to edit the thread title. Simply posting your updates will bump the thread and allow the conversation to move forward with the new info in context.

Gotcha! Thanks
I wasn’t intending to “bump” the thread. Just trying to let those know who’ve already read enough about my BO issue that there was additional information.
Still learning my way around the site.

I could be due to your T/E ratio being really low. Why did you move to ED dosing? Less frequent shots would bring your E2 up to something healthier.

I went to ED injections to help reduce the need for an AI. With twice weekly, my e2 ~60.
I know that wasn’t crazy high. I’m probably overally cautious because I suffered a big chunk of my early life with gynecomastia which I had surgerically improved about 10 years ago.
I haven’t taken an AI in 6 weeks…

Better than I do now!

If you werent having symptoms of high E2 then your ratio was probably good. You could should for middle and go EOD injections and see how you feel around E2 of 40 (assumed).

Thanks for the insight. I agree I need to move E2 up. I’ve been pretty conservative with HCG using only once a week at 250iu.

I think I’ll stick with ED injections for now but bump up my HCG.

Does anyone have any feedback on why I might be experiencing some bloating?

And should I be too concerned with the Chloride and Creatinine being out of range?

Technically you arent low via the range but given your high total T your E2 is low.
Low E2:

HCG can cause water retention via increased E2. Sometime when testosterone is too high, it can throw other hormones out of whack. I think you’re going to find success without HCG, unless you want to deal with the sides.

HCG once weekly will likely do nothing for you.

Thanks, what would you suggest?

I think you’re going to find success without HCG, unless you want to deal with the sides.

I think that says it all.