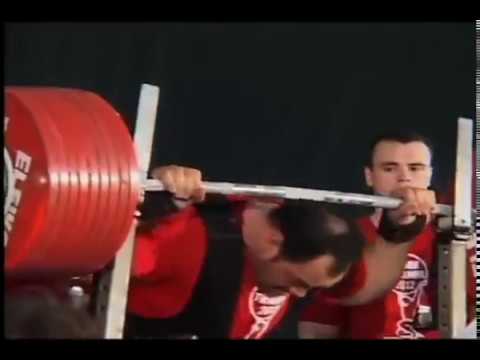 470kg are not suppose to move that fast

Impressive. Though on another note, while i love the attitude of “if you cant walk it out, you cant squat it”, that looked like one missstep means a visit to the hospital…

Would have destroyed the 490 if it was in a monolift. As Karowski once said - the hardest part of the squat is walking it out…

First of all wtf… just wtf…

Walkin out with 1034 and destroying that bitch. I’ve never seen such a thing. This man appears to be half train.

Also he didn’t even need a monolift for that 1078 either, he just didn’t get that one out as clean. The second time he tried it he got it out clean, but he had to have been too exhausted from teetering about with over 1000 freaking pounds on his back from his first attempt otherwise I believe he definitely would have gotten it.

Seriously the walk out was more impressive than the squat itself to me. He was just shakin from all that weight.

Damn. I think I will give the monolift a hug, when I get to the gym tonight.

To each their own, but walking out is one very important skill that needs to be developed. I think that powerlifting is such a limited skills sport that taking away aspects of it kind of ruin it. Shirts and suits ADD levels of difficulty, ADD aspects of skill - this is why I like them. But IMO, agian IMO, when we start using monolifts, it takes away an important skill that is in/was in the sport. Similarily, when we start passing high squats it also takes away skill necessary.

When you watch this, even if you hit 490kg out of a monolit, it would not be nearly as impressive as pickin it up, taking it for a walk then squatting… after teetering about for 20 seconds mind you.

You are right 1000lb squats, unless you do the polka with it first…not impressive at all.

[quote]greystoke wrote:
You are right 1000lb squats, unless you do the polka with it first…not impressive at all.
[/quote]

lol… didn’t say not impressive, I said not as impressive. Relative is very different than absolute.

One of the manliest things I’m yet to see.

I highly believe that this man in the next titan’s will squat 500kg, and it will be epic.

I never understand if these things are raw or not. Is this raw or single ply?

Also, I noticed he has his hands in rather closer than usual for the big guys - interesting

[quote]ros1816 wrote:
I never understand if these things are raw or not. Is this raw or single ply?

Also, I noticed he has his hands in rather closer than usual for the big guys - interesting

I’m 90% certain this is single ply, but I too have trouble telling sometimes.

Also, most super heavy squats are done with hands wide out are due to lack of mobility from years of heavy pressing, and/or the squat suit restricting ROM (I think). As far as I know, it’s generally agreed that hands closer together is better when possible, resulting in a tighter setup.