And they say T causes violence!

PHOENIX (AP) – Exercise guru Richard Simmons allegedly slapped a man who made a sarcastic remark about one of his videos, police said.

Simmons, known for his “Sweatin’ to the Oldies” series of exercise videos set to songs from the 1950s and 60s, was cited for misdemeanor assault.

A fellow passenger recognized Simmons on Wednesday night at Phoenix’s Sky Harbor International Airport as he was waiting for a flight to Los Angeles, police said.

The man “made the off-hand comment, 'Hey everybody. It’s Richard Simmons. Let’s drop our bags and rock to the ‘50s,’” said Phoenix police Sgt. Tom Osborne. “Mr. Simmons took exception to it and walked over to the other passenger and apparently slapped him in the face.”

The passenger, whose identity wasn’t immediately available, wasn’t injured but told police that he intended to file charges against Simmons, 55.

Osborne said Simmons was cited for misdemeanor assault and permitted to board his flight.

That just proves that men with higher estrogen levels are prone to violent outbursts!

Down with soy!!! We must ban all estrogen boosting products.

Quick! Call your congressman/woman and demand that all isoflavones be removed from the shelves of Wal-Mart.

For the safety of the children!!!

lmao! jim rome was talking about this, this morning.

the best part is that simmons was wearing dolphim shirts, a tank top and of course his patented permed dome. can you imagine getting bitch slapped by someone in that outfit? id kill myself.

if richard simmons slapped me in the face he’d eat the rest of his meals through a straw.

i’m not a violent person but come on!!! its richard fucking simmons!!!

yahoo news said that the guy richard ( dick ) slapped was a cage no-holds-barred type of fighter. Haha that would be funny if he retaliated.

The police report says that the guy who he slapped was a cage fighter 6’1" and 255 lbs. Did he slap a T-man? 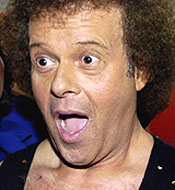 SCREW: Corrections officer in X-rated DUI bust MARCH 25--Richard Simmons was arrested yesterday and charged with assaulting a Harley Davidson salesman during a confrontation at a Phoenix airport. No,

That is too funny. I’m guessing that the man who was slapped doesn’t want his identity known. Imagine living down that tag. “Hey, aren’t you the guy that was beat down by Richard Simmons?” I definitely would have swung back and done some damage. After you’ve been hit, it’s self defense.

Morally it would be like beating the hell out of a 10 year old kid for throwing an egg at you on holloween.

For self defense to be legitimate, there has to be a “seriouse threat” of harm.

Everyone knows its impolite to hit a woman, the cage fighter did the right thing.

Richard Simmons has to be the most efeminant man on the planet. I’ll bet his T levels are zero.

As much as I like to make fun of Richard Simmons (and who doesn’t?), you gotta figure that at 6’1" and 255 lbs., this guy probably looked pretty imposing. All of the cage fighters I’ve seen are definitely dudes I wouldn’t mess with.

Maybe he’s got a pair after all. He sure hid it well all those years.

richard simmons should have kicked him in the balls.

leave richard simmons alone, he was minding his own business.

He doesn’t have a pair. He just knew that since he’s such a little bitch, the big dude wouldn’t hit him. It would be like hitting a child. Mr. Simmons knew that, and took advantage of it.

Leave it to ZEB to put some thought into this. Good point!

Thank you ZEB, This guy obviously had some problems. He should have apologized to richard but instead ho goes and cries to the cops! This is the typ of guy who grew up the bully but when the little kid with glasses finally had enough and hit back the kid goes and cries to his parents and tries to get the kid in trouble.

We all thought Ralphie was a hero in a Christmas Story for flipping the switch and pounding that bully. Seems like the same situation here.

If this guys name gets out he’ll be the laughing stock of the mma community, not only did he get bitch-slapped, but he gets the police involved.

Off of Yahoo. The guys name is Chris Farney, 23 years of age.