Ancient Aliens: Do You Believe?

What you guys think?

What do you think of the facts and opinions they present?

Personally I do believe in some of it. I believe in life outside of earth. In a universe this vast, no one can convince me there is not life out there.

When I went to Nepal a few years ago, I saw these incredible temples that were built thousands of years ago that were so detailed, I couldn’t believe they were man made. Some of the drawings and paintings did present the ideas of “visitors from another world”.

A part of me feels like maybe not aliens, but there was some amazing technology (maybe even like modern power) back in the day. But there is a portion of “lost human history” that somehow it got lost or wiped away. If they were that advanced back then, I feel like we should be WAY more advanced in technology than we are currently.

I read “Chariots of the Gods” quite a few years ago. It’s an interesting concept. As an empiricist, I have a hard time believing anything without proof. That said, given the complexity of our existence, a series of random events appears to be the least plausible explanation for our creation.

That’s because the records were in Atlantis.

I’m very skeptical, but at the same time there are a lot of very strange uncanny objects and references to sky people things.

This lands me solidly in the “Hell if I know?” camp.

I think it’s demonic. I believe the aliens/demons will fully reveal themselves as our creator in the end times fulfilling the biblical prophecy of “fooling us.”

Maybe it wasn’t aliens at all…

I don’t even care to be honest

I mean I worry about a lot of things in life, and alien isn’t one of them.

They are free to exist if they do and to not give a shit about me.

I’ve watched 10 minutes here and there of a few episodes of the Ancient Aliens show and the line you hear the most “…as many ancient alien astronaut scientists have theorized” is very funny to me.
You saying you couldn’t get a consensus from these lunatics? They didn’t all agree on this made up bullshit? Ha!

I think it’s demonic. I believe the aliens/demons will fully reveal themselves as our creator in the end times fulfilling the biblical prophecy of “fooling us.”

wtf?
Are you joking?

He’s was planted by the aliens to discredit the truth, clearly.

Why does nearly every ancient culture credit their origins with the sky? It is an interesting thought experiment.

Many cultures have a great flood story. “Terraforming” by the aliens no doubt.

When you read about angels in judeo-christian scripture, they aren’t wispy ghost like fades. They were here physically, like when one broke Jacob’s hip. Elijah went to heaven on a chariot of fire. Obduction confirmed! 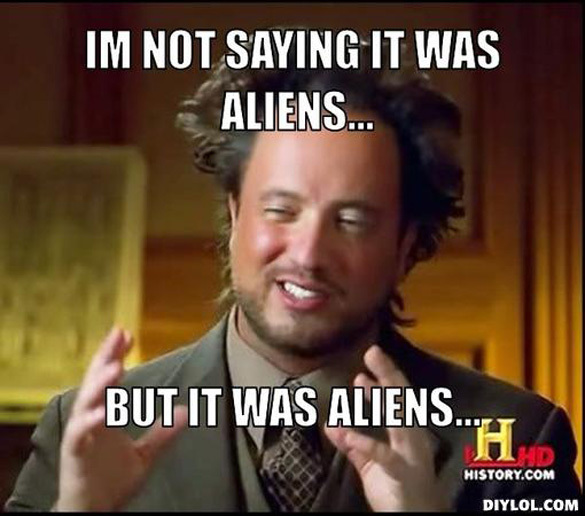 Interesting facts about the guy on ancient aliens. He does not have a PhD. He actually was a bodybuilder promoter at one time.

When we look at ancient art or constructions (Egyptian pyramids for example) I think we underestimate the resourcefulness of the people as well as the time the dedicated. Even looking at medieval cathedrals covered in sculptures and paintings, huge intricately laid out mosaic floors with millions of pieces. I think we are too used to things happening fast. These people were in no hurry and their creations took lifetimes or lifetimes upon lifetimes to create.

I do believe there is life out there (countless stars with countless planets, there has to be), but am skeptical that they built anything here.

When we look at ancient art or constructions (Egyptian pyramids for example) I think we underestimate the resourcefulness of the people as well as the time the dedicated. Even looking at medieval cathedrals covered in sculptures and paintings, huge intricately laid out mosaic floors with millions of pieces. I think we are too used to things happening fast.

Some of the stuff is pretty crazy though, the size of the ‘bricks’ in some of the pyramids etc…

Given how short (relatively) the time gap between the evolution of humans from micro-organisms is, I am almost certain that if another planet has the capabilities to support life they would be extremely far ahead or behind in terms of progression.

They would be at a point where they watch and study earth just how people here study pond life.
They could of visited Earth at one point and intervened with humans then took a step back to monitor us as they do now.

Maybe this is why humans have a obsession with a God like figure monitoring them but is so advanced they can’t be detected. Think how a tadpole if it had a bit more brain power might thing there was a omnipotent carer looking after their “pond”.

Or a species on earth evolved so far ahead that it removed its trace on earth then watches us from space or something(probably not).

Might sound a bit loony but this explanation works for me and sort of explains it.

I am almost certain that if another planet has the capabilities to support life they would be extremely far ahead or behind in terms of progression.

I think this is a good point. It is hard to think in time scales. For example, Cleopatra lived closer to the creation of the iPhone than the building of the Great Pyramid.

Dinosaurs were around for a crazy long time, the “aliens” might be in that period of their progress.

Also the idea that aliens must certainly live out there somewhere in this vast universe I’d almost bet my life on. I’d almost call it a certainty.

Still…that does not mean aliens come here at all. Does not follow logically. Nope.

Why would they? There would be no point for them. All humans ever do is bicker with each other and try to be/feel better than others.

Lol, bodybuilder promoter. His credibility is completely gone for me.