Anavar/Winny/Clomid to Retain Muscle While Cutting?

I’m 5’9 at 228lbs, 27 years old and have been weight training for about a decade. I recently began cutting (something I rarely attempt) as I believe I’m around 18-20% BF. I was doing some research and came across information that shouldn’t have been new to me, but it was: you’re going to lose muscle when leaning out… I know, it sounds dumb. I’m not trying to get ripped, i just want visible abs and for it to be sustainable - ideally WITHOUT losing the muscle i’ve put on over the years.
I imagined (naiively) that increasing training intensity while being in a ~500 calorie deficit daily would allow me to retain muscle mass, but I’m having doubts now. I’m still willing to lose some muscle if it means leaning out, but I’m hoping for it to be minimal.
Long story short: I once aqcuired Anavar tablets through a certain company who left out some other items ordered. I contacted customer service to find a surprisingly compassionate representative who decided to re-send the ENTIRE order, resulting in a large surplus of Anavar tabs, along with Winny, Clomid and Clen.

I haven’t started taking anything yet (I’ve never cycled), but I would like to get ahead of the game if I can… I really don’t want to lose much of my hard-earned gains by leaning out, a sentiment I’m certainly not alone in. What do you guys recommend taking to reduce muscle loss while being ~500 calories daily defecit?

Was also curious if potentially running a SARM like Rad-140 at a low dose would be helpful for this as well. Really just hoping for some advice/guidance, I haven’t dedicated myself to anything but the diet yet. 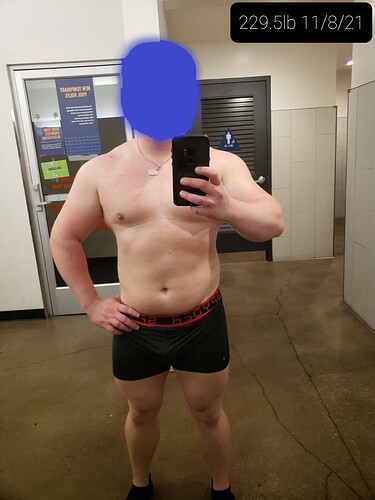 Testosterone at trt amounts and anavar. But for you I would not recommend either. Anavar-only isn’t a great idea and shutting down your natural testosterone production for three months or more just to cut seems pretty dumb from a risk/reward perspective.

You’re going to lose some muscle. That’s how it works. You won’t lose a ton, but there will be some amount that you begin with that won’t be there when you reach the finish line. It’s part of the game. Unless you’re prepared to take unnecessary risk then you should accept that cutting sucks but it’s something you want to do anyway.

No, won’t help. Will shut you down.

Do you have a photo (face blurred) to share for evaluation?

deally WITHOUT losing the muscle i’ve put on over the years.

Some is inevitable. The slower you go the better. Aim for 1-1.5lbs per week.

Nothing, nada, zilch. This will end in disaster. Don’t screw up your hormones especially during a cut. Just do it SLOWLY. 3-500 calories below maintenance. Track your weight daily. Circle your lowest weight for the week and compare to the lowest weight the next week. If you’re trending down 1-1.5lbs per week thats great!

increasing training intensity while being in a ~500 calorie deficit

I’ve read some stuff recently that makes me question this. What I read basically said 1. Do the things you used to put on the muscle in the first place when trying to lose fat. Obviously adding a little extra LISS isn’t going to hurt anything.

Makes sense, the dude saying it was Paul carter. I seem to be a big PC fanboy lately but damn, dude puts out decent context that makes sense

I’ve been a @Paul_Carter fan since before I realized I was a Paul Carter fan - true story. I used to read T-Nation casually and found myself gravitating towards mostly PC articles… It wasnt until years later i realized all the articles i took in as religion were from Paul.

To your point #2, it seems counterintuitive in a way because if your body is being taxed physically - it needs that muscle to continue performing at that level. Going catabolic seems like it’s the opposite of what it should be, but then again - our bodies care more about being alive than lifting heavy shit.

I will try to add a picture later today - I can tag you in this thread. I’m tracking macros via MFP and keeping a training log as well. I only just started on this cutting phase Monday, but I took a day 1 photo as well. I intend to log it on a new thread once I have a bit more info to provide, and perhaps more weekly progress photos.

I track weight as well.

On such tiny deficit you shouldnt lose more muscle than you would lose anyway while cutting.

Anavar tabs, along with Winny, Clomid and Clen

These are something you ADD to injectables, not the ones you do solo unless its for a female.

You have enough weight to lose and 500kcal deficit is so small, that you shouldnt need any drugs, especially since you havent cycled ever.
What you can take tho, is HGH. Will help a bit with fat burn, retaining muscle and wont fuck with your hormones.

Yes, i agree with this. Its funny how people always think that they need to train differently to retain muscle vs when they want to build it. You just keep doing what you were doing and eat less. Do some refeeds, maybe lower kcals on rest days, at least maintenance kcals on training days etc.
Anyways, its 500kcal deficit we are talking about, not 5000, so… at the end it shouldnt even be noticable.
I do applaud for those who can do 500kcal deficit for half a year straight tho. I rather just fast for 3 days and be done with it

What you can take tho, is HGH

I’ll have to read up on HGH a bit more. I know it’s top notch stuff, but I guess I stopped reading after I saw the price tag😅

I eventuality would like to compete so I’m using this as a test for myself to see if I actually have it in me to stand out. That being said, in planned for ~500 cal deficit and I’m finding myself closer to 900-1000 deficit so far.
Thank you for the feedback!

I don’t really have the time to do Incline walks between work, school and family, so I’ve added 10-15 mins of moderate HR cardio to hopefully get about the same result.

You might be right about this, but honestly the % is a bit irrelevant as I intend to continue calorie restriction until I like the way I look - at which point I will get a DEXA scan.
I’m finding myself at about 800cal deficit daily so far - we’ll see how it holds up over the weekend

Honestly I would put you 25% or more but as you said that’s irrelevant. The good news is you clearly have muscle under there. The bad… you absolutely must sort out that body fat before you cycle. Run a 12 week cut for starters and don’t worry about muscle wasting. I say that now because I assumed your 18-20% initial assessment was accurate but its not. If you can get yourself to a lean or leanish point then run your test cycle for growth. Muscle should snap back and you will be in a much better position not to end up fatter after your cycle than before you started.

Honestly I would put you 25% or more 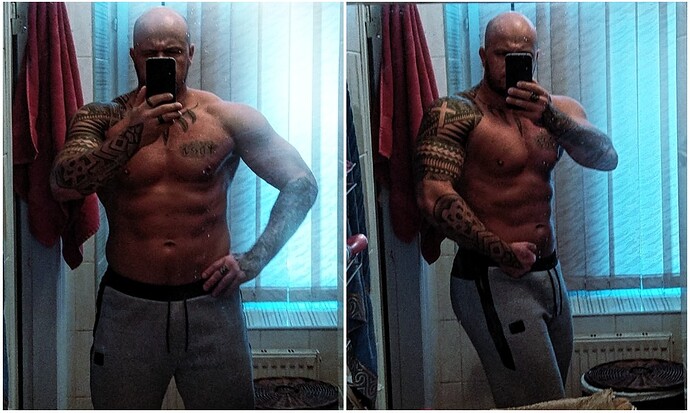 I believe this is me at 20%…
This is like Two-Fiddy at 6’2… he is a bit lighter and a bit shorter so i guess we would hold simmilar mass proportionate to our weight/height maybe. So yea… 25-30%…

I would honestly be quite surprised if I was that high, but I have no legitimate method - or desire to prove either of us right. In any case, I’m using the feedback I’ve gotten so far as motivation to push harder and diet a bit more aggressively. I hope I’m not that far off on my assessment of BF% but maybe I am… I’ll end up getting DEXA scanned when I get much closer to looking the way I want, but I’ll just have to stick with it until then.

Happy to take any tips in the mean time though- I intend to start logging progress in a new thread: I’m open to any tips/advice you’d have to give.

You’ve been given great advice by some of the most experienced and knowledgeable forum members regarding PEDs, training, and dieting, so I won’t repeat what’s already been stated.

You said you’ve been training for a decade but never dieted before - I take it your main goal was to gain as much strength as possible. Correct me if I’m wrong.

I find HIIT superior to LISS for weight loss while maintaining muscle, but some may differ from my opinion

I totally agree… i find that doing hours of LISS makes people skinny fat. I have seen this on myself and on some people i train - if they diet and start doing 60+ mins of LISS a day they all end up looking skinny fat. Some of em actually looked better fatter and fuller.
HIIT pumps the muscle, makes your tired, but train the explosiveness, athleticism, your muscles are pumped, full, sometimes even sore and you can count that as some assistance exercises also.
Im a huge fan of bodyweight exercise circuits and amraps.
I think the only people who hate on HIIT are the ones who just cant do it. They drag their ass on stairs or treadmill on minimum speed and call that cardio… You can accomplish that bullshit by doing 200 jumpingjacks in 2min, lol.