An Interesting Bit of History

Hitler was a Rothschild grandson. Pretty cool, huh? Of course, conspiracy theorists would have a field day with that.

Dolfuss, the Austrian head, threatened Hitler with publication of his findings. 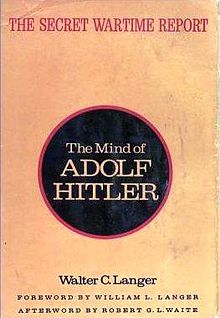 Walter Charles Langer (February 5, 1899 – July 4, 1981) was an American psychoanalyst who was best known for preparing a psychological analysis of Adolf Hitler in 1943. Langer studied the field of psychoanalysis at Harvard University in Cambridge, Massachusetts where he also worked as a professor upon completion of his education. The field of psychoanalysis later led Langer to be employed by the Office of Strategic Services (OSS) where in the year of 1943 he prepared a psychological analysis of A...

“As a result of this investigation a secret document was prepared that proved that Maria Anna Schicklgruber was living in Vienna at the time she conceived. At that time she was employed as a servant in the home of Baron Rothschild. As soon as the family discovered her pregnancy she was sent back to her home in Spital where Alois was born. If it is true that one of the Rothschilds is the real father of Alois Hitler, it would make Adolf a quarter Jew. According to these sources, Adolf Hitler knew of the existence of this document and the incriminating evidence it contained. In order to obtain it he precipitated events in Austria and initiated the assassination of Dollfuss. According to this story, he failed to obtain the document at that time since Dollfuss had secreted it and had told Schuschnigg of its whereabouts so that in the event of his death the independence of Austria would remain assured.ï¿½?? Langer’s information came from the high level Gestapo officer, Hansjurgen Koehler.”

Note: Hitler would not be a Jew but a mischling (their defn).