An Addiction to Tattoos

I would like to see how many folks here are addicted to tattoos. I spent most of my adult life without them. Ironically, I spent many years in an outlaw motorcycle club surrounded by men covered from head to toe. I never had the urge to get one. Then one day I woke up and decided to get one…soon after I got that one, I started looking at the areas next to that tattoo and it just didn’t look right. I’ve only been getting tattoos for 3 years now but I now have full sleeves (one down over my right hand), both shoulders, chest and upper back. All of mine flow into the others so it’s more like one huge tattoo. I’m sure before I’m put into the ground that i’ll literally be covered from head to toe. Does anyone else share that same addiction? Here’s some of what I’ve got going on now. 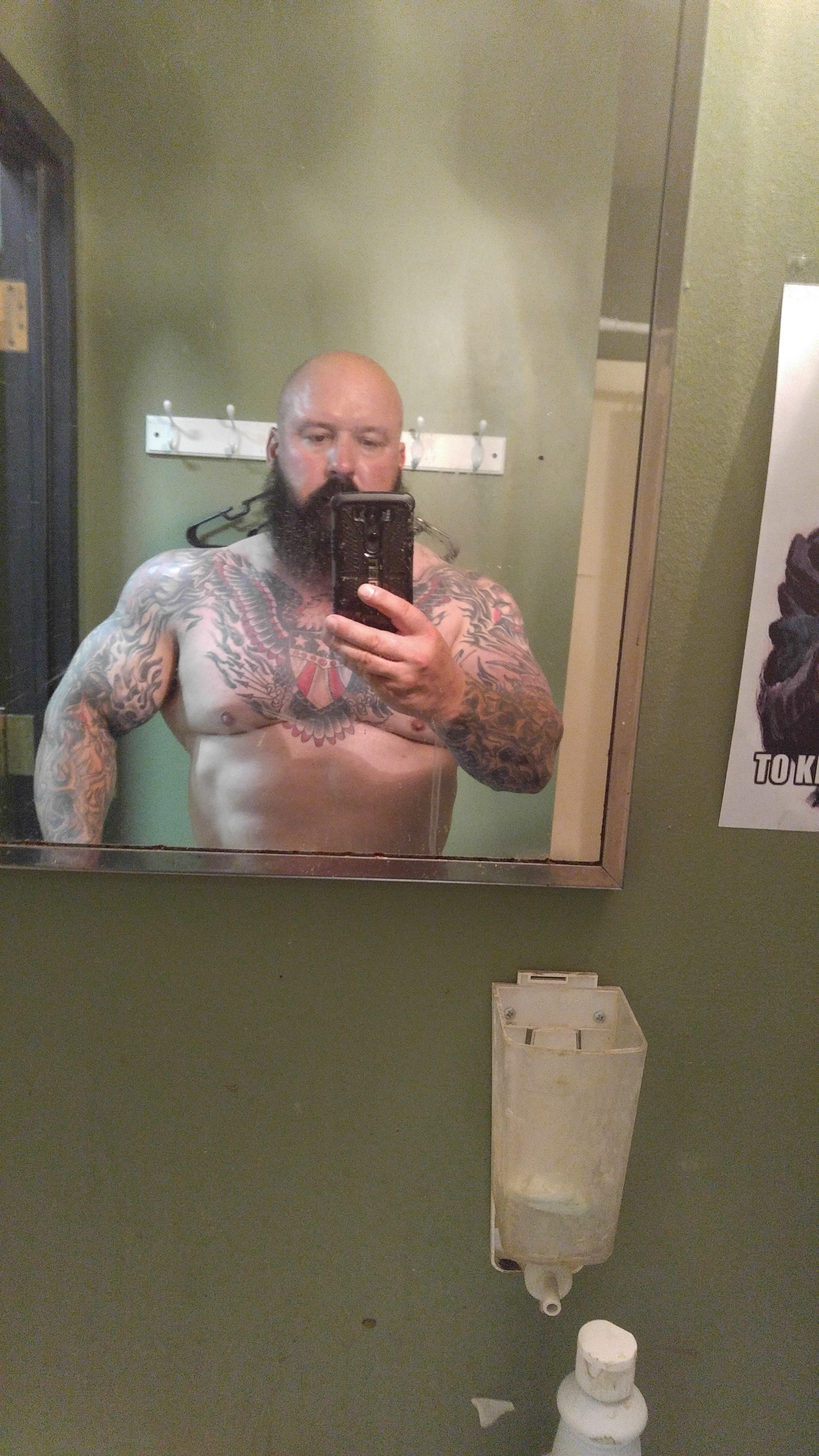 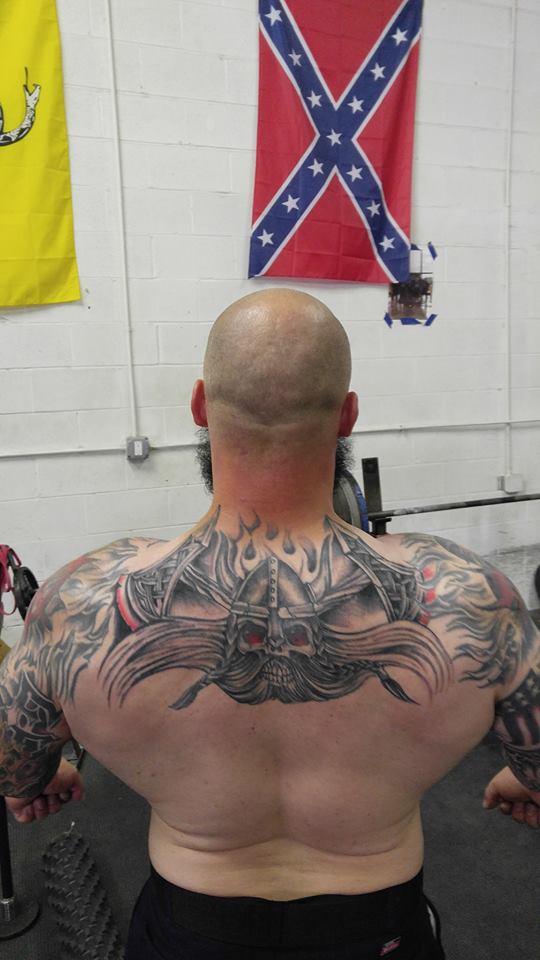 I like that they all build off one another, I too am an adult male that never had the urge to get any tattoos, although in the past 6 months for some reason or another that bug has bitten me…hard, ha. Curious to see what all folks have as well.

it’s crazy how it happens. I’m lucky that I found an awesome tattoo artist that has taken my ideas and made them into reality but also cool. I don’t have a creative bone in my body. He’s amazing…at first I was very nervous having someone go to town on you knowing that it’s permanent. All of my tattoos are American traditional which has very thick outlining. I remember watching him do the outlining thinking…uhhh…I’m not sure about this but then when it was done it was amazing.

Do you have any picks of your tattoos? I would also like to know the stories behind folks tattoos. All of mine have very significant meanings. I don’t have any sort of schedule set up for my tattoos. I don’t even think about the next one. In every case I’ve woken up in the middle of the night with the idea in my head and exactly where it’s gonna go on my body.

At the moment I don’t have any, I’ve talked myself into, and out of, about a hundred at this point haha I have a very artistically talented family member who I am commissioning to draw some ideas up for me, their work will translate really well into tattoos (strong lines and shapes, easily transferred/traced/reproduced.)

I hear you…I’m glad I waited until now to start my journey. If I had started when I was young there’s no telling what crap I would have ended up on me. I respect some people’s opinion that tattoos tell the tale of their lives but there’s parts of my life that I would rather not remember.

I’m sure once you start that you will be like me- you won’t stop. I always joke with my tattoo guy that I’ve already put a new wing on his shop. He does cut me a really good deal though being such a frequent flyer.

this is my favorite tattoo (on my shoulder). You have to excuse the pose…it’s the only picture I have of this particular tattoo. It’s my version of the devil whispering in your ear making you do horrible things. The entire tattoo was an original created by my artist. unfortunately you really can’t see the man’s face but you can see the torment in his eyes. 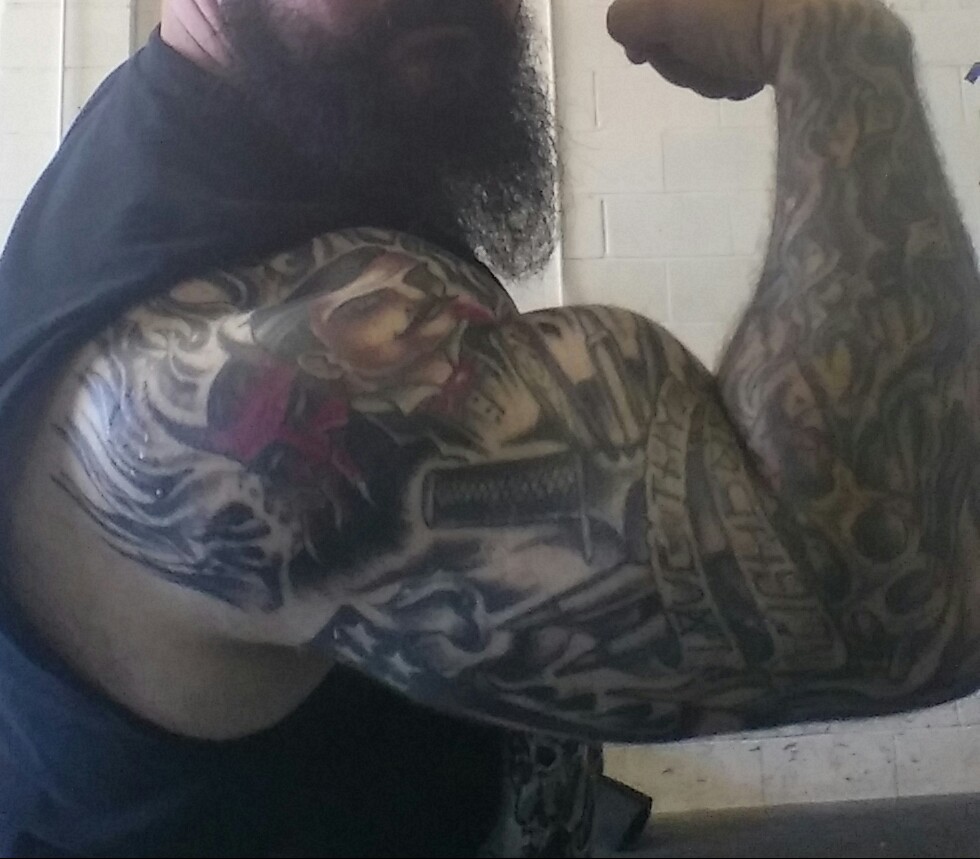 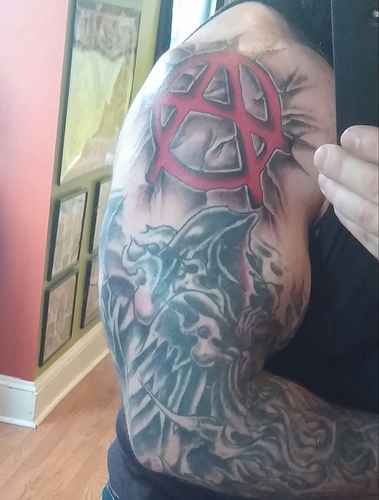 I can see that…maybe my tattoo guy is a closet star wars fan.

Ink looks good, man. I’ve got a few, but it’s been almost ten years since my last one. I’ve had the itch lately, though…

I want to get a half sleeve covering my left forearm, but I’m a fucking accountant so not sure exactly how that’ll go over…

It’s better to beg for forgiveness than ask for permission…at least it’s always worked for me.

Ha, ya it’s not a big deal. I could just wear long sleeves. I probably should anyway.

Really the only hold up is trying to figure out what to get. I’m not a big fan of just picking something off the wall. All of mine mean something to me.

I’ve promised myself I’m going to get a tattoo of a double-headed eagle, you know, the old hapsburg sort, on my shoulder, once I can get 100kg overhead. That’s the only tattoo I really want.

That will look cool! I have an eagle covering my entire chest. When you get that OHP you’ll have to post up that new tattoo.

I’ve had a pretty healthy obsession with overhead pressing myself. Nothing says STRONG like pressing a ton of weight overhead.

I’ve gotten a couple ideas off the wall but changed them to fit my style. I’ve always liked sailor jerry’s “love thy neighbor” tattoo but wanted to change a few things to fit my background.