Am I Messing Too Much with This? 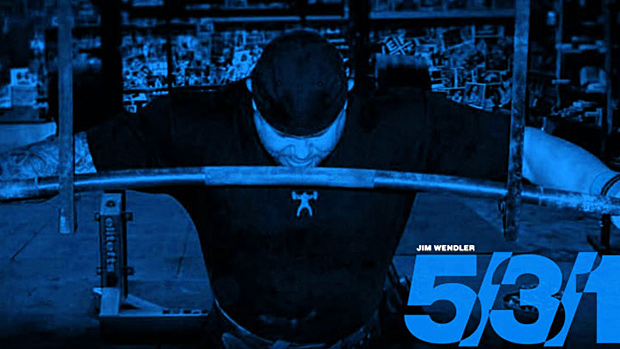 Jim Wendler's 5/3/1/ program promises slow and steady gains that will eventually turn you into the strongest guy in the gym. And it delivers, every time.

I just want to workout three times per week so I’ve got other days for conditioning and mobility work. So using that template:

I don’t have a machine for leg press or leg curls and I like front squats and cleans. I have lower back problems so was hoping the GMs would help with that. So as well as rehabilitating my lower back I want to get a bit stronger and in better shape as I think I’m what is currently called skinny fat (148 lbs, 5 ft 4 inches, male, 35 years old).

That could probably work if you’re doing really well with recovery, and eating a lot. But since most people don’t sleep or eat enough, plus your age, I’d guess it may get to be a little too much.

Jim has an article: A Letter to Young Jim Wendler

In that, he has this program:

He also has some assistance work included, mostly bodyweight movements and then some other forms of pressing and pulling. He talks about the 3 movements he considers the most important - back extensions, situps, and chinups.

I’ve done this before, since like you, I enjoy front squats and cleans enough to want to include them. I feel they help keep me “athletic” and flexible.

If you’d want to include some light good mornings after one of the days, you probably could, but go light enough that you focus on the movements and performing it correctly. Going too heavy without being prepared will only serve to further hurt your back.

One of the best things I’ve seen for helping lower back issues is strengthening the glutes - doing some bodyweight glute bridges (2x10 w/ 5 sec. squeeze), bird dogs (2x10 w/ 5 sec. hold), leg abductions (2x20), and clams (2x20) daily has worked wonders in people I know. And yes, keep doing band work for your upper back regardless of if you’re experiencing problems. They’re great, and I’d do a minimum of 100 reps daily.

I’d recommend this program since it works the legs, hips, and back every time, and you’ll get really strong provided you’re recovering and eating. Do minimal assistance work if needed (chinups and good mornings would be good enough). If you have access to a reverse hyper machine that’d be great. If not, work your glutes daily and you’ll start to feel better.

Try this, and focus on getting stronger at the main lifts, and seeing how well you can recover from it. If it’s going great then the best choice would be just to stick with it. (Don’t fix what’s not broken.) If you don’t want to stick with it, begin adding in assistance work and you’ll basically end up with your version. If it’s too much, then your’s would’ve probably been too much since you had more work in there.

But try this out. See what you think.