I don’t Aways follow the drama around the sport, and Boston Loyd is certainly a questionable figure to give anyone crap, but calling out Ameen (who I don’t know much about admittedly) is pretty damn funny. Plenty of industry folk trashing Ameen on this FB post.

Guess it Just goes to show that you can brag and BS all you want online but eventually you need to put up or shut up. 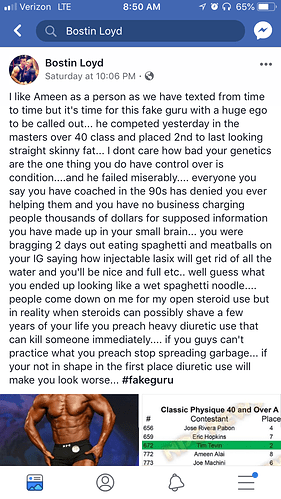 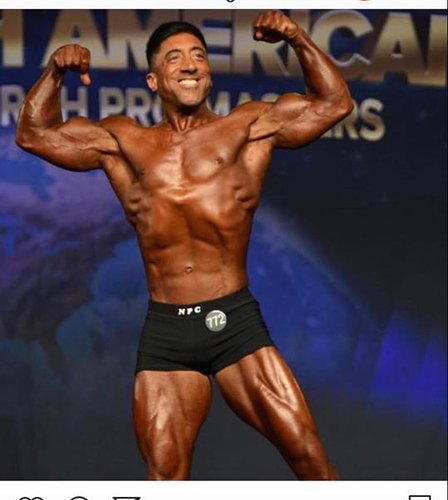 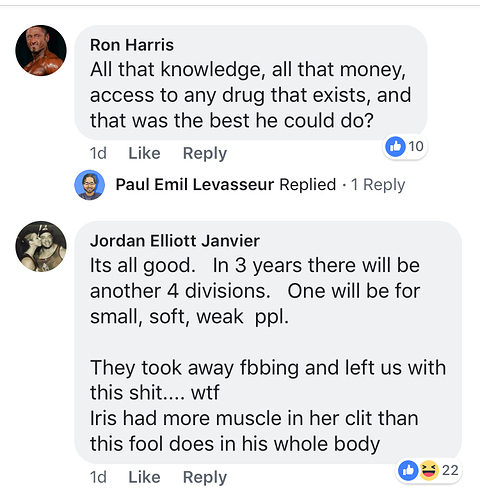 lol, well, the way the industry (sport) has gotten you’ve got people making crazy claims, young kids quoting studies as they argue with pros, eventually when people are forced to put up, it can result in situations like this.

So like, I know strength isn’t totally relevant to BBing but not knowing who Ameen was, I went on his “Guru Ameen Alai” Facebook page and he had posted a video of him entitled “Hit a PR on incline DB”, and it was him with 95s which he never would have gotten up without the help of some girl behind him who was curling his elbows, and he grinds out 6 terrible reps with foot shuffling and back arching while her hands never leave his elbows. I’m flabbergasted.

He’s a drug guru. On other boards there’s guys who have supposedly used him posting his protocols and they’re pretty fucking scary.

I can’t help but feel that the last 5-10 years, most experts, coaches and “gurus” that handle ifbb pros are simply those willing to tell someone elseTo take dangerous levels of various PEDs.

Remember when guys like Chris Aceto actually talked about nutrition and used diet and cardio to get their clients in shape? I don’t mean just pushing organic this and that while injecting god knows what, I mean actually relying by on how the body handles nutrients as the main tool.

Nutrition and training? Come on Stu, those are a small part of the equation lol. Who needs to work hard and love the process anymore when you can just take everything under the sun and post pics on Instagram?

One of my training buddies mentioned to someone that he felt stagnant and needed to kick things up a notch. He isn’t on anything and was thinking along the lines of shuffling his schedule and maybe changing up some things in his training. What did the coach think he meant? Well, he recommended taking a stack of Sustanon, EQ, Test C and anavar lol.

I laugh with one of the guys at my local supplement shop about how everyone comes in now grabbing bottle after bottle of SARMS and god know what while they look like they barely have a grasp on how to eat and lift.

I don’t have any beef with going that route but there is a time and place for it and in my humble opinion it’s after you have a solid base and a toolbox full of tricks.

There was actually a time in which gurus like Scott Abel, John Parillo, Dan Duchaine, Chad Nichols, and Chris Aceto knew a great deal about training and/or nutrition. Or competitors took the time out to learn about the topics and apply it themselves. Granted some mentioned, according to some people, recommended heavy drug use, but I think that’s because of what became necessary to compete at a high level in the late 80’s and 90’s.