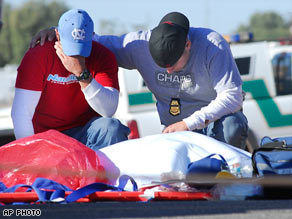 [u]Border agent killed by drug smuggling driver[/u]
A U.S. Customs and Border Patrol agent was killed Saturday when he was struck by a car driven by a suspected narcotics smuggler, officials said.

“Agent Aguilar’s death serves as another stark reminder of the risks our front-line agents and officers face each day,” Basham said.

Aguilar was trying to place spike strips in the path of two vehicles believed to have illegally entered the country from Mexico when one of the vehicles hit him, agent Michael Bernacke, a spokesman for the agency’s Yuma sector, told The Associated Press.

Both vehicles drove back across the border into Mexico.

The fatal incident occurred in the Imperial Sand Dunes Recreation Area near Andrade, California, Basham said. Andrade is just over the California state line from Arizona.

The area is popular with off-road vehicle enthusiasts but also is frequently used by smugglers carrying people or drugs.

Aguilar is survived by his wife and two children, along with his brother, who is also a border patrol agent, a Homeland Security Department statement said.

“I am outraged by this tragic loss,” said Homeland Security Secretary Michael Chertoff said. “I have spoken to the Mexican ambassador, who gives me both his condolences and deep assurance that their government will be resolute in tracking down the perpetrators and bringing them to swift justice.”

Federal, state and local authorities are working with Mexican police and military authorities to apprehend the suspected killers, he said