B&C has been mainly test, trying Deca and Tren for short runs but quickly returning to test. I ran Dbol for a few weeks at a time and accutane at low doses for periods to control acne, but not at the same time. I am 25 and want to come off for good.

These bloods were taken 5 weeks after last nolva dose. 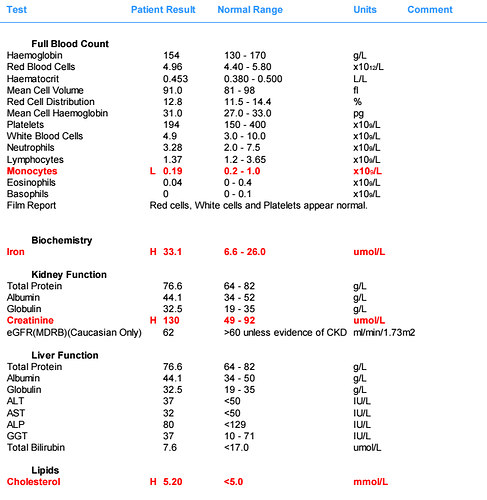 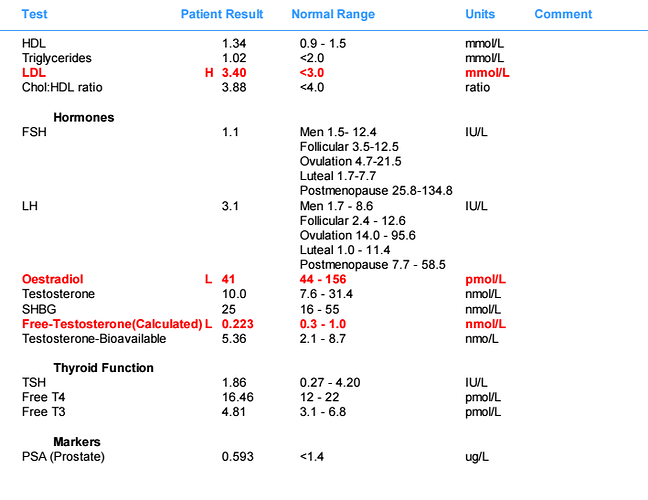 I also have some liver concerns but I can bring these up with my doctor.

Generally, I feel tired a lot, it’s difficult to get through the day sometimes because I feel exhausted despite good sleep and nutrition.

My main question is, should I go for a second PCT, or should I wait another 4 weeks and test again?

What is your baseline? Did you get bloodwork done before B&C? What are your expectations? Generally two years on is a permanent thing. Why stop now?

Cholesterol is poor especially when comparing HDL to LDL.

Everything else looks OK apart from the obvious hormone issue’s.

Energy issues are caused by low T which you currently have - 10nmol comes out at around 300ng/dl iirc.

estrogen being low makes sense consider Testosterone is low - as test increase so does estrogen.

How did you feel during PCT?

Your best option at this stage may well be to just leave everything alone and give your body sometime to adjust on its own and test again in another month or so. Hopefully things will improve but if not you may have to consider the TRT route for life.

These Labs are the same as the ones i see here in the UK - are you UK based?

KountKoma I unfortunately don’t have pre-cycle numbers, but I definitely had more energy and libido than I do now, which is next to nothing. I am stopping now because I want to be fertile and I have basically settled down into a place where taking AAS is not a priority for me anymore.

pex86, my cholesterol was even worse a few months ago, I am hoping that it slowly improves over this year.

During PCT I had more energy, but my libido was completely shot (I believe this is an expected side effect of this PCT) and I was quite emotional.

I am in the UK yeah.

Clomid could have certainly caused the issues you described during PCT.

If you were to try anything else then maybe HCG mono therapy would be the next logical step.

Time is probably going to be the main thing here. Hopefully your body will slowly get used to being natural again but it may well take a while. I probably wouldn’t do anything else at this stage, wait another month or so then retest and include fertility.

It can be hard getting the support that you need in the UK with this kind of thing but if you can build a good relationship with your GP you should be able to get all the tests that you need.

During your time B&C’ing, where you using HCG and adex etc throughout?

I was using aromasin throughout, very little HCG unfortunately.

I was using aromasin throughout, very little HCG unfortunately.

Well, 2 years shut down without HCG is very harsh so things aren’t actually looking that bad for you considering.

It might be worth doing HCG monotherapy now. If you want to i would do 250iu HCG every other day for 6 weeks then stop for 4 weeks and retest everything including fertility.

HCG should make you feel better quite quickly, increasing both testosterone and also estrogen, unless testes are too damaged to perform.

Are you familiar with how to use/store HCG?

As it is holiday season you should be aware that you cannot really travel with HCG. If you have anything like a two week break abroad planned this could be problematic.

Not planning on going abroad, so I can safely store it.

I am thinking about doing 3 weeks of HCG and followed by a second PCT. HCG will shut me down right, so I would need Nolva/Clomid afterwards.

But then like you say, my numbers might not be so bad considering my time on. So do you think I should see what my numbers are in another months time?

HCG will surpress LH yes but my main concern is that you haven’t been using HCG for all this time.

I had it explained to me that the pituitary is like a petrol engine - it starts back up very quickly, but the testes are more like an old fashioned diesel engine and may take a while to get going after being shut down. Your testes haven’t done anything for 2 years…

If you want to do something then i would do the HCG mono that i suggested above for 6 weeks then get everything tested again after a 4 week break.

have a read of this mate