Hello CT I know BW stuff is not your preferred domain but curious if you train athletes/regular joes with advanced calisthenics and see any use in programming for strength/physique (and if so how?)

This guy below for instance is very impressive physique and strength wise. Do you think reaching this development would have been quicker with weights? Are bodyweight displays of strength like levers and one arm chins more skill biased than freeweights? 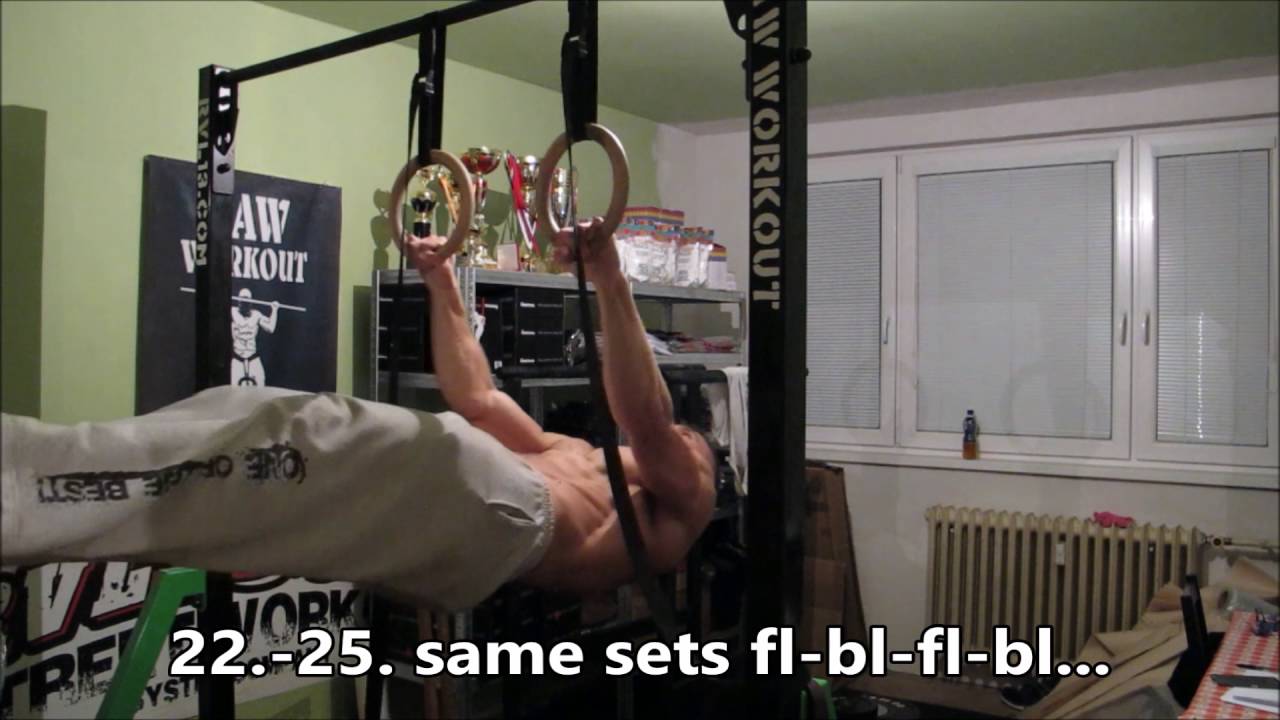 I wonder if with your and other advanced weightlfiters switching to doing these impresisve (and fun) moves would be easier (and vice versa), carryover?

Thanks for any thoughts

Not this question again…

Dude you got to quit comparing yourself to others

Wow it seems that everyone of this guys posts is in the Christian thibaudeau forum.

Could you do the layer system, but with rings instead?

Nothing to do with “comparing to other people”. All about maximizing self, potential, and also enjoying certain training styles (and picking the brain of masters).

Yes I only post on CT cause frankly his stuff rocks, has given me results (been following his work for 10 yrs) and he’s adaptive/brilliant, pragmatic, and sane (more can be said of other “bodybuilders”/coaches or even other subforums here).

Besides he says he’s all about using new training tools, fixing problems, and trying new ways of training.

I don’t see why advanced bodyweight (weighted calisthenics, ringwork) is a taboo q to ask, especially as many old timers/physical culturalists reap mass benefits from this on top of weight lifting/“bodybuliding” work.

And he trains athletes from 28+ sports…MMA, wrestlers, field atheltse etc…how could moving your body through space not be helpful?

I’m not asking CT on why not just use light band pump work, or ART, or yoga stretching to MAXIMIZE GAINS lol…because it probably wont’ work and I don’t enoy it. But weighted bodyweight/ring work has produced amazin gains for me so I try to get some insight from the master

But I’m reading the air here, and CT seems annoyed so of course he can choose not to respond, if so I’ll stop asking, for a year or two at least until CT reviists gymnastics lol

I’ll stop asking, for a year or two at least until CT reviists gymnastics lol

That wont happen. They messed up my shoulder and elbow and are a big part of why I can’t press heavy anymore

*and lets be honest here, of course you look for evidence of what works in the real world. then you tweak to your own genetics/training preferences. when it comes to physique stuff like drugs and lies (from fitness promoters who use roids but claim natural) further confound the picture.

we like natural strength, low body fat/solid muscularity, it’s a naturally aesthetic/beautiful thing (i think ct’s co-author paul even wrote something about that recently). and if you look at those who have superb calisthenic strength (provided they eat, and are not prepubesecent teens), by almost definition they will have great looking phsyiques (if not jacked, then definitely streamliend/lean) and is attractive to 100% of women and 99% of men (minus the 1% who are all about the bear mode look). the same cant be said for pure weightlifters (i know diet is huge…pls i get it this is just example does

so it’s vanity, ego (instead showboating your steroid pumps arms now ur showboating inhuman moves through space), not to mention fun and provides variety (long term moving body through space combined with resistance training barbell seems to be the most rewarding and motivating, and limit injuries).

so it’s applicable to wide spectrum of fitness enthusiasts

I get all of that Sigil. I’m not disputing the visual evidence. What I’m saying is that it’s a form of training that I do not use (I did some of it for 5 months in a 25 years of training “career”) either with me or my clients. I do not discuss training style of methods that I do not have mastered, i feel that it is intellectually dishonest to do so. Now, guys can discuss them but I can’t because I’m seen as an “expert” and whatever I say will either be taken as Gospel or misinterpreted.

I do not know enough about gymnastics training to talk about it and post theories about it. That’s why I do not want to discuss them and since this is a my coaching forum they don’t have their place. It was fine to ask about them but once I tell someone that it’s not an area of expertise and that I do not wish to discuss it then it should be left off of the board meant to talk about my ideas and concepts.

k thanks got it appreciated

With just the information to hand he looks like a child gymnast turned bodybuilder. The type of moves he’s capable of support that.

You’ve presented some loaded questions because the genetically gifted at the lowest levels will progress faster than than their peers (we usually look to the elite at their peak, not on how fast they outstrip their competition as kids).

The physically genetically elite will gain skills faster (it’s the ‘kid chosen last for ball dies first in a slasher flick’ rule of genetics which I just made up), so they’ll accomplish more in less time and get to the point where they get paid for it faster, so they can practice more.

Also, barbell training trumps advanced body weight training for hypertrophy. Being advanced, it requires extensive joint prep. Unsexy bread and butter calisthenics is a great companion to barbell work (especially for the sedentary beginner, there are myriad benefits to doing both concurrently), but the broader physical culture split apart decades ago for good reason.

Those moves could be built up to within a year or two with proper training. But ignoring the extremely fancy, skill intensive stuff, I’m not entirely sold on the premise that LOADED bread and butter bodyweight moves are inferior to barbelll (for upper body)

Weighted dips, weighted pushups, weighted chins/row variations, deep hand stand pushups (eventually with weight vest) can be progressed well, and seem to produce hormonal qualities (I might be making this up, but I’ve exerpeinced it) that make fat gain more difficult, integrates the body, improves athleticism, etc in addition to straightup hypertrophy

This is the part you have to understand. Weighted dips and chins mess a lot of people up, and advanced gymnastics move don’t look any easier on the joints. Gymnasts that have spent years doing these moves, especially ones that could do them at a light bw as children, will develop the joint integrity to handle it over years, decades possibly.

TRUE straight arm work takes years of prep. It’s very easy to fool oneself into thinking form is strict to get to the next progression when a fraction of an inch makes the difference between strict and sloppy.

Some of the leading guys over on Coach Sommer’s forum have written extensively about pushing to the next level before their joints and connective tissues were ready and ended up with injuries that robbed them of months of progress in the long run.

I see it even in people attempting high frequency pull ups: injuries start to creep in when form is anything less than impeccable.

If you aren’t convinced that barbell training is better for hypertrophy, ask yourself why ring work was phased out of use for the applications you proposed in your OP in the first place. It’s what I did.

PERSONALLY straight-arm bodyweight work killed my elbows. So much so that I couldn’t fully straighten my right arm for about 2 years; which led to a compensatory mechanism when bench pressing which led to a shoulder problem that is still with me.

And I applied a pretty gradual progression.

Of course Sigil you are on the light side, so your body can probably handle them but most people who decide to start these movements when they are adults might very well have a problem.

CT I know that this isn’t your area but could you share with us what kind of progression you use?

Mostly I wonder what kind of progression you use in holds (front, back, planche) ?
How many sets and time hold?

CT I know that this isn’t your area but could you share with us what kind of progression you use?

Mostly I wonder what kind of progression you use in holds (front, back, planche) ?
How many sets and time hold?

As I mentioned in my answer to Sigil, I do not use advanced bodyweight exercises in my program or that of my clients. So I do not have any progression to share. Sorry

You wrote that you use

[quote=“Christian_Thibaudeau, post:16, topic:222533”]
gradual progression
[/quote] so I wos thinking that you have some ore You use some in the past.

so I wos thinking that you have some ore You use some in the past.

I used them for 5-6 months. But really it was more learning that training. I never reached a level where I was using these as “training exercises” I was simply trying to master them.

Thank you for response