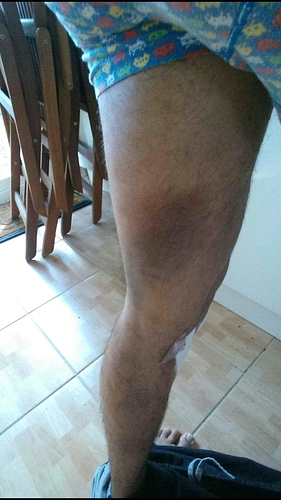 Anyone had to deal with Anterior Cruciate Ligament reconstruction?

My operated leg is now half the size of my good leg and has a lot of fluid and inflammation. Consultants/physio say I’m good for cycling - currently at 17 days after surgery. I seem to be doing OK, I’m considerably more mobile than my brother and sister were after having this same operation. Perhaps our genes aren’t quite as perfect as we had previously assumed.

Any major do’s and don’ts?

It came with this stylish bruise - which actually got a lot bigger and darker since I took that photo. Sorry, I can’t delete it - I didn’t realise how big the photo was.