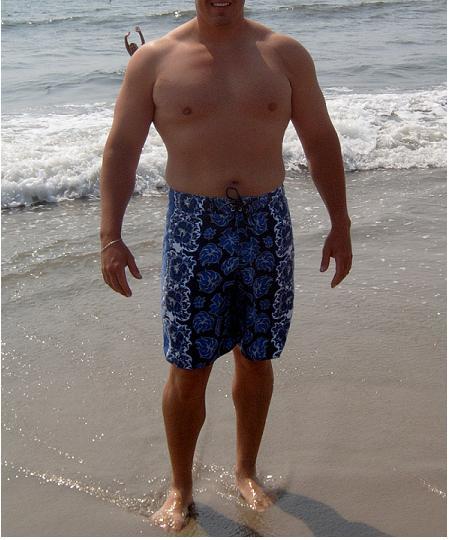 OK. So I’m about to start on a higher freqency workout. I’ve been doing many variations of the each-bodypart-once-a-week routine for the past 10 years, or so. But now it’s time to change things up, thanks to CW.

Here is a bit about where I am and where I want to go in the next 6+ months. Please excuse the quality of the pic above, but I thought I should add a picture. It’s all that I could find at the moment.

Current Plan:
Weights 4x per week
Cardio 1x per week (to be honest)
Eat whatever

What’s a good twice a week workout? What has been the experience of anyone on either of the two workout programs noted in the title above?

I don’t know much about it so hopefully others can chime in, but the 20 rep squat routine sounded like a great 2x a week program. If derek reads this, I know he has alot of info about this program.

Otherwise, if you only want to workout 2x a week, just do a good full body workout on each day and you will be ok.

Don’t overthink it. Just lift when you can. Do your cardio. Eat well. Have fun.
As far as thoose particular 2 workouts, Waterbury would be a better option for my liking. But check out that 20 squat routine. I hope someone else can offer more info or a link

Thanks sasquatch.
One correction I’d like to make though. I’m still looking to workout 3-4x per week. But, want to try to hit each body part twice per week.

Again, I prefer Waterbury and TBT, but that’s just because they fit my needs at the time
I will throw this out there though.

Both are demanding and maybe not the way to go when trying to drop 20 lbs. as well.
But, if you modify them a bit, especially the rest time and total volume of sets as you are losing, the template is great.

And you actually get to hit all bodyparts at least twice, most 3x.

I considered myself to be at least at an intermediate lifter before comming here to T-Nation, but I learned more here than anywhere else.

I thought at first that the ABBH program was more for a begginer, but I tried it anyway and got great results with it.

Right now I’m trying CT’s OVT program, then I’ll use a lower volume routine for a couple of weeks, and then I might go back to the Waterbury Method. Hopefully by that time I’ll be better prepared for it.

I’d recomend the ABBH program to anyone. It’s very simple to follow, and there have been more possitive results from that routine than any other I’ve heard about on this site.

Try it out and see what it does for you. Follow it to the ‘T’, then switch the paramaters like it says in the ABBH II program, and move on to ABBH II.

A good twice a week routine could be Chad’s “Next Big 3” program.

In response to a question in Chad’s “10X3 for Fat Loss” thread, Chad mentioned a good long term fat loss plan. Here is what he said:

"A long term fat loss plan would look like this:

After reading about his 10X3 for Fat Loss article, I realy wanted to try it, but I’m currently going for mass. I’ll try that one when I’m ready to lose some fat, while using the “T-Dawg 2.0” or “Velocity” diets.

Edit: I forgot to mention that there is a great spreadsheet that Sterno made for everyone.