So here I am. I’m planning on keeping this log so that in 2 years time I can look back and laugh at how bad I had let myself slip.

Been training on-and-off for 2 years, but if you lump together the ‘on’ it’s probably less than a year.

Nowhere near what most of the monsters on this site are lifting (well, maybe for warm-up), but not bad for a lard-arse with only one patella.

I seem to have lost my strength since, but now I’m determined to see my abs for the first time since . . . well, since I was 15, I think.

Good luck matey! sounds like you’ve got some servious work to do. What’s your program look like?

Cheers mate. At the moment, my programme consists of 3 days full-body (4x 4-6) alternated with 3 days of cardio (jogging, eliptical, etc.). The gym I’ve joined temporarily (we’re staying with my folks since I lost my job) is a bit crappy - mostly machines with some dumbbells (up to 45kg) and a smith machine, but it’s enough to start me off for chopping off the lard! 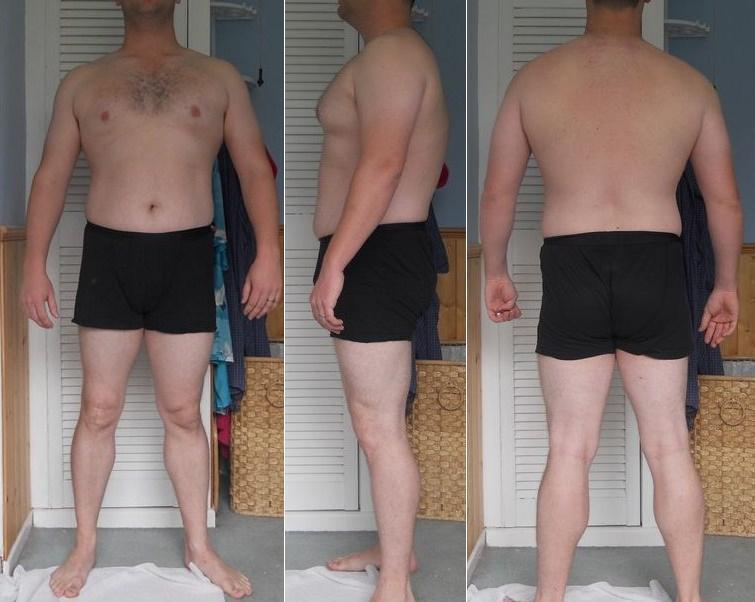 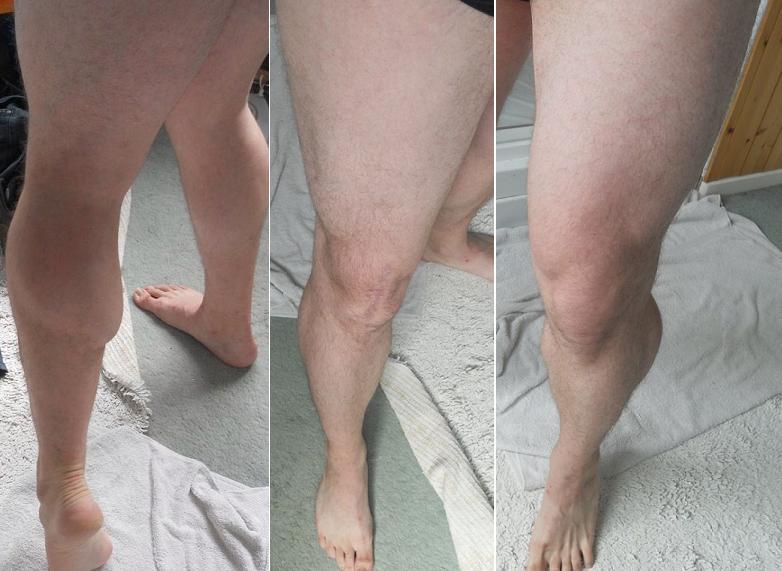 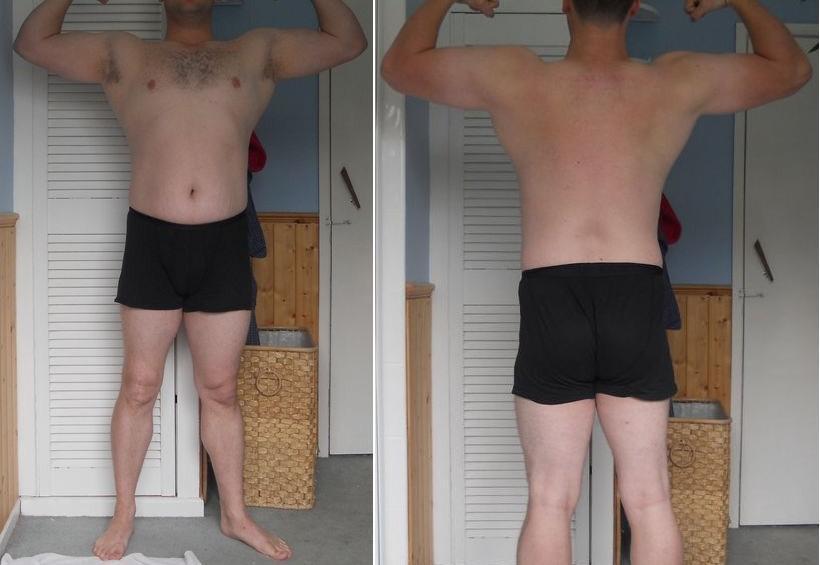 “Flexed”. I tried a lat spread but it just looked like I was trying to hold my love-handles in! lol

Still losing weight, slowly but surely. I’m now floating around in the Irish Sea (I got some off-shore work for a month or two) but luckily the ship does have a small multigym. Only has DBs to 20kg though.

Training legs with DBs is a no-no unfortunately, as it’s rather hard to balance with the movement of the vessel as I found out myself!

There was no room for any supplements in the luggage, so I’m basing my diet on gasp! REAL FOOD! They generally have some form of lean meat available and a pretty good salad bar. Also as much milk, yoghurt, water etc. as any normal human could want.

Hitting the ship’s gym 5 days a week still, going for a 5-day split aiming for 4x12, increasing weight and dropping reps until it gets back to 4x12. Description sounds crap, but it’s fairly simple!

Arm size has definitely increased, blubber level is dropping slowly but surely and waist size is dropping too. Hoping it will be a nice surprise for the wife when I get home at the end of the month

Sailing for Norway at the moment. Haven’t been able to train for 3 days now, thanks to the shit weather. Because the ship I’m on is flat-bottomed, it tends to roll a hell of a lot with the swell - we hit 20 degrees either side of vertical last night.

Weird. Got back home 2 days ago and weighed myself for the first time in ages. There’s been a definite change in bodyfat (waist / gut is smaller for one) but I’m now at 221 Ibs. Strength has increased and there’s seems a small amount of extra muscle, but certainly not that much. Will have to get some photos to compare side-by-side to see if there really is any change, or whether it’s my mind playing tricks.

On a lighter note, tried Surge Workout Fuel for the first time yesterday. For the first 20 minutes of the workout, I started thinking “it’s nothing special”. Then it kicked in and I felt like I could keep going forever! Now I have DOMS in pretty much every muscle group, but it feels gooooooooood!

Definitely hooked on this stuff, and luckily it doesn’t interfere with the SSRI (fluoxetine) I’m taking.

Received my shipment of Z-12 and HOT-ROX Extreme, only to find they both have warnings against use with anti-depressants. Hopefully my post / email to the mods will get an answer, but if it’s negative I guess I’ll have to eBay them

OK, I have no idea what happened to my last post!

Now I’m working in Kuwait, in the oil fields. I did a 6-month stint in Abu Dhabi but I got majorly shafted by the Arabic employers. Was working in the middle of nowhere - no gym, nothing.

Now I’ve got my own place and, having changed to a less-grains/carbs approach I’ve dropped 13Ib in the last 4 weeks through diet alone. It’s payday this month as well, so I’ll be able to join up at the gym again

1st night at the gym tonight! Just changed to a 3am-11am work shift which has knocked me about a bit (shift change was due to the temperaturs here - in summer it can reach 55C (131F) or more during the daytime).

I’m going with a simple 5x5 routine (Stronglifts) with a few added bits to bring up my lagging leg.

All felt pretty good; squat and bench felt heavy at first, but by the 3rd set they felt a lot easier.

Weigh-in and tape measure on Thursday - at last check I was down 14.5Ib and 1.5" off my waist [measured around the middle / navel]

Realised I haven’t updated (keeps me accountable) in a while. Weight fluctuated a bit, but now 19Ib down, lifts still increasing slowly; dialling them back slightly for this cycle of 5/3/1 to focus on form, especially as my bad leg is struggling.

:edit: Right, I’ll try again - caliper and tape arrived today. Sitting a 210Ib and 22%BF, which is nice seeing as my leanest ever was something around 18%.

So here’s the updated pics. For a year’s progress, that’s physically abysmal.

However, in the space of a year I’ve changed job 4 times, beaten alcohol dependency, beaten depression and saved my marriage. I’ll take that any day of the week. This year is onwards and upwards.

Last night session (start of a new 5/3/1 cycle, have dialled back the weights on everything to make sure my form is ok)

(changed to Ib from kg)

The travels and challenges in life are reason alone to tagalong

Is it the site or Chrome, but half my posts simply disappear into the ether?!

WARNING: WALL OF TEXT
About my leg;

In 2002 I was involved in an RTA and the egine of the car I was driving (a Rover 214i rust-bucket) came through the dashboard, shattering my patella into 5 pieces, nudging it 3" up my leg and effectively disconnecting most of the ligaments. I was kept in a morphine-induced semi-concious state for 5 days before they operated.
The first open surgery saw my kneecap put back together like a (bad) jigsaw and then tied together in a metal wire basket, along with various other bits being reattached. Sadly, it didn’t work and nothing could stop the cartilage on the patella from degrading and sometimes coming off in chunks.
4 years of not walking properly, 2 open surgeries and 4 arthroscopies later, I won the court case (RTA wasn’t my fault) and went to see a private specialist. 1 more arthroscopy and the decision was made to undertake a complete patellectomy on my right knee joint; basically that little sucker was popped out of there and the tendon stitched so that it runs smoothly in the femoral groove. [I still have a video of the inside of my patella suring the arthroscopy - keep meaning to put it on you-tube!]

A study (if anyone wants the link just ask; linking to it seems to make my post disappear) shows that on average the quadricep strength after a complete patellectomy reduces by 49%, which explains my small right leg, mis-matched back muscles and slight S-curve to my spine.

I never lifted before the accident, but my best squat since was 330Ib. This will get to 400, and then higher.