Hi All, I have been having issues with ed, no libido, genital numbness for the last 5 years. I was wondering if someone could help be with my test result. Is it normal? Does it indicate anything?

Hi All, I have been having issues with ed, no libido, genital numbness for the last 5 years.

Your low DHT and E2 are the smoking guns for libido, ED, dry eyes, numb genitals and lack of sweating.

yes but what can be causing them? I never took steroids? finasteride? accutane? ssris? trt?

What would cause this to happen to healthy 21 year old basically overnight?

What would cause this to happen to healthy 21 year old basically overnight?

Where Do I Go From Here? Desperate Cry for Help

In the summer of 2016 I decided to go on a severe calorie restriction diet. I was also overtraining cardio and stopped weight lifting completely. I was eating mostly vegetables and went from 77kg down to 61kg in about 1 month. I noticed lowered libido in sept/oct but kept going because I knew the link between dieting and libido and thought it would resolve.

Why are you playing dumb? This seems to be a reoccurring thing where you acknowledge the problem and then six months later you’re back here asking what’s causing my symptoms and how did this happen.

I am trying to do things naturally, where I live its almost impossible to be on trt, and to be honest I wan’t to avoid it.

I dealt with the parasite I had, Im negative for autoimmune diseases.

Was under the impression this test didn’t mean much. Have you done the 4-point cortisol test that measures at different times of the day?

I think blood cortisol is useless. First it came back out of range, then normal.

I just handed in a 7 point cortisol test so I am interested to see the results. I was severely undereating, overtraining and drank 4 or 5 cups of black coffee everyday for about 6 months. I am sure adrenal fatigue is a part of my puzzle.

I think the antifungal cream played a part in your crash.

Let me help you out with this one. It’s most likely genetics.

People always look for reason they’re not 2 standard deviations above the mean for Test, GH, etc…
The reason is simple. This stuff is approximately normally distributed, so half the population is going to be below average and a significant fraction of those people is going to be very, very subpar.

There’s no special reason or anything like that. I think people just can’t deal with the idea that they’re born deficient. But that’s the truth. Some people are born with an IQ above 130, some with an IQ below 70 (the same number of people, actually).

We just can’t accept that when it comes to the hormone that we think makes a man more than anything else, we’re born the equivalent of mentally retarded.

We just can’t accept that when it comes to the hormone that we think makes a man more than anything else, we’re born the equivalent of mentally retarded.

[image] [image] A couple of those female rowers and swimmers are pretty “up” there. 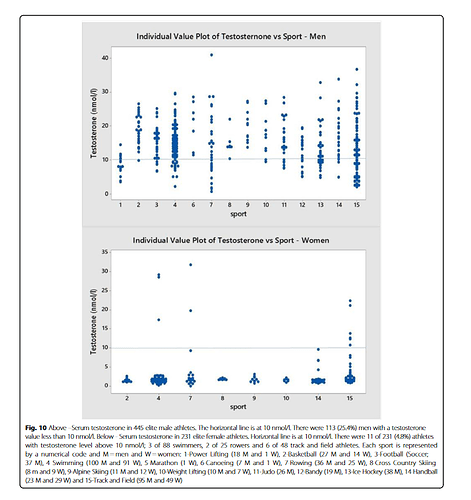 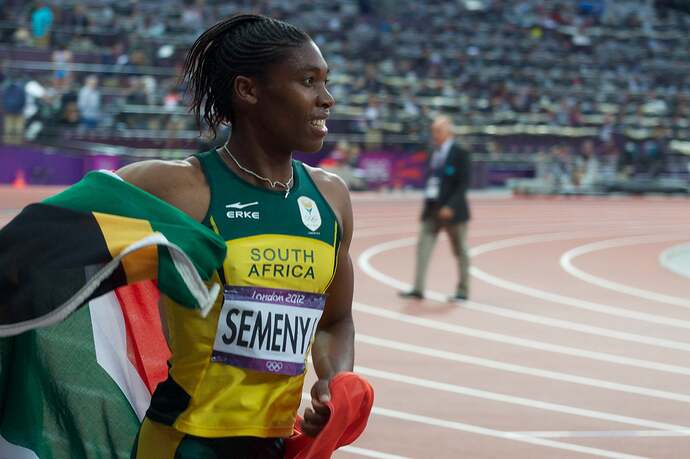 The complicated truth about testosterone’s effect on athletic performance

The debate over whether to allow female athletes with high testosterone to compete with other women has been heated, but not backed by a lot of science. That's because there simply isn't much out there, though that's not to say we can't draw some...

Complicating all of this is the fact that elite athletes’ testosterone levels vary quite a lot. One analysis found that 25 percent of elite male athletes have testosterone levels below what the International Association of Athletics Federations consider the lower limit for men. What’s more, it wasn’t the athletes in less strength- or speed-oriented sports. Some of the events with the most men below the limit were powerlifting, rowing, track and field, ice hockey, and rowing. Basketball players and alpine skiers had some of the highest levels. That all seems to imply, at least to some researchers, that high testosterone isn’t a universal performance booster.

Holt agrees. “It strikes me as far too simplistic to say that the only difference between men and women is their testosterone levels.” If you’re going to look at performance differences, he says, you also have to look at sociological ones. There are almost certainly biological differences that mean men will always outperform women to some degree, but he points out that teenage girls are much less likely to compete in sports at school than boys and are given generally worse facilities. Male athletes are paid much better than female ones on the whole. Holt says these and other factors mean “there are a whole load of sociological reasons that may also drive men to coach and be driven to achieve at a high level beyond testosterone.”

Besides, the idea that a naturally occurring variation in some women’s bodies is somehow unfair doesn’t mesh with how much we exalt male athletes with unusual abilities. Michael Phelps’ muscles produce half the lactic acid of a normal person, enabling him to push himself for much longer without fatigue. Finnish cross-country skier Eero Mäntyranta has an inherited mutation that increases his red blood cells’ oxygen-carrying capacity by 25 to 50 percent, which is the genetic equivalent of doping. Those men were celebrated, not pillaried.

Sports are inherently unfair, and while there have to be some regulations to account for true cheating, it seems like a double standard to demonize women for the same kind of natural advantages that we appreciate in men. And to simplify the entire debate down to a single (albeit important) hormone ignores a great deal of biology and sociology, says Holt. “We should celebrate those biological differences.”

This last part I don’t buy…clean sports. Natural advantage OK but chemical assistance is BAD? Some people are true freaks and why shouldn’t us lesser mortals use any and all tools available to level the playing field? Where’s the true fairness?