Any thoughts from the T Nation community?

IF Ahmed still bombs and Rodgers hits a couple more lifts… a much better finish. I just can’t help but think she’s limited in what she can add to her frame at 69. Does she stay there as the doll of weightlifting a la Lydia Valentin or does she consider 75 to add muscle?

Maurus looks like a stud, CJ looked mortal after all.

Couple of highlights for US, couple of donwers.

Maurus looks like a stud indeed. Great clean & jerk. I wonder if his future is at 85kg; he still looks so lanky for a really good WL’er.

CJ had a strong performance in the snatch; bummer that he bombed out on the squat jerk. I still think switching is a good move for him long-term, though. His split jerk always was a little on the messy side, and I think he actually looks pretty smooth in the squat jerk. So young, still loads of potential there.

Robles winning the gold - I mean, it’s hard to argue with three golds, right? Good for her.

Mattie medaled across the board and should be happy, but I like what she said - bummed because her best lifts would’ve given her a shot at gold and she was a few kilos off in both lifts. I see what you’re saying that her frame might be a little better at 75 - is she any taller than Lidia? Just saying, Lidia is a good looking woman, I think Mattie would still look fine at 75 (sadly for the single guys out there, she is taken!) but it depends if she feels like she’d carry the weight well and get strong enough.

So many big lifts from people all over the world.

I honestly think Lasha will be the first person to Snatch 500lb and C&J 600lb in competition. He doesn’t even look like he struggles with those massive weights.

But my favorite new lifter is definitely Meso Hassona. Dude looks sorta like a regular guy but next thing you know he can C&J 220kg/485lb lol.

The dude from Chile in the 85kg was also a beast. Made those C&J look so easy.

What I really love about watching is seeing the difference in technique from the different countries and how different some of the lifters in the same class look. Some guys upper bodies look like a regular person (even though they are strong as fuck) while others looks super jacked.

I agree with @ActivitiesGuy though about CJ. His squat jerk actually seems more suited for his body. He’s young though, he’ll get better.

I’m looking forward to the 2020 and 2024 and 2028 Olympics. I have a feeling that the USA will finally win gold with the young superstar lifters we have coming up.

I agree with @ActivitiesGuy though about CJ. His squat jerk actually seems more suited for his body. He’s young though, he’ll get better.

Ok, so… I’ll admit that CJ’s coaches know more than me. But, if you look at people moving big weights, what percentage of them are using power jerks or squat jerks? Lasha (or any of the supers) didn’t need to change technique to jerk 550+. I know it’s a comparison of supers to a 69, but it seems like a ton more can go wrong in the squat jerk. Not to mention an overhead squat of 400# seems daunting.

I think people get in a rut and think there is a path that will solve problems. I’m more of a “stick with ya girl that brought you to the dance” type of guy.

I definitely agree that more can go wrong with the squat jerk. Who knows maybe he’ll go back to a regular split jerk.

I have the mobility to squat jerk, I’ve tried it. It’s fun for light weight. But I’ll always split jerk. You are basically having to squat twice lol. After a heavy clean, last thing I want to do is squat again lol. Split jerk seems more natural for most people.

I think power jerk is good if your knees are a bit more beat up, but you need pretty good shoulder mobility and stability to power jerk and actually hold it.

Have you seen that video of Ilya squat jerking? He had no issues with it at all lol.

Watch her lifts and tell me she didn’t have another 10-20 Kg between the two lifts.

She was just playing with those other girls.
And it was a really nice field at 58.
Loved seeing Guerrero, the 37 year-old lifter from Ecuador,
damned if she didn’t almost medal.

Oh, and speaking of Kuo,
did anyone else notice that her total at 58 would have won Gold at 63 and 69!
When was the last time a lifter’s total would have also won the next two higher divisons in the Worlds or Olympics? eh?
exactly.
and she wasn’t being pushed. 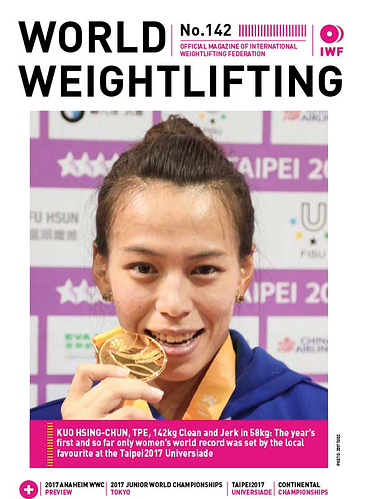