Today I lifted in the Irish Powerlifting Organisation’s Leinster champs (affiliated to the WPF - Single Ply, non-tested). It was an INCREDIBLY well run event, the atmosphere was awesome and I had an absolutely storming meet. This is gonna be a long post, so here’s the video of my lifts: 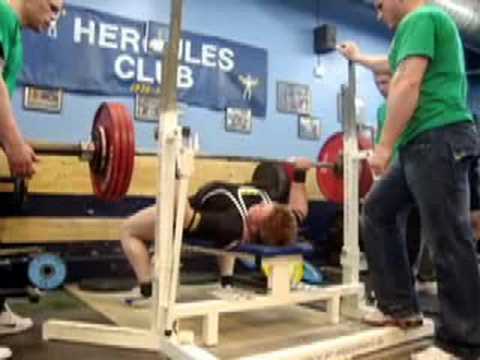 Anyway, if you wanna read on, here’s my story of the day…

The squat warm ups today were a bit strange. They didn’t feel all that solid and some of them felt heavy, but the bar speed was very good across all the reps. The rack I was squatting out of was set up a bit weird, one side was higher than the other, which probably caused the problem.

I took 245kg (my current PR going into the comp) as my opener. I’d doubled this in training, but only really took it to parallel so I was confident I’d stick it in the hole without a problem. It was my first time using a monolift at this event. I usually jump into the bar with my chest to get psyched up before lifts, I did this today and nearly took my head off on the cross bar of the mono. You can see it in the vid, my head hops off it and the back spotter cracks a little smile. Anyway, I sunk it in and killed it.

Jumped to 260kg for a huge 15kg PR on my second. It had been the goal going into the meet and I had my doubts about jumping straight to it. I asked Ger (my training partner) and he said go for it, so I trusted his judgment and it came up real easy.

With that in the bag anything else was going to be a bonus so I called for 272.5kg (600lb) on my 3rd. Got really psyched for it and it nearly stapled me to the floor when I took it out. I’d been having trouble all day with getting it out of the monolift, I kept getting pulled forward. I managed to control 245 and 260, but 272.5 pulled me back into the rack. I kept my position, regrouped and popped it out strong then. Took it down into the hole and came out with it nice and smoothly for a HUGE 27.5kg (60lb) PR.

Onto the squats and my raw warm ups felt really good. I was on a total high from my squats and coulda hit a raw PR today. Then I got into my shirt and things started to go down hill… The 150, 160 and 170kg warm ups were sluggish. I wasn’t near tight enough on them and my head was throbbing from where I hit the mono on my opening squat.

My first attempt with 177.5kg shoulda been real easy (I’d done 180 3x1 in the gym with no problem at all) but my stupid right arm decided to be a bitch and make the lockout hard.

Coming into my second attempt I knew I could take a chance and go straight to 190kg (the goal for the day) since I had a bit of a bumper coming out of the squats to secure the 700kg total. I made a complete balls of my first attempt with 190. I touched too low, was soft as hell and got the bar back way too early… I Got it past mid way, and died.

I retook it for my third, jacked down the shirt and tightened everything up. My lat cramped at the bottom but I threw everything I could into it, got it to mid way again, slight stall (probs a dip too tbh) but grinded it out from there to lockout for a 10kg PR.

I was actually looking at the WPF world records a while ago and both my opener and third attempts broke the existing record of 175kg, but I won’t be credited with it since there were no international judges there. Sucks, but that’s life!! It was also good enough to break the WDFPF world record of 185.5kg which I’ve been chasing for quite some time.

My raw deadlift openers again felt grand, but once I got the suit on things started to slow down. I dropped my opener to 237.5kg and pulled it easily to get the 700kg total out of the way so I could have two attempts to go after PR’s. I haven’t hit a PR deadlift in comp since November '07 (250kg).

My next attempt was to push my total further up, so I jumped to 245kg and again pulled it strongly. This left me with 707.5kg.

After some consultation it was either 252.5 or 257.5 to take me to 715 or 720. I choose to go to 252.5 cos I thought I’d pull it and FINALLY hit a deadlift PR too. I tore my hamstring down at my knee about 12 weeks ago and have been working around it ever since so I’ve got no real deadlift training in since then. This came into play on my third attempt. The bar got to my knees and my left knee snapped in pretty badly (watch for it in the vid) and I missed the lift. I did no damage to myself, but I can’t help but think if I was healthy I woulda pulled it easily.

Some other highlights from the day;

-My training partner Ger hitting his first 3x bodyweight squat (225kg @ 75), and also him barely missing a 250kg pull right at the top (he’d locked it out but his grip gave in before he got the down command)

To wrap this up, I have to thank all the spotters, loaders and referee’s for their fantastic work all thru the day. It’s all too often they don’t get the credit they deserve, but without them none of this would have been possible.

Also, I have to thank Ger for being an frickin awesome training partner, everyone I bench with on Sunday morning and train with thru out the week, and Graham for his tireless work today in helping me get ready for my lifts. The poor guy’s hands are in BITS from all the wrap rolling. And last but not least, my fantastic girlfriend for putting up with all the shit that comes with this, being there to support me and also for providing the videos which you’ve probably watched by now.

I could probably say anything I want at this stage cos I don’t think anyone will have read this far. But if you have, kudos!!!

Congratualtions mate! Fucking awesome stuff! Thanks for taking the time to write it all up.

Great job Hanley. Those squats looked really strong. Did you like using the monolift? That walking out stuff is for the birds, isn’t it?

[quote]novaeer wrote:
Great job Hanley. Those squats looked really strong. Did you like using the monolift? That walking out stuff is for the birds, isn’t it? ;-)[/quote]

I have to say, despite my problems with getting set up, I did love the mono!

Ridiculous I never would have thought you would have done this well, you are definitely a competetive lifter.

I am less of a man then you, now come back to 90kg and I’ll show you strength

[quote]shizen wrote:
Ridiculous I never would have thought you would have done this well, you are definitely a competetive lifter. [/quote]

Really…?? Why’d you think that?

[quote]Power GnP wrote:
I am less of a man then you, now come back to 90kg and I’ll show you strength ;)[/quote]

[quote]Hanley wrote:
shizen wrote:
Ridiculous I never would have thought you would have done this well, you are definitely a competetive lifter.

Usually in competetion a lot of people get nervous ext and don’t perform as well as they could. You did the opposite and did much better then a lot of people thought you were going to do at this meet.

Great work! I’ve been away and just saw this thread.

How did the mono compare to walking out the squat? Did you have much practice on it?

Finally is this the fed for you now?

How did the mono compare to walking out the squat? Did you have much practice on it?

Finally is this the fed for you now?[/quote]

My first run with the mono was my opening attempt!! So no practice. I did learn pretty quickly that your feet need to be much further forward than you think in order to prevent as nasty face plant.

WDFPF world’s are in November in the US. WPF’s in Vienna in November too, I won’t be going to either unfortunately. I’ve a good 6 months to concentrate on training for next year’s national champs tho.

And no, I’ll continue to do IPO comps, but I still want that national jr total record at 100kg in the IDFPA, it stands at 750kg. The overall standard in the IPO seems to be a bit higher (to be expected in a non-tested fed tbh) but I’m not too concerned about them having an “unfair” advantage. I just want to lift with strong guys!!

I’m looking at the WPF world champs '09 in Vegas out of the corner of my eye tbh.

Really…?? Why’d you think that?

Usually in competetion a lot of people get nervous ext and don’t perform as well as they could. You did the opposite and did much better then a lot of people thought you were going to do at this meet. [/quote]

Only just saw this now… Thanks!!

My squat always seem to be much better in meet’s than training. Bench is fairly consistent, I can expect about 10kg over my best gym lifts. And my deadlift just sucks balls in comp, but I’m workin hard on fixing that now. I should be in a position to string together a 200kg bench and 272.5kg pull at the end of the year, in the gym at least.