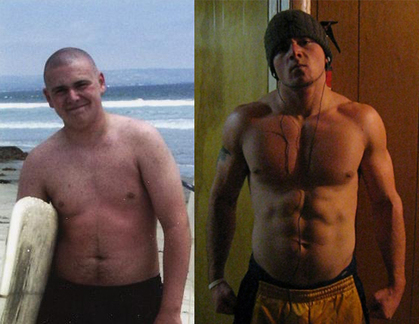 ya I weigh exactly the same as I did then. hmm… 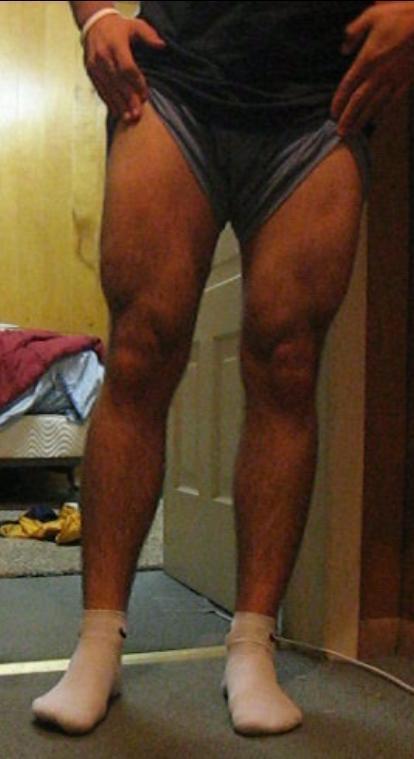 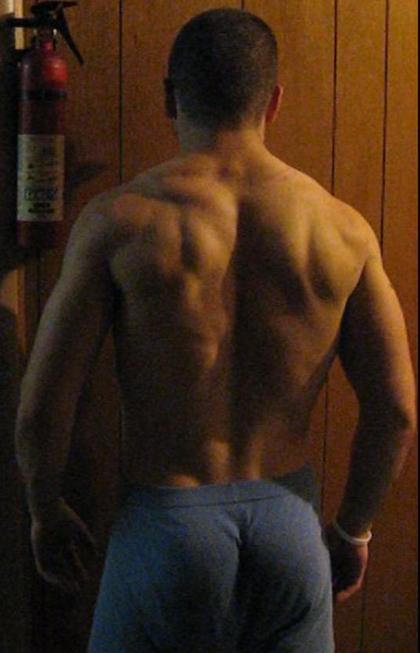 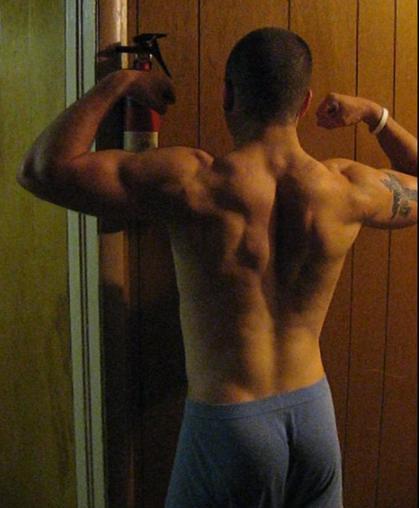 Maybe your just not cut out for bodybuilding…

Just kidding, great improvement! Tell us how you did it!

I disagree with ur current 3.0 rating, great job, you look terrible in that before pic hah, give us details on those 2.5 years.

posted a bit called “got as far as I could on my own” that explains how I got from a year ago to now, but before that point…

I got shot down by many a lady, and thought “well hot damn, if I get abs I’ll get the girls.” so I did the million situps, crunches, leg raises, and so on. lots of pain, lots of throwing up, but no abs. then I discovered (cue the angelic music) T-Nation.

I read, but didn’t speak up (first mistake). I did my squats, bench press, power cleans, pullups, and cardio. But I neglected the deadlift and was too embarrassed about the weight I used to do much barbell work.

so imagine a medium-fat late teenager using nothing but dumbbells, and with poor form. I still ate brownies and cookies, so that didn’t help much, but I lost some fat and gained some muscle.

Then I moved to college with a lifting buddy. He saw that I lost fat and got muscle (over what? 8 months?) and asked for some pointers during the summer. Once we moved in together at college, I practically became his coach. OK, now I have to know what the fuck I’m talking about.

That’s when I really started reading not only the articles here, but individual posts. I also started to stay away from the desert table after gaining a whopping 12 pounds in 3 weeks, little of which was muscle.

I ate tuna and chicken, and learned the importance of deadlifts, deep squats, front squats, and barbell work along with the dumbbell work. I favored chest workouts to back workouts, so I developed a posture problem. Again, ask T-Nation for help.

Spring came around, I got a summer job, and my roommate transferred to another college. I took this as an opportunity. I figured, I can’t have him to push me anymore, I have to do it on my own, and I did. With the help of T-Nation and the fine unofficial members who help out people like me.

I’m actually quite proud of what lifting has done for me. Not only has it changed my appearance, but I walk with confidence now, and I know it carries over into other areas and influences others as well.

For instance, a martial arts class I’m in, we separated into teams for the last week to do “team deathmatch,” if you will. My team not only won every match, regardless of who was on my team (several days = several different teams) but every time we played “VIP” (from Halo; hey, I go to a technological college

) I was unanimously voted VIP.

I know I’m not the only one who can make these changes, but it doesn’t stop me from being proud of myself. I also notice I have a shitload of energy now.

Not enough to qualify as having ADHD, but I’m much more willing to be active with friends, or bounce and sing with the song in the weight room when I’m the only one in there.

nothing wrong with being proud of that.

not bad. laggin biceps, legs, lats and id say triceps but its hard to tell from that pic.

why am i even mentioning whats lagging? im sure you know it already, meh well it is a rating afterall.

you have good trap and rhomboid development though

lats/legs are lagging for sure

you looked happier when you were fat

LOL, dude, great job! I only think your legs need some more work, but other than that you look great, keep it up.

ya I hate my legs.

and the lats may be lagging, but they’re better than 6-8 months ago. this isn’t my last time posting in this section of T-Nation, you’ll see bigger lats on me in the future.

as for my legs, after I’m finished with Thib’s 12 Weeks to War-Ready Guns, I’m gonna hit up one of the leg building programs on here. I know, “why not do both?” but the ones that I saw and liked had the arms moved around and separated on different days. (bi’s and chest, tri’s and back kind of thing) I’m into week 8 with it.

and I probably looked happier when I was fat because I probably had a little debbie snack on the way to the beach.

oh I’d like to add that no, I did not use any steroids to get where I’m at. my goal is to get as big as I can possibly get without steroids, then get a tattoo that says “yes, I’m all natural.” XD or maybe not…

Xander you should be very proud, the transformation you made is awesome!

What does a day look like in your diet?

I gave you a 10 for the pure transformation!

I gave you a 10 for the pure transformation!

I’d too like to know about your diet, supp’s and even your workout scheme.

[quote]aidyquinn wrote:
I gave you a 10 for the pure transformation!

So I guess you haven’t realized that this is “Rate my Physique” not rate my transformation.

You have established a very good base. As others have said you do have some lagging parts. At this point in time it isn’t totally necessary to focus solely on the lagging parts. Keep trying to build overall mass, but at some point you will have to address the weakpoints. Give a thought to spending a little extra time on the lagging parts but don’t start specializing on specific areas yet, just my opinion of course.

what is your height?

im guessing youre taller because you have less lat width which seems to be easier to obtain in shorter people.

incline hammer curls and lying cable curls to head will improve you biceps.

PM if you want any advice.