Hello,
As the title says I’m on my first month (200mg 2/month) and I really have some questions about what is happening.

First, I have became super hungry which sometimes isn’t a bad thing, but I can’t stop eating. It seems like I’m always hungry. Is this normal?

Second, the first couple days after my injection my little buddies (testicles) ache and feel like I’ve been kick in the nuts. Is that normal?

Any help would be greatly appreciated. I just want to make sure everything is fine and normal.

What is your current protocol? Any AI? I’m assuming no hcg?

A good starting place for you would be to inject 50 mg test twice per week, 250 iu’s hcg every other day and possibly 0.25 MG’s arimidex every other day (could vary depending on your estrogen labs or symptoms).

First listen to what Hostile had to say, he is spot on

(200mg 2/month) is not that much, but injecting that only twice a month means your trt levels spike very high, with all the bad side effects of using too much. If you were injecting 50 mg twice a week, your trt at its lowest would be much higher and at its highest much lower. You might not even need arimidex with that protocol. Depending on your age and body fat. You do need to do more blood work to know that.

As to hcg you need it if your boys are hurting. Maybe you do not care about having kids or small balls but pain is another story

I’ve been on TRT for 7 months and I’m constantly hungry. The good news is I’m not gaining any fat.

Your injection protocol sucks. You’ll never reap the benefits of TRT with that protocol. Follow Hostile’s advice sooner than later.

Thanks for all the input. I’m 28yo and weigh about 245lbs. I have not had any blood work since about 2 months ago. My T level was 140 and everything else was pretty spot on according to my Endo. I meet with my Endo next week for a follow-up and I’ll probably do the blood work then. My goal is to start feeling better mentally and then start working out to try and lose some weight and build up some.

You need to post your lab work with ranges. You’d be surprised what some docs think are good labs. As an example, E2 is critical to feeling good. We want to be close to 22. Some docs are ok with that number being 50!

My current protocol is just 200mg of test Cyp every 2 weeks. Nothing else. When I see my Endo next week i was going to ask if I could do like 100mg per week. I also don’t self inject yet, which I’m going to ask about. With the protocol I’m on I really don’t notice any changes in any way, besides aching balls and increased hunger.

100mg/week is better than 200mg every two weeks, but it’s still not ideal. You will always have peaks and valleys. Self injection is a must. Secondly, you need to start self injecting hcg to keep your balls happy. 250iu EOD or E3D. Both injections should be sq. You are also going to need an AI sooner than later to control the E2. It’s a deal breaker. Good E2=happy life. Bad E2=misery.

Ok, here’s my last test results from May.

Also remember lab testing is very dependent on timing. If you inject twice per week and test halfway between injections, then you get good, repeatable results and can make informed changes to the dosing. If you inject every two weeks when do you test? Day of next injection? Well that represents the absolute lowest T levels you’ll have. One week after T shot? That will be a good bit lower than the first few days but a good bit higher than the next few days. How do you make adjustments??

Im not sure about any doctor who thinks twice a months is a good injection schedule for testosterone cypionate. It has a half life of 8 days, It is almost gone in 15 days. He has you going from far to low to really high levels

I would guess that e2 may be countering your high T levels. Is your body fat relatively high at 254 lbs?.

Also your T levels are going to spike at 200 mg every two weeks (aromatize to estrogen/estradiol/e2) and then leave your e2 levels elevated while your T levels decline. 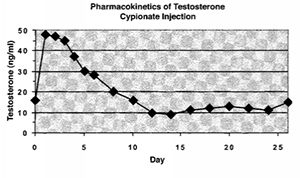 You should also get your thyroid tested: TSH, ft4, ft3 and rt3.

Yeah, we originally thought it was my Thyroid so we ran a bunch of blood work on that.

I’ve also had an MRI of my Pituitary to make sure it wasn’t enlarged or in bad shape. It was clear.

The last time I checked my BMI it was pretty high (~30%) but that was awhile ago. I also have a large body frame, I almost look like a linebacker lol. One of my main goals though is to lose the excess fat and build some muscle. I don’t want to be huge, but way better than I am right now.

I had same script once a week better, most docs will let you do at home nurse shows proper injection techniques. I 150mg a week now.