Hey guys just did a meet today, but far best in my life. First meet in wraps as well as not cutting. Weighed in 2 hours before at 188.7 and totaled 1692 with a 567 squat, 374 bench, 749 deadlift. Meet was a small uspa meet. Hit a 503 wilks and took best lifter. Let some room on squat to pull big and ended leaving a little in the deadlift probably could have gone 342.5kg. I will post a video soon in my training log and here. I wanted to post here since not everyone will see the log. Big plans for 2018. 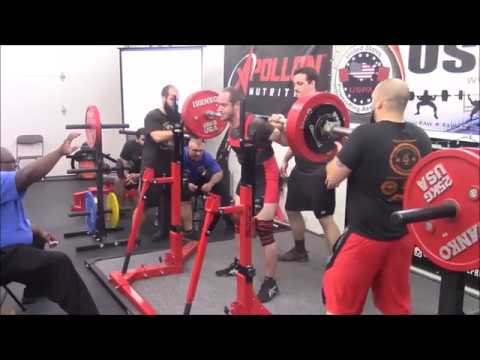 The press commands looked a little drawn out?
Either way, solid lifting man. Your deadlift is looking cleaner than ever.
800’s next year?

Id probably say they were had I missed the final bench. I didn’t expect much more so can’t complain.
Yes 800+ next year is the goal. Id like to set the 181 deadlift so high it will never be touched. I really think I can

You had a lot left in you on squats, that seconds attempt looked easy. If you weren’t prioritizing your deadlift then I’m sure you could get 600+. Nice work!

The press commands looked a little drawn out?

Looks to me like there was a bit of wobbling when the bar was on his chest on the 2nd and 3rd attempts, more on the 2nd and that one had the longest pause. Some feds seem to give the press command as soon as the bar touches your chest, not USPA.

I think possibly 590 would have been there but I didn’t have enough training in wraps to really try for it. 570 is the most I’ve ever walked out in wraps and is not easy keeping balance.

Did you break the deadlift record?

About your bench, I had to run so I didn’t get to finish what I had to say earlier. Try doing some long paused bench, like 2-3 seconds, and really focus on keeping everything tight as soon as the bar touches your chest. Some people like those for building bottom end strength, the biggest benefit I have found personally is that it makes you more solid at the bottom position and makes a slow press command seem like less of an issue. Leading up to my last meet I had developed a bit of wobbling on the chest, I did some 3 sec. pauses and it went away.

I’ll have to give it a shot. And no record yet though I think with the right attempt jumps and a cut I could have had a good shot at 766. I think I’ll be giving 770 deadlift a shot next month, would like to pull over 800 before June next year

First off, I want to say that this is one of the most impressive videos I’ve ever seen in my life, period. This is awesome, congrats!

Is there a reason why you choose to pull double overhand instead of reverse grip? I’ve noticed Layne Norton does the same thing (double over) even when pulling 700+. I’ve been doing conventional deads for the last 2 years (the entirety of my deadlifting career) and just recently switched to sumo, but for conventional I always used a reverse grip when I went heavy.

Obviously your grip strength is crazy but please explain why double over is preferable to reverse in sumo. Thanks, and congratulations again!

Thanks guys. Like the others said it’s hook grip. Puts me in a better position to pull. I even hold the bar lower in the fingers compare to any other grip style even straps.

Hopefully close to that at 181. But might be more on the deadlift and squat

It wasn’t in contest, but I remember @strongmanvinny2 pulling something like 675 double over with a hold at the end in training not too long ago. Correct me if I’m wrong man.

I look forward to the day when I can pull 4x bodyweight and say that I left something in the tank.

I missed out on that and the 9 times body weight literally by lbs. 6 lbs more on the pull would have hit both.

It wasn’t in contest, but I remember @strongmanvinny2 pulling something like 675 double over with a hold at the end in training not too long ago. Correct me if I’m wrong man.

Not sure if there was one. Vinny’s a strong ass motherfucker so I believe it regardless. It was earlier this year, so if there is a video, it’d be in his log.