Which will probably be around 350

I can definitely believe that getting somebody to film can be hard.

But a tripod on amazon is 15 bux, and propping it up on a wall is free. And if you’re not shy, you can ask a teammate.

Im more interested in seeing the squat video, and it doesn’t need to be maximal lift - send us any working set. On that note, the fact that you’re about to max out on Sumo because somebody asked to see a vid makes me believe you don’t have any structure to your training.

I do have structure and follow my program closely but I figured it is needs to be seen so bad I could just fit it in one day and just add some lighter accessory work instead of a regular program day, and I can get the squat video for reps at my house

Brother you are all over the place right now.

We would all like to believe you, because a small 15 year old lifting those weights is awesome. Except it’s really quite rare. What is much more common is a small 15 year old claiming to lift those weights while in reality he is at best quarter squatting, benching with his butt so far off the bench that you could fit a football under him and not touching the bar to his chest, while deadlifting with so much hitch it looks like he’s riding an uncontrolled jackhammer.

I’m not saying that’s you. Based on experience, however, it is quite likely that it is. You want to stop people wondering, post videos of you lifting reasonably close to the weights you claim you can lift.

Come back tomorrow for the videos then, u tell me anything u want to see and I’ll send it

You don’t need to take request for a lift. Take a video of whatever your next working set is as defined in your program.

Why are some of your numbers slightly off from your first thread?

This, right here, is what’s making me call bullshit.

But on the other hand I have to think, what on earth does someone gain from faking their lifts on the internet? Do we really live in an age where people need THAT level of gratification?

Which then leads me to believe that, perhaps, this kid isn’t bullshitting.

But I could be wrong. On both accounts.

What would be the best way to upload videos to here?

Here is the video of me doing a 295 pound squat today. I know the form may be a little rough and I am open to any criticism or suggestions on improving it. Felt like I could’ve definitely went higher but didn’t have a spotter, belt, and I wanted to get below parallel of course. The other core lifts will be coming by at least Thursday, I’m just not gonna pile them all at once. Weighed in this morning at 151.6. Thanks

Dude - way to come in here and prove it. Good job

New Plan/What to Do in Future

You think it’s a good idea to be sub-150lbs? Just eat until satisfied 3-4 times a day and limit the junk. You will start to lean out and get bigger when your first hair sprouts on your nutsack. No need to complicate it

This is the route I’m starting to agree with, at 15 years old, in reality I will not get fat off of mostly clean foods, but only stronger. Shouldn’t be wasting teenage years not putting on mass. I agree now

I’m still new to forums, wrong clip sorry the next thing will be the right one

**Before watching the video please read this: I am ready for whatever tips or hate come this way. I am well aware about my back looking like the Golden Gate Bridge and this is why I am not going to even attempt a new PR until my form is correct. Once I watched the video for the first, I instantly realized how bad my form was. With that being said I still thought I should post the video to back up what I said about being able to do it, even if it looks bad. Thanks

Well done, great numbers for your age. I was ready to call BS.

Relative to your strength you look small/like a normal untrained teen. Good thing is, def dont need to worry about getting fat. Eat a ton of quality food as already mentioned.

Broadly speaking you need more high rep work at least for assistance moves and to build your body up in general. Forget about maxing out/testing your strength/1RMs etc for like at least a year. 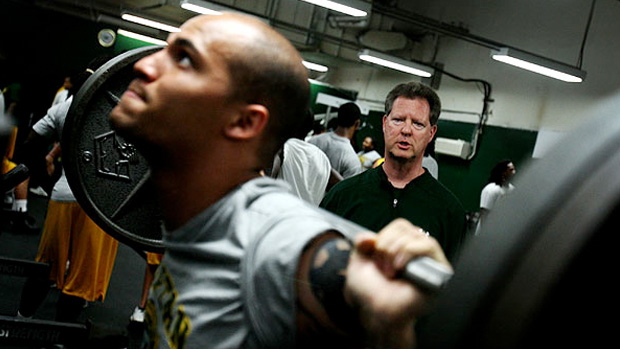 A heavy bar across your back and peanut butter sandwiches in your belly: it's time to build mass the Dan John way!