Hey, just had some recent bloods taken & need some advice if possible.

I’ve been on TRT for little over a year now, I’m a 25 year old otherwise reasonably healthy male, from the UK. I was put on treatment due to low level reference range Testosterone, along with the symptoms of severe tiredness, general wellbeing, erectile dysfunction, lack of libido, excessive sweating.

I’ve previously tried differing protocols, I originally started on Clomid before injectables. When moving to Sustanon, at first I injected 250mg fortnightly (as recommended by the DR), I only did this for 2 weeks as saw it wasn’t ideal (I was much less clued up then) then did 125mg weekly before moving to where I’m at now. I’ve also done different doses of anastrozole - tried 1/2 twice weekly, 1/4 twice weekly & seem the best on 1/4 once fortnightly/weekly, I feel I can judge when I need it now to avoid crashing, as I have done previously. I added HCG in about 4 months ago, this was for fertility reasons & also because I was looking to start a PCT, more about this later.

Anyway, here’s my most recent bloods; these were taken Monday Morning before my injections. 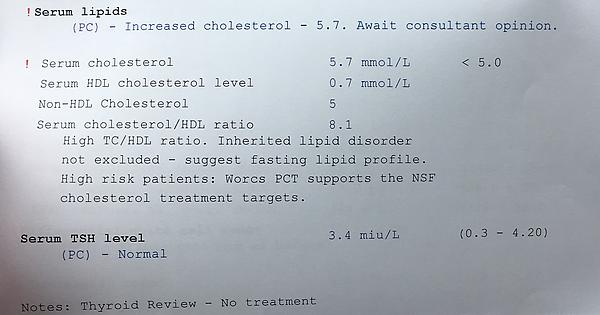 (Hopefully 3 pages have attached), I was surprised on a few… this is the first time my estrogen has been in reference… I’m in the UK, so a sensitive essay isn’t available, but I’ve never been within reference, most surprised as this is with HCG being in addition to my protocol, and me being on a lower anastrozole dose too.

My concerns are with my haematocrit & RBC, and my lipid panel. I’ve had higher haematocrit than here since being on TRT, I do give blood every 3 months to try and lower this, but even after a blood donation it’s still just above the reference range. My last blood donation was 18th June, so end of September will be my next.

My cholesterol is high which along with haematocrit is concerning me, and someone else raised an issue with my TSH being quite high at 3.

Again, they are within reference but quite raised, or so I feel. My lifestyle is pretty healthy, I’m quite active and especially last year at the time of my previous bloods I was around 13.5 stone, doing 8 miles of intense cycling daily & my diet was very good, I was quite fit, I don’t drink excessively & don’t smoke… there’s also no history in my family related to cholesterol or heart disease.

This year, I’ve not been keeping the cycling up, and have creeped up to 14 stone, my diet’s still pretty good with sensible meals, no excessive junk food & I’m still active, mainly walking.

So I can’t pinpoint it, especially going by last year when I was at the fittest I’ve been.

I still suffer now with severe anxiety (worse than before) and slightly improved erectile dysfunction & lack of libido.
The best I’ve ever felt, was 2 weeks into Clomid, 2/3 weeks once I stopped Clomid & 2 weeks after starting injections, so I’m missing something somewhere & catching it either with my natural levels alongside before shutdown, or an imbalance somewhere… my worry now is whether the erectile issue could be down to my cardiovascular system, unsure if atherosclerosis possibly at this stage? LDL:HDL ratio seems pretty poor.

Also, keep noticing my white blood count raised, on my last 3 tests… I seem more susceptible to colds/illness since TRT - I’ve seen this before as a side effect, but only for a couple of months whilst the body adjusts?

Sorry if this message may seem a bit all over the place, I’ve tried to include my journey so far, dig out old bloods & decide whether TRT is causing me more harm than good possibly. Whether my Sustanon dose should be lowered, or whether to revert back to Clomid again at a lower dose than before to avoid taking anastrozole alongside, I still feel that I felt best on Clomid mentally, just not solving my erection/libido issue…

Would appreciate any help, and if I’ve missed anything.

Is your TSH high because of low iodine intake. Iodized salt is available there, but not typically in most shops. If not eating diary and eggs, you are at higher risk.

Ferritin is low suggesting low iron, but that conflicts with other blood work. Low ferritin can impair fT4–>fT3 conversion.

Please read the stickies found here: About the T Replacement Category - #2 by KSman

Evaluate your overall thyroid function by checking oral body temperatures as per the thyroid basics sticky. Thyroid hormone fT3 is what gets the job done and it regulates mitochondrial activity, the source of ATP which is the universal currency of cellular energy. This is part of the body’s temperature control loop. This can get messed up if you are iodine deficient. In many countries, you need to be using iodized salt. Other countries add iodine to dairy or bread.

KSman is simply a regular member on this site. Nothing more other than highly active.

I can be a bit abrupt in my replies and recommendations. I have a lot of ground to cover as this forum has become much more active in the last two years. I can’t follow threads that go deep over time. You need to respond to all of my points and requests as soon as possible before you fall off of my radar. The worse problems are guys who ignore issues re thyroid, body temperatures, history of iodized salt. Please do not piss people off saying that lab results are normal, we need lab number and ranges.

The value that you get out of this process and forum depends on your effort and performance. The bulk of your learning is reading/studying the suggested stickies.