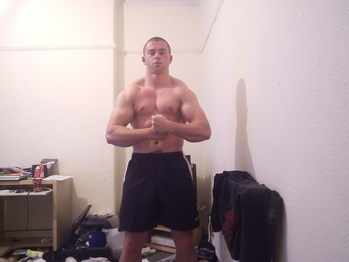 Alright fellas! I’m new here and been lifting off and on for around 2.5 years on a split routine (about 1.5 with a half decent diet. I’m from England and started training mostly for rugby strength- but recently been trying to add some mass. I know my physique is far, far from startling, but I’m after some constructive criticism at this stage to help me develop a better body!Cheers for any comments guys! Rich 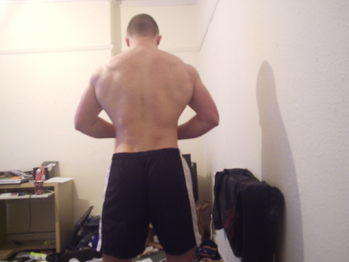 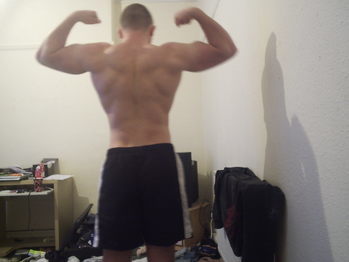 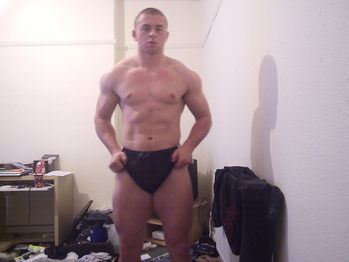 Seem to be well on your way, chest looks a little under-devoloped…other than that your pretty swole for a year and a half…

You look pretty powerful and strong. What are you benching, squatting, and deadlifting?

Damn good numbers! Just keep doing what you are doing and working to add weight on your lifts.

Great back/waist ratio. Chest doesn’t look that bad to me, but this is coming from someone who also has a weak chest. Bodyfat is definitely not 18% or we wouldn’t be able to see your abs. Try 10-12%.

Your chest looks smaller and lags behind because you’re like me. You have strong calves I bet? From what I understand, if you’re endowed with the calves, then your chest naturally lags behind. I don’t know why, it’s morphology.

Same goes vice versa, if you have tiny calves you will have a propencity for a big chest.

Yeah Sikkario, my calves are pretty decent; at least compared to my chest, which seems to lag behind that of every bicep/chest boy at the gym, lol.

damn dude good job so far id say youre pretty good where youre at now…but im not one of the people who rates contra to ronnie coleman. anyway you definately look strong so keep doing what youre doing, im in the same boat as you when it comes to chest…so if you find something that really works let us know.

Yeah mate- at the minute im doing 3 sets flat barbell bench, 3 sets dumbbell incline, 3 sets weighted dips. Gaining strength but not much size. Reps usually 6-10 range- any advice on what the prob might be? Perhaps up the reps?

[quote]pia06rc wrote:
Yeah mate- at the minute im doing 3 sets flat barbell bench, 3 sets dumbbell incline, 3 sets weighted dips. Gaining strength but not much size. Reps usually 6-10 range- any advice on what the prob might be? Perhaps up the reps?[/quote]

Mix things up on chest. One week on chest day start with incline for four sets instead of three, then do flat, then dips. The next week switch it up again. Hit chest twice per week such as on Monday and Friday. Blast it from every angle hard with compound movements and finish up with some cable chest movements. That should stimulate some new chest development.

good development overall! Your back is great. I think if you took photos with better lighting there would be more definition. My chest also lags behind everything else- I guess we all have to have a weaker body part.
Paul

That seems like sound advice,Dedicated. Maybe my chest routine has become a little one-dimensional because i have a tendency to assess progress in terms of the weights im pushing, not mass gains, which is what i’m now after!Thanks for the comments people

Looking good man, I feel your pain on the chest.